You are here: Home / Blog / Uncategorized / I lied

Well, it wasn’t so much lying as it was not being able to do simple math correctly.

Remember yesterday when I said I had cut twice as many strips as I needed? Well, it turns out I was right the first time and I actually did have to do all of the sewing that I thought I might be able to cut in half. Or something like that. Even still, it is quick sewing:

All of the rows (for both quilts) are put together, and some of the rows are even sewn to each other! I have a green stripe to use as a border and more of the cherry print for an outer border. Our school colors are Red and White — I decided this cherry print was just too cute not to use.

It snowed here today. The kids got dismissed from school an hour early — the boys had already been invited over to a friends house, so they just got to go there earlier than planned for a really fun afternoon of sledding. They came home soaked, but happy.

I tried to get a good picture of Katie in the snow, but she wasn’t interested in participating:

Today’s journal page isn’t going as well as I would have liked. I’ve been thinking about it all day long — we were supposed to consider Christmases past — the good and the bad. I’ve either got a really faulty memory or I’m just really lucky, because I don’t think I’ve had any Christmases I could consider BAD.

The journaling pretty much wrote itself, but I’ve been really struggling with how to deal with laying the page out. I don’t need it to be spectacular today, but I’m just not coming up with anything that makes me happy. Sometimes the simplest, most elegant solution is the hardest, isn’t it?

Plus, something family related has come up that has caused me to be worrying and pretty much unable to concentrate this evening. I went away to go sew some more, hoping for inspiration to strike, but I’m still waiting for that particular lightning bolt.

Ok, for better or for worse, here’s Day 6. I probably should have given up sooner, but apparently I’ve got this competitive streak (with myself only) and I can’t seem to let go of these. 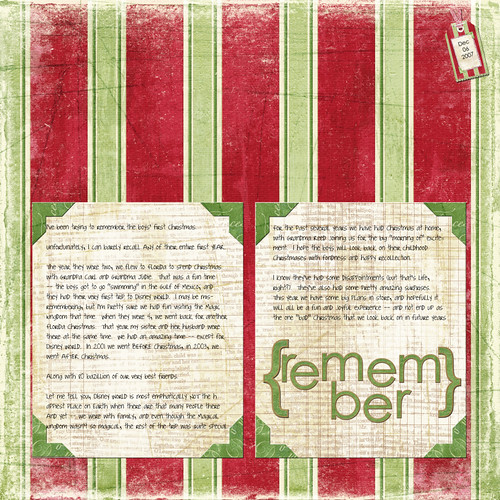 Here’s what the journaling says. Copying and pasting it here, I found a few typos. Oops.

I’ve been trying to remember the boys’ first Christmas.

Unfortunately, I can barely recall ANY of their entire first YEAR.

The year they were two, we flew to Florida to spend Christmas
with Grandpa Carl and Grandma Judie. That was a fun time
— the boys got to go “swimming” in the Gulf of Mexico, and
they had their very first trip to Disney World. I may be mis-
remembering, but I’m pretty sure we had fun visiting the Magic
Kingdom that time. When they were 4, we went back for another
Florida Christmas. That year my sister and her husband were
there at the same time. We had an amazing time — except for
Disney World. In 2001 we went BEFORE Christmas, in 2003, we
went AFTER Christmas.

Along with 80 bazillion of our very best friends.

Let me tell you, Disney World is most emphatically NOT the happiest place on Earth when there are that many people there
And yet — we were with family, and even though the Magical
Kingdom wasn’t so magical, the rest of the trip was quite special.

For the past several years we have had Christmas at home,
with Grandma Reed joining us for the big “morning of” excitement. I hope the boys will look back on their childhood
Christmases with fondness and happy recollection.

I know they’ve had some disappointments (but that’s life,
right?). They’ve also had some pretty amazing surprises.
This year we have some big plans in store, and hopefully it
will all be a fun and joyful experience — and not end up as
the one “bad” Christmas that we look back on in future years

oh shoot. i was going to find the links to the advent calendars that i pictured in yesterday’s page. on the list for tomorrow…….