I started the morning by yelling at a lady at the hotel breakfast, and unfortunately, she didn’t deserve it. Oops.

The view out my hotel room window: 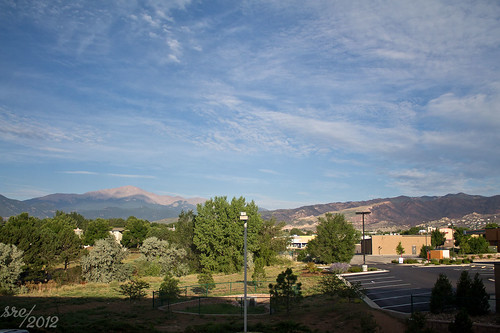 After we got ourselves going, we headed off to the Garden of the Gods. It is a really neat park maintained by the City of Colorado Springs — it is free to visitors!

We walked quite a bit, watched climbers attempting various difficulties of climbs, and just generally looked on at the rocks in amazement. Supposedly a rattlesnake was spotted, and Mark and the boys were disappointed not to catch a glimpse. I think I could happily live my whole life without seeing a rattlesnake that wasn’t on the other side of a piece of glass. 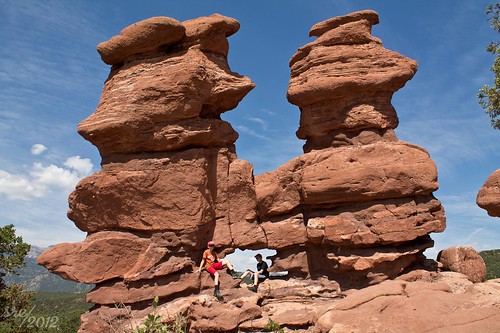 Will and Joe were super-thrilled to learn that there was a formation known as the Siamese Twins, and that they’d be required to pose with it.

This whole area of red rocks just sticking up, seemingly out of nowhere, is pretty remarkable. The whole, time, though, we can see Pike’s Peak off in the distance, calling to us.

After some lunch, we headed up. We debated about taking a cog-wheel train ride to the top, but at $35/person, Mark decided he’d rather drive. ON the way up, and back down, there were many times when I couldn’t even LOOK, especially when I was the person on the outside!

I always think about mountains having HEIGHT, but I forget that they also have WIDTH, too. A really tall mountain, is also pretty big around! The road winding up was really something. Mark remembers going up with parents, but he’s pretty sure that at the time, it was just a dirt road at the time.

In some spots, the trees are so dense, you can’t see much, but then you hit the tree line (somewhere around 11,500 ft), and the trees are gone nad you are in the Arctic Tundra landscape: but you still have many miles to go before you hit the peak. It was also really interesting to watch the temperature fall all the way up to the peak, when we got there, some of us pulled out long sleeves, it was so cool! 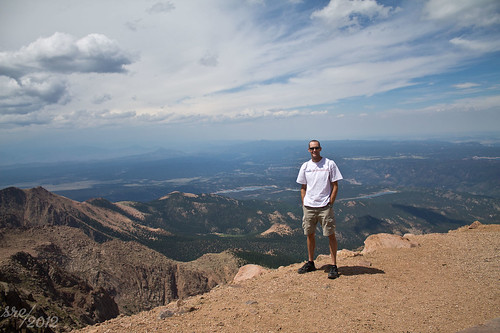 After a visit to the store and some high-altitude donuts, we made our way back down. Some of us were getting a little headache-y and not having quite as much fun.

We were forced to stop in the middle of the road to watch a family of big horn sheep cross in front of us. 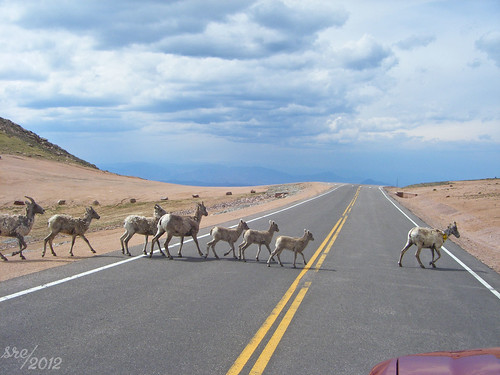 We hit the mandatory brake check at the halfway point — we watched the 3 cars in front of  us get pulled over for overheated brakes, but he said “Awesome, you are good to go,” when he checked our truck.

And if all of that wasn’t enough, we headed back to Colorado Springs and out to a place called Seven Falls. 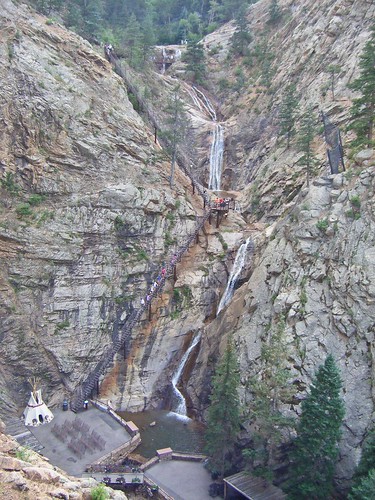 It was pretty neat, but I totally freaked out when I started climbing the stairs that you can see in the photo. (There are 224 steps in that staircase). I got up about 20 steps and decided that I was done — it wasn’t so much the climbing of the stairs, as it was thinking ahead to when I had to descend the stairs that did me in. I stayed below, in the benches and watched a demonstration of Indian dancing. I think we were also a bit tired, and overstimulated. At least, I was.

Food Report: KFC/A&W for lunch, cheeseburger #4 for Will. Supper was at Village Inn, good food but horrible service. The waitress introduced herself saying “Vanessa was supposed to take care of you, but I guess I’m going to do it instead.” It was downhill from there.

Accommodation Report: Same Quality Inn as previous night. Mark got to sleep alone, Will joined me. I swear that he is made entirely of elbows and knees.

Here are some selected photos from Day 3: