So, I bet you though this was going to be like 2 summers ago when I started posting about my vacation and then never finished it.

Well, it may yet turn out like that, but the fact of the matter is: I’m still overwhelmed by the photos, plus, school starts in a week, and I have a bucket load of work to do. Add in needing to watch the Olympics, and a quick trip to Pittsburgh for a family reunion (and 300 more pictures!), and phew. Oh, and I picked up a cold.

But never fear, I’ll keep plugging away on this vacation report. I’m still several days away from the really interesting stuff!

We planned a somewhat circuitous route through Colorado so that we could see some interesting things along the way.

Our first stop was Royal Gorge. Frankly, I think we wasted our time making this detour. Sure, it’s a beautiful place, and the bridge is amazing, but in order to walk on the bridge, a person has to pay $26. Each. That gives you access to their amusement park, and we were not interested.

We were directed to an overlook, where we got some neat pictures, and then we were on our way. 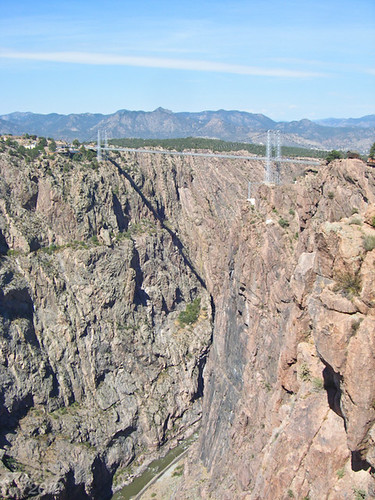 We were ultimately headed for Mesa Verde National Park, but Mark had spotted Black Canyon of the Gunnison National Park on the map, so we detoured through there.

Holy Wow. What a gorgeous place. A must see.

It rained a bit, and the boys managed to catch the first Double Rainbow of the day: 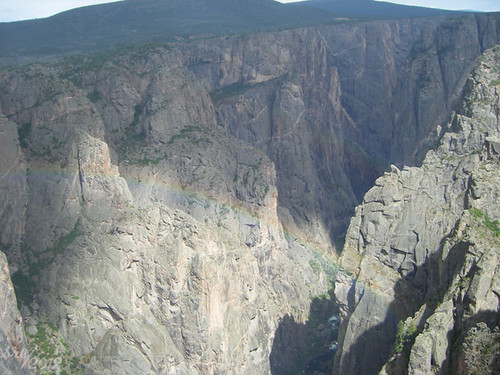 (The top one is super faint, but it’s there).

Because we were short on time, we mostly stopped at overlooks, but we would have liked to have had more time to hike and really look.

After we’d had as much time as we could spare at the rim, we headed to the river, on a super twisty, steep road (16% grade!). We were a little concerned, and almost didn’t go, because vehicles over 22 feet are banned: our truck is almost exactly 22 feet long.

We are sure glad we went, because while there wasn’t much to look at once we hit bottom, when we came back up, it rained again, and we saw our second Double Rainbow of the day: 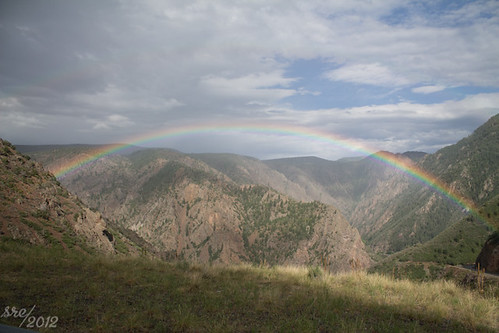 Again, the top one is really faint, but it’s there.

We actually pulled over to look at it, we could see exactly where it was touching the rock on the left, and the road that we had just driven on the right.

After that, we were back on our way to Mesa Verde, and would you believe it: we saw our THIRD double rainbow: 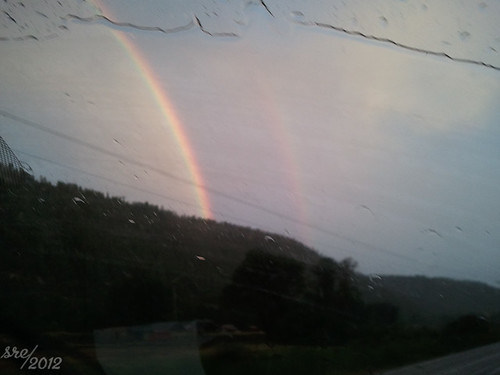 I should have also kept a tally of the deer that I saw. There were a bunch. We would have loved more time at Black Canyon, but we had several more hours of driving until we hit Mesa Verde National Park. We drove through mountains, and it was so gorgeous. The whole time we are asking ourselves “And we live in Iowa, why?”

We were staying at the hotel in the park, and got to the entrance at about 9, but then had to drive 15 miles in to the park in the DARK. It was so spooky. Lots of hairpin turns up steep slopes, that we couldn’t see. I thought we were maybe in a horror movie. We finally made it to Far View Lodge at about 9:30 or so, and after snacking for supper, we hit the sack.

Accommodation Report: Far View Lodge is older, but it was clean. The shower was almost claustrophobic, but it did its job. I didn’t make a note of who I had to sleep with. It must not have been Will.