We  arrived home on Wednesday from our 2 week vacation to points west. I made notes and we took tons of pictures along the way — I’m going to type up my notes and share them here, not because they are all that fascinating, but because the boys asked me to share what I wrote with THEM, and there might be a few interesting pictures and stories along the way for other people, too.

Our ultimate goal was the Grand Canyon, but it took us almost a week to get there. The most interesting part is the GC stuff, but we did some cool stuff along the way, too.

Our first day out was Thursday, the 12th. We only drove as far as Mark’s Aunt and Uncle’s house in Nebraska. Will and Joe had a really good time playing with rubber band guns and also got to have some (supervised) fun with some of Uncle Dale’s other guns. I think they were shooting at sticks in the creek. (My family is fascinated by things that shoot, but not in order to shoot at people or critters, they just like watching things blow up).

I didn’t manage to take a single decent picture of them with the rubber band guns, but one of my favorite pics is Mark with a rubber band on his fingers: 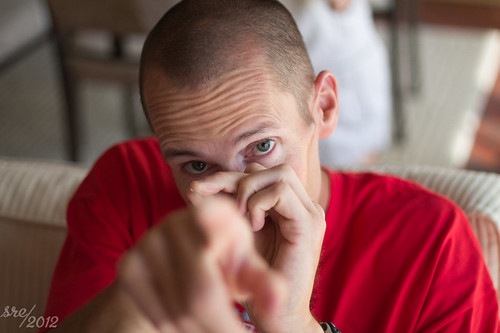 Mark’s cousin and her family joined us for supper, and we were entertained by her girls. The last time we were in Nebraska, the littlest one was a day or so away from actually being born. Now, she’s a busy, chattering two-year old. Her older sister is very sweet, and unfortunately even the best pictures I took of her weren’t that great. (It was me and my camera settings, not her. She’s very photogenic.)

My absolute favorite picture of the day, and one of the best I think I’ve taken, is of these two: 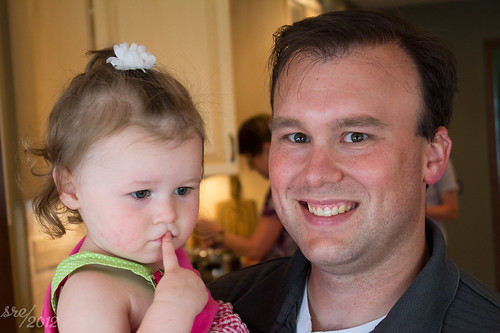 Sometimes, you point the camera at someone and you just get lucky, capturing such great expressions and detail.

Mark and I took about 1200 photos over the entire 2 week vacation, and it’s a little daunting to look through them all, wondering which to share and which to delete and what not. My plan is to include a thumbnail gallery of some of my favorites each time I post, you can click on the thumbnails to embiggen.

Food Report: We stopped at McDonald’s for lunch. Will had his 1st cheeseburger of the trip. This will become a theme.

Supper was a our last home cooked meal, and it was delicious. Pulled meat (pork? I think?), and other stuff that I can’t even remember.

Between 2 cellphones and 3 cameras, apparently neither of us took a single picture on the 13th. All we did was drive and drive and drive. Nebraska is full of really nice people, but it is really boring to look at, at least along the Interstate. Also, there was a ton of road construction.

Nearly as soon as we had left our house, Mark started making noises about mountains.

Mark: Is that one?
Me: NO.
Mark: How about that?
Me: NO. And furthermore, I forbid you to even mention mountains until I tell you that you may discuss mountains.

And when I say “that,” you should substitute “great big pile of sand.” Or “bridge.”

I had to tease him, though, when I saw a truck whose logo was a mountain…

It’s funny, then, that when you see something, it’s foothills — not even actual mountains, yet. Of course, even the foothills look pretty amazing to our Iowa-eyes.

We eventually reached Colorado Springs, and picked a random hotel near Garden of the Gods. After supper, we fell in to bed, excited about the “real” start of our vacation the next morning.

Accommodation Report: Quality Inn. Comfortable and clean, not too expensive. We got a 2 room suite. The nicest part was having two bathrooms. Joe slept on the couch, Mark and Will shared a double bed, and I slept alone, blissfully.