You are here: Home / Blog / Quilting / One of Yesterday’s Photographs 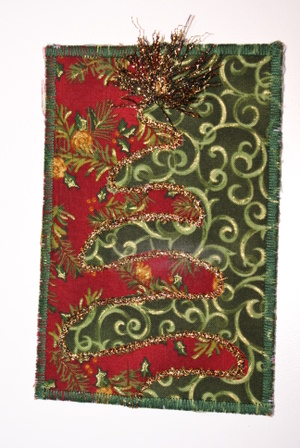 Here’s the postcard I was bragging about receiving in yesterday’s post.  It’s from Vicki.  I was so excited to get it!

I can’t seem to get my other picture to upload today and I’m again out of time to deal with it right now.  I’ll try again later — I’m off to the Holiday Program at school.

Later in the day…

Yahoo — I seem to be able to upload more pictures, finally.

The first is my very photogenic nephew, Colin.  I believe that he was looking up at my equally photogenic son (one of them, anyway…) 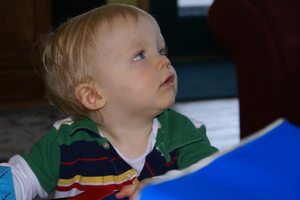 Last is a picture of the 3 cousins.  We have heard that there is a possibility that the other 2 cousins might be here in the spring — 5 cousins together — won’t that make for a cute picture???  The boys were pretty fascinated with their year old cousin.  He’s a lot more interesting than he was the last time we saw.  Yes, he was adorable then, but he’s starting to talk and is crawling and is just really quite brilliant for a year old boy….

Well, the school Holiday program is over and I just got through with 45 minutes of arguing with long distance providers (and being thoroughly annoyed by them…), so it’s probably time I attempted to do something useful today.   I didn’t intend for this blog to just be a record of the cute children in my life, but I guess life often has other plans for us, doesn’t it?  I did actually  manage to do some sewing last night, so I shouldn’t complain too much.  Hopefully tonight or tomorrow I’ll actually get some longarm quilting done.  I have so many ideas for quilts and clothing and a gazillion other things — I need to keep them all in mind for when I have time for them.

*****Even later in the day.  Good grief.  The other picture was here before, honest.  Here it is again.  I don’t know what happened to the darned thing. 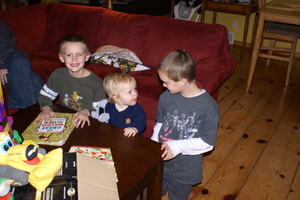