You are here: Home / Blog / Photography / Playing with Photoshop

Computers are so much fun when they work.

A few weeks ago the boys were looking for something to dress up in.  We really don’t go anywhere that requires "nice" clothes, so they had to make do with some plain dark shirts and jeans that are really too small.

Afterwards, a request was made:  shirts and ties (and new jeans that fit).  Specifically, Joe wanted a WHITE shirt and a RED tie.  Hmm.  Is he joining his mother in her red obsession? I guess I’d better add "RED" to the category of this one….

His brother decided a blue tie would be OK.  I found some ties online, but wasn’t sure they’d be here in time for today’s holiday concert.  Boy, were we excited when they arrived on Monday!

I also managed to find the new white shirts and brand-new crisp blue jeans for them last week, so they were all set for today. Oh — new belts too!

I took some pictures this morning, and have just had some fun figuring out how to make Joe black and white but leave his tie RED.  Pretty handsome, isn’t he?

I tried to include Will in this shot, but his tie is Navy Blue and you wouldn’t have been able to tell it was any different than black.

I did play with the photo with some other filters, too, though.  Isn’t this one crazy?  I think it’s called glowing edges.  Makes their faces really spooky, but it does highlight their ties really well. 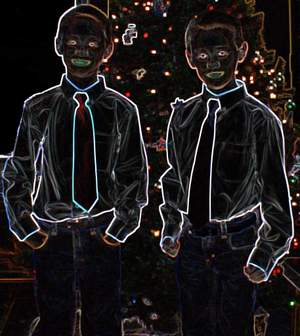 I also figured out why I was having so much trouble uploading pictures earlier.  I thought I was exporting them to a folder in a smaller file size, but it turned out I was trying to upload the large files, so no wonder it was taking forever and acting like it was working….like I said up at the top — computers are fun when they work right.  Oh wait — they are fun when the USER works right….