Today was the last day of the 1st semester. 7th grade is HALF over. HALF. Crazy.

The basketball season only holds 5 more games, which is hard to believe, too. Tonight’s game was a loss, but it was a “good” loss. The first time they played this team, they lost by, like, 20. Tonight, the final score was (I think…) 36-29. And they completely shut the other team down in the 4th quarter. They used a different defense, it and worked like crazy. They have made a ton of progress this year, and are really working as a team, which is exciting.

Today’s picture is a shot of the teams’ feet while they were over talking to the coaches during a timeout. 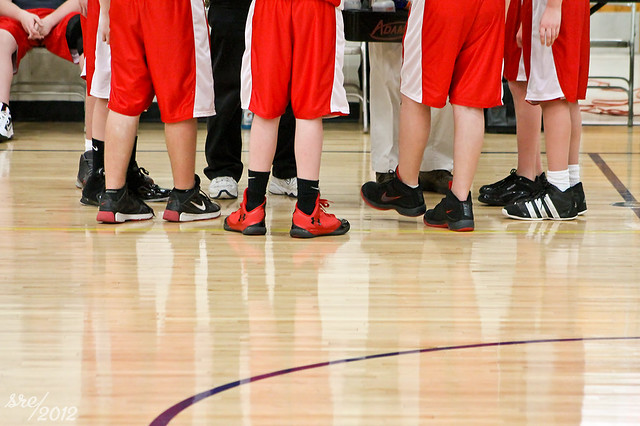 I saw this kind of shot from another photographer on Flickr. I really like the reflection in the shiny floor.

With the end of the semester comes the start of a new semester — we have been processing schedule changes like crazy, and at one point, I called the guidance counselor and she said “Are you sane?”

Not in the least.

Students have through Wednesday to make changes, but hopefully we are almost at the end of that tunnel. Then, I get hit by the Report Card Train.