The photo prompt for today is FLAKES.

Well, there are exactly ZERO snowflakes on the ground here in Iowa, so I naturally thought of the boys.

Only, that seemed too obvious. I was paging through photos on Flickr and saw a photo that was really cool, so I talked the boys into experimenting with light painting with me. We are very new at this, and need some more practice, and technique refinement, but we did have fun!

My favorite is this one: 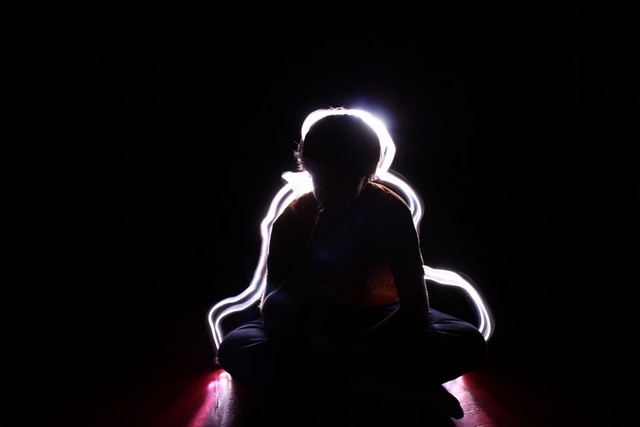 Will outlined Joe from behind with the flashlight.

Joe’s favorite is this one: 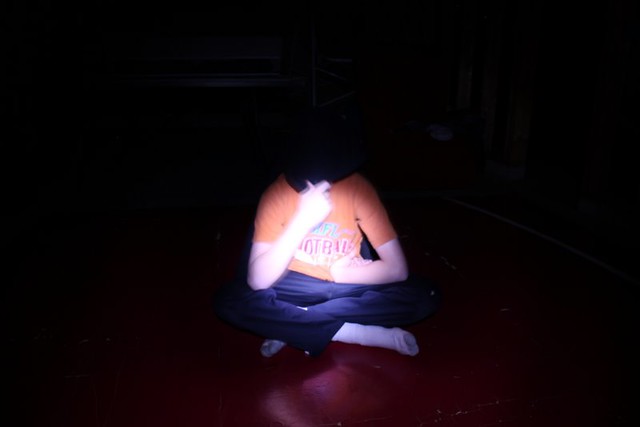 He wanted to look like he was headless. I just shined the flashlight on him from in front.

It definitely takes some thought and planning, and in some, we could have set the shutter speed longer, because we didn’t have enough time to complete whatever we were drawing.

I’m going to definitely remember this technique for future photos, though, because I can see where this would come in handy on a night when it’s late and the light is gone — light something with a flashlight!

(I know, you are thinking…why don’t you just turn on the flash if it’s dark? Well, I’ve become quite opposed to using my flash, because it is so harsh. My photos are generally TONS better when lit with external light sources…when I can…sometimes the flash is the only option, but having this flashlight trick is going to be useful. Of course, it requires a really long exposure time, so it’s not meant for action shots…)

So…what did we do? I set the camera up on a tripod, and I put the camera on manual mode. I set the shutter speed to anywhere from 15-25 seconds, some of the shots we could have used 30 seconds, some could have been done in 10. We had a flashlight and someone would just stand up and draw something in the air, turning the flashlight on and off as necessary while the shutter was open.

There are a ton of really cool light painting photos on Flickr. Several of the things I tried were inspired by photos from that search, and I can tell I will have to come back to this gallery, and this idea again!