I meant to get another post done yesterday, but didn’t feel great…but I’m mostly back in action today.  Mostly. 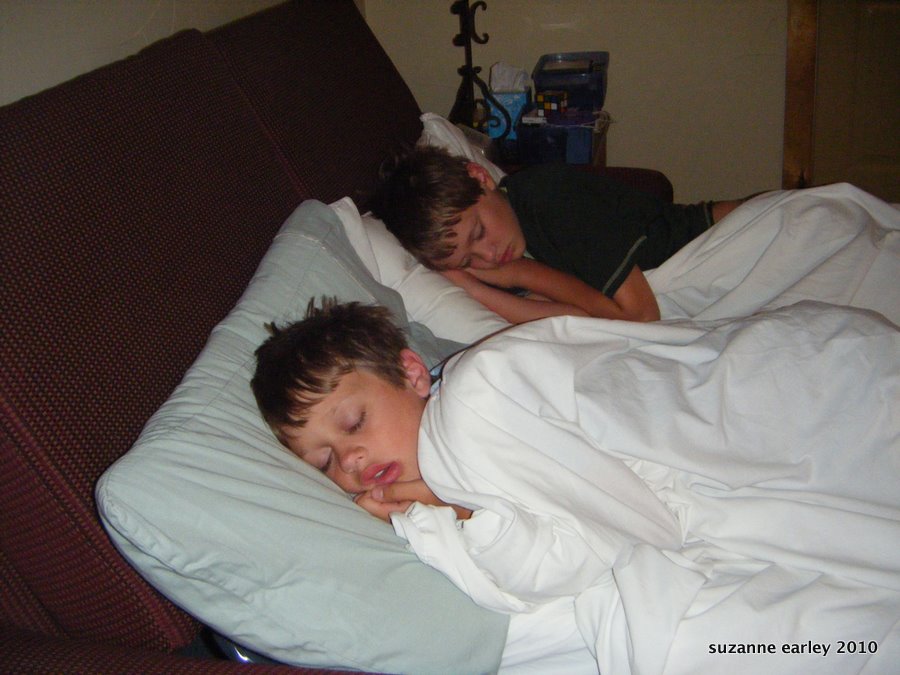 And headed back into Rocky Mountain National Park for a little bit more hiking before we hit the road.

We decided on taking part of a trail along the Colorado River.  Before we could get started, though, the boys found sticks to use as walking sticks: 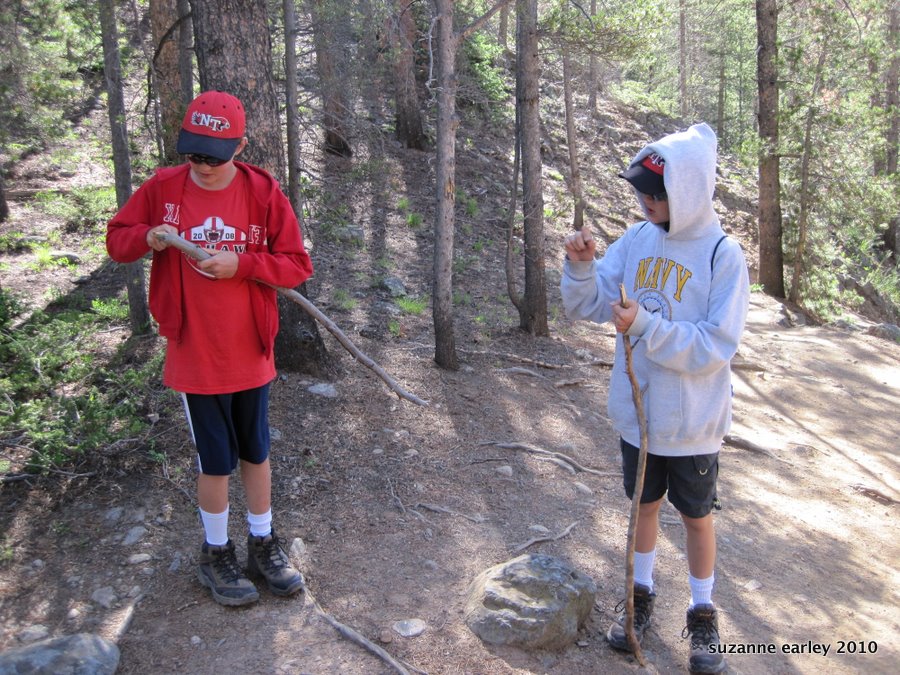 They’d gotten pocket knives at the gift shop the day before, and they desperately felt the need to USE those knives. 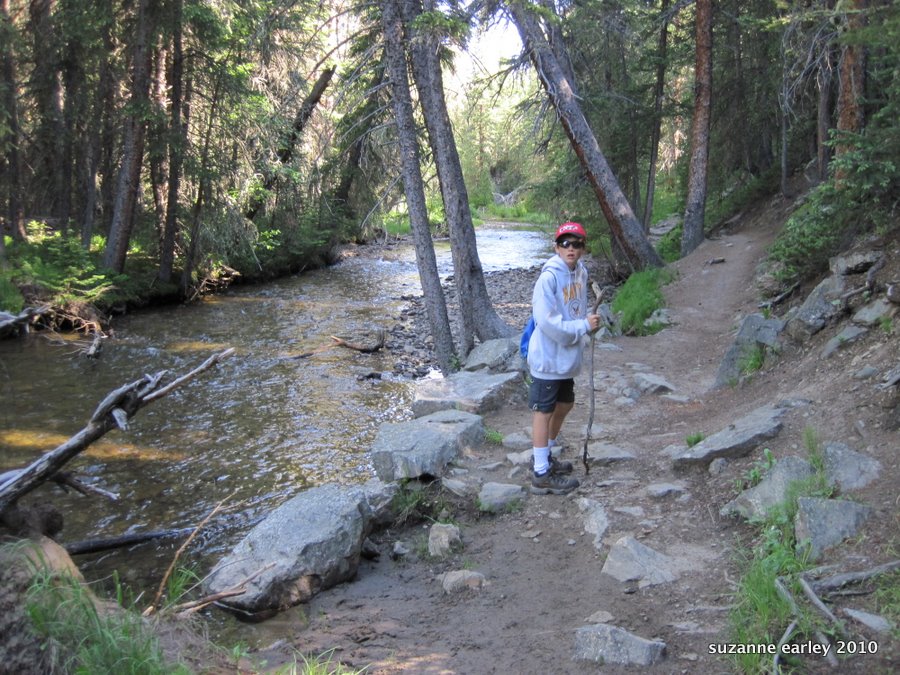 It was so beautiful and peaceful — there were hardly any people.  The day before was a more popular trail, and a lot more people (and every 3rd or 4th group seemed to be from Iowa.  Mark had on an ISU shirt, and lots of people commented…).

Every time someone stopped to catch her breath, she’d turn around and find a boy working away at his stick. 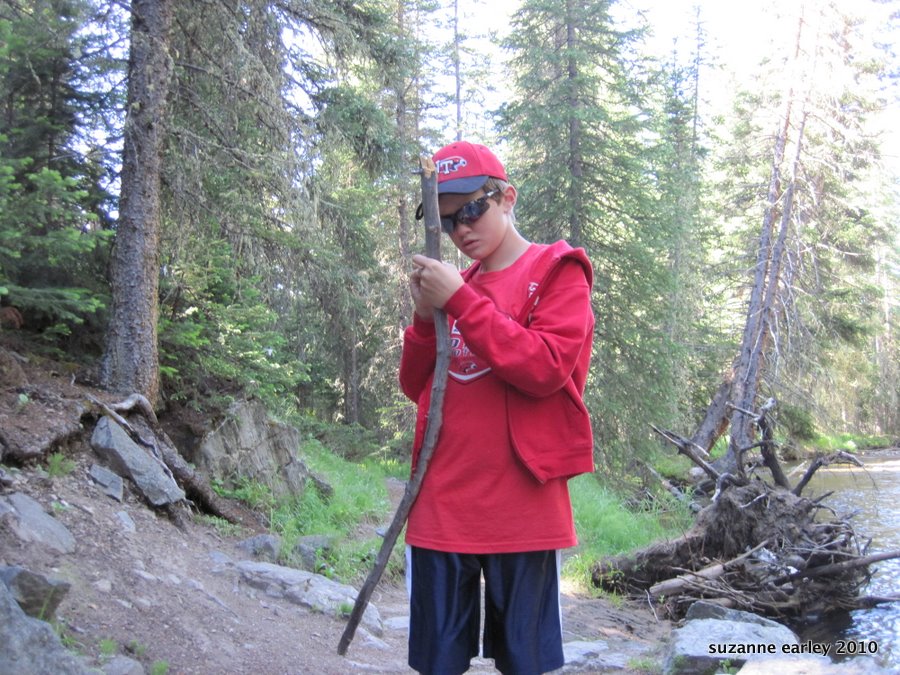 Hey, it kept him happy!

This part of the park was quite different from where we’d been the day before — the trail we were on was almost completely flat, with hardly any elevation change.  It was almost entirely forest, with just a few open meadows.  It was also kind of fun to see the river near its beginning.  It was quite narrow and shallow, but moving swiftly.  And so very clear! 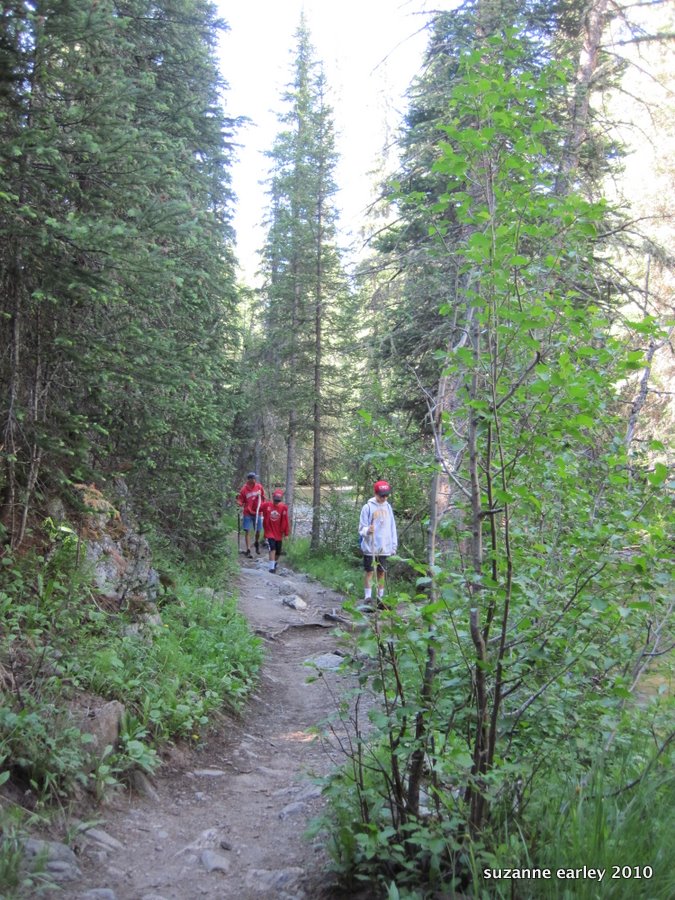 We also got to see several areas of rock fall, the boys climbed part way up one of them.  The sun was in the wrong place for me to get very good photos. 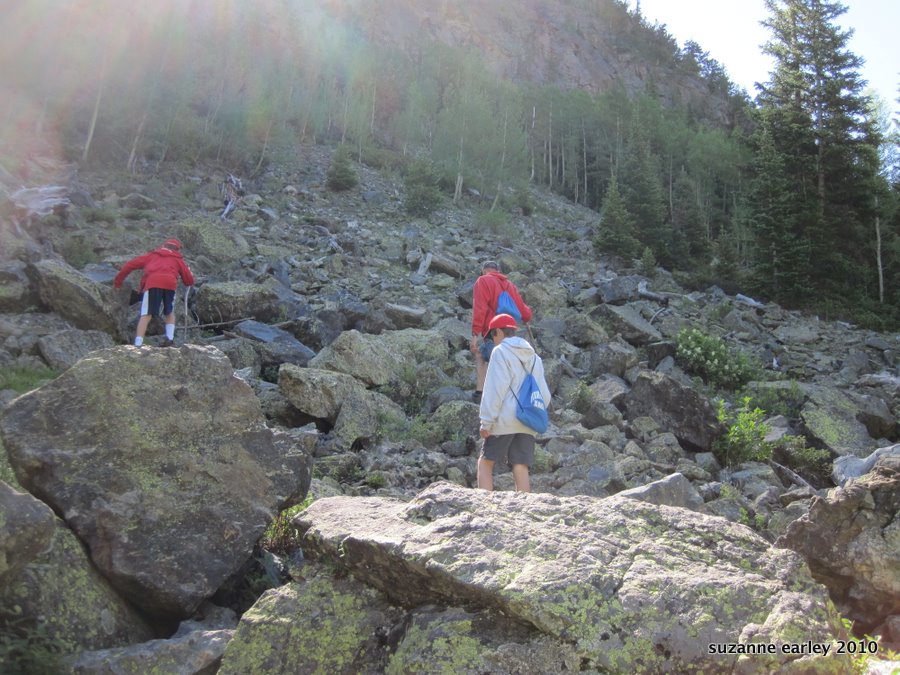 Mark is taking a picture of me in this one: 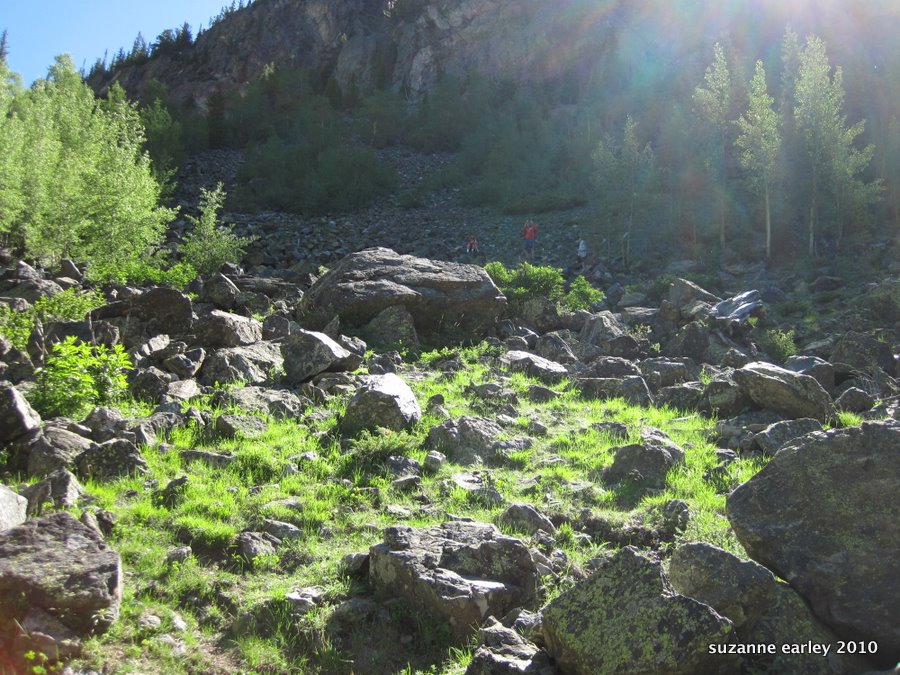 And here I am, smiling up at him. 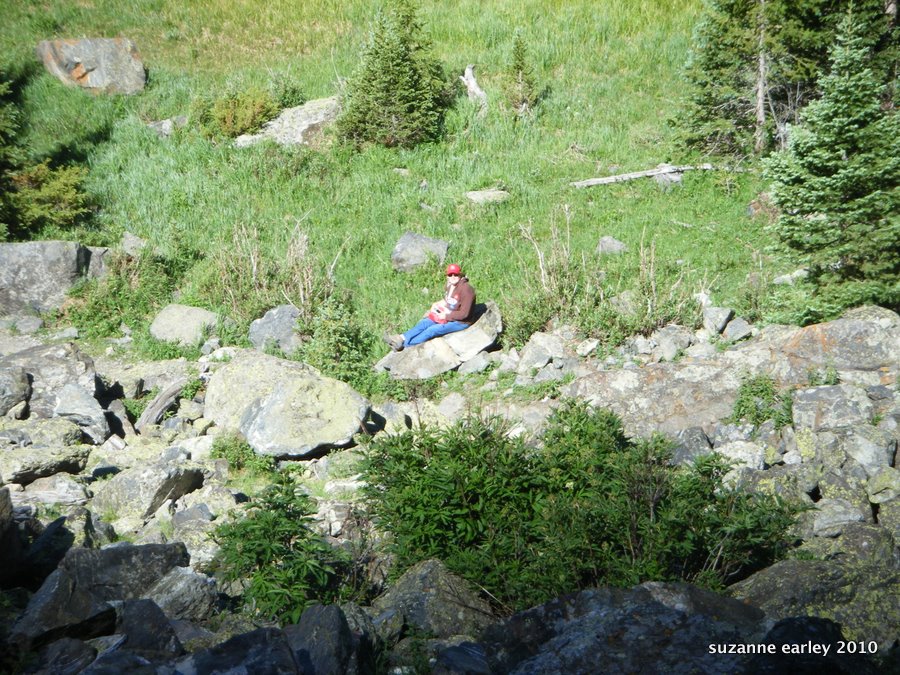 I was grateful for my sweatshirt and jeans.  It was really cool, except for when we’d step out of the forest and be hiking in the sun, of course.

Not much in the way of wildlife on the walk.  We did see several deer and elk on our drives, and some of the pictures from the day before show the marmot we saw way up on the arctic tundra.

We didn’t follow the trail all the way to it’s measured end, so we don’t know exactly how far we went.  Crater Creek is where we turned around, we estimated that the round trip distance of this particular hike was about 3.5 miles. 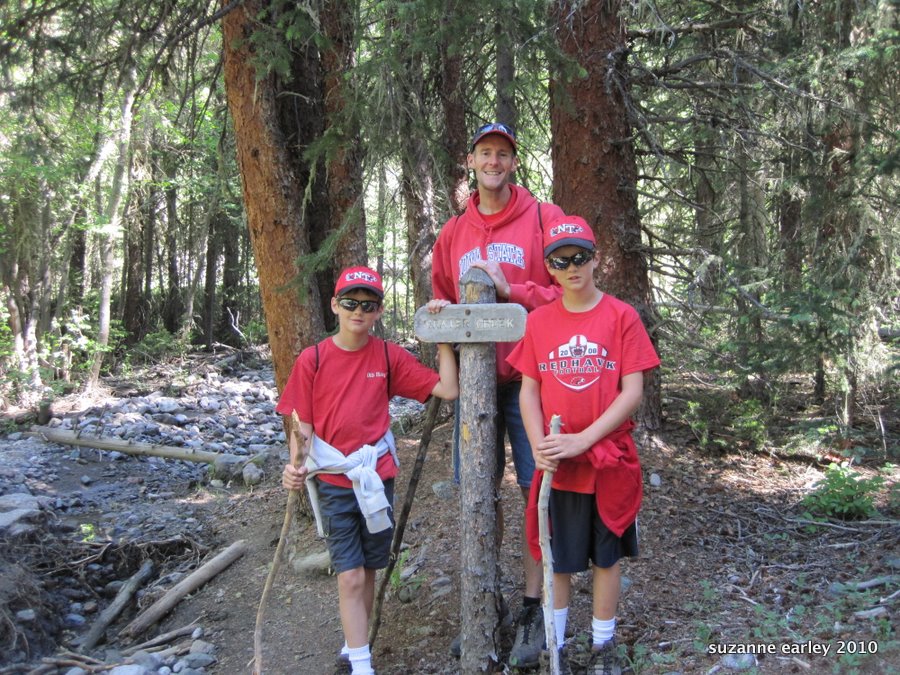 And no, I did not get the memo that day about wearing a red shirt.  It would have been nice if they’d said something, don’t you think?

We said good-bye to RMNP and headed south and west.  We had an absolutely gorgeous drive in I-70.  It follows the Colorado River quite a bit and the drive through Glenwood Canyon was particularly spectacular.  It was fascinating to see the landscape change — drier, and eventually MUCH emptier.  Nothing but dirt and scrub as far as the eye could see, with the mountains off in the distance. 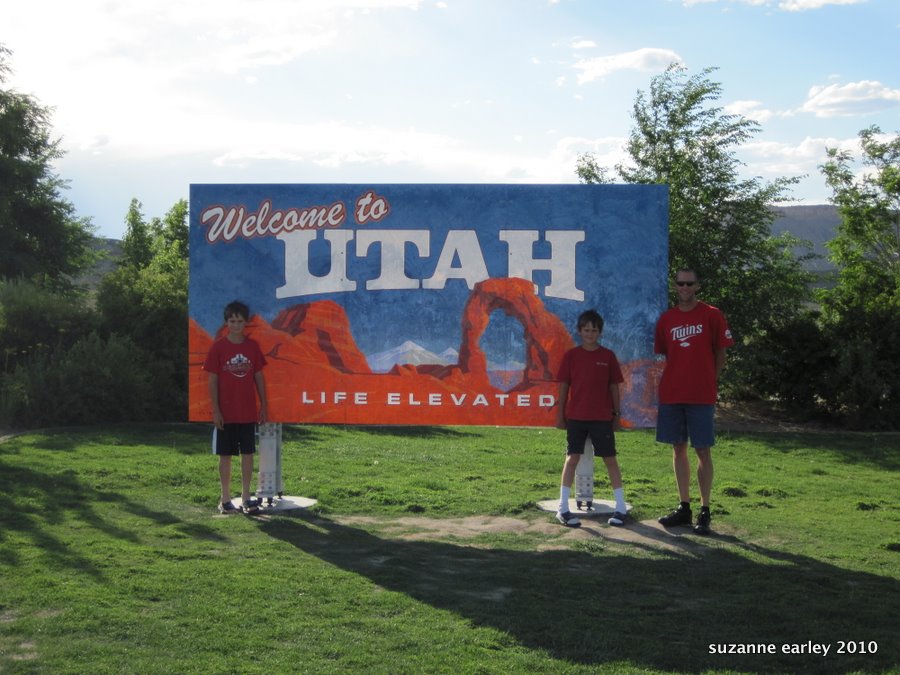 We made it into our 3rd state, the second “new” one for the boys.  This was taken at the rest stop, I also have a picture of the “official” sign on the highway.  We finally made it to Moab around 7, checked into our hotel, ate some supper (Pizza Hut, terrible service…) did some shopping and headed for bed — we had an early start the next morning.

The rest of the days photos are on Flickr.  Well, almost the rest.  I am vain enough to not share the ones that are supremely unflattering of me…and with that exception, it is all of them, the good, the bad, and the fuzzy.  We’d be driving and Mark would say “take a picture of that mountain for me” — so lots of through the windshield photos, with unfortunate reflections.  Still, some good stuff.  Thumbnails below: