Before I get to the main event, I have to show off how far I’d gotten on my travel knitting project: 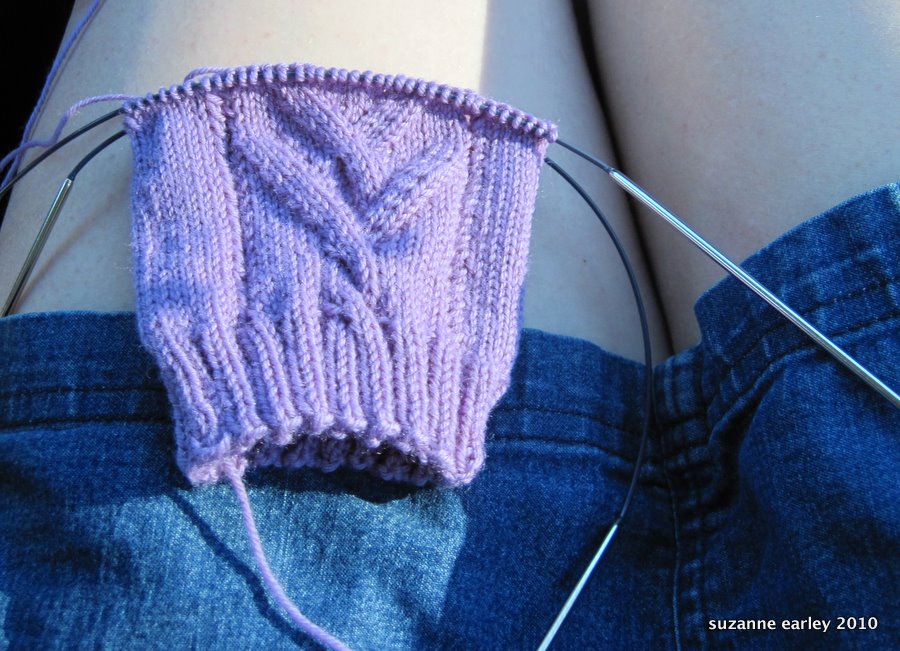 The pattern is Pink Ribbon Socks by Laura Spradlin.  (that’s a Ravelry link to my project).  My first cables.  I have really enjoyed making this pair of socks.  Pretty proud of myself!

OK, now to the actual vacation: 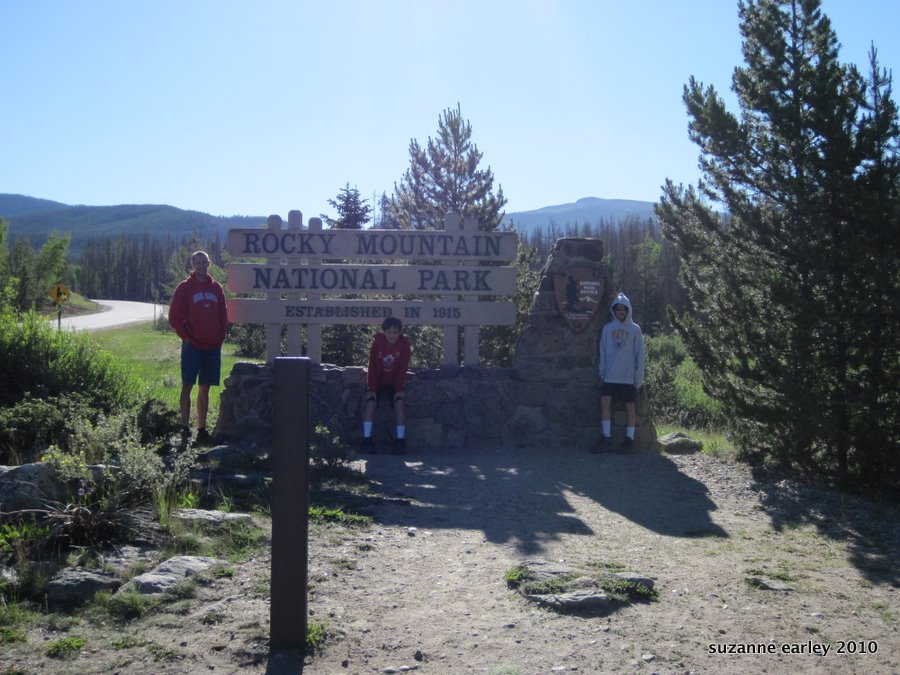 Actually, on the way TO, Rocky Mountain National Park, we enjoyed the drive from Loveland.  We got to go through Big Thompson Canyon, which Mark remembered from when he was a kid.  We were glad we had stayed in Loveland, and made this part of the drive in the morning, rather than at night, because we wouldn’t have appreciated it nearly as much.  Plus, the weather was nicer.

OK, the park.  We had beautiful weather for our first day at the park.  We stopped at the visitor’s center, and the Ranger pointed us in the direction of Bear Lake.  We started with a half mile hike around the lake itself.  Well, I walked half a mile. 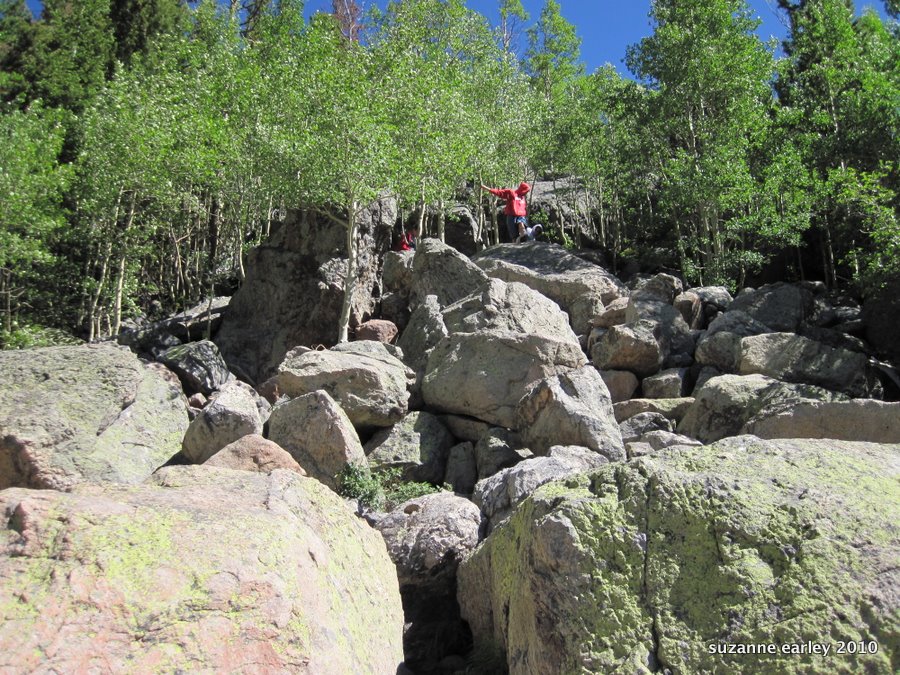 The boys were up and down rocks and side paths and probably went an extra half mile, at least. 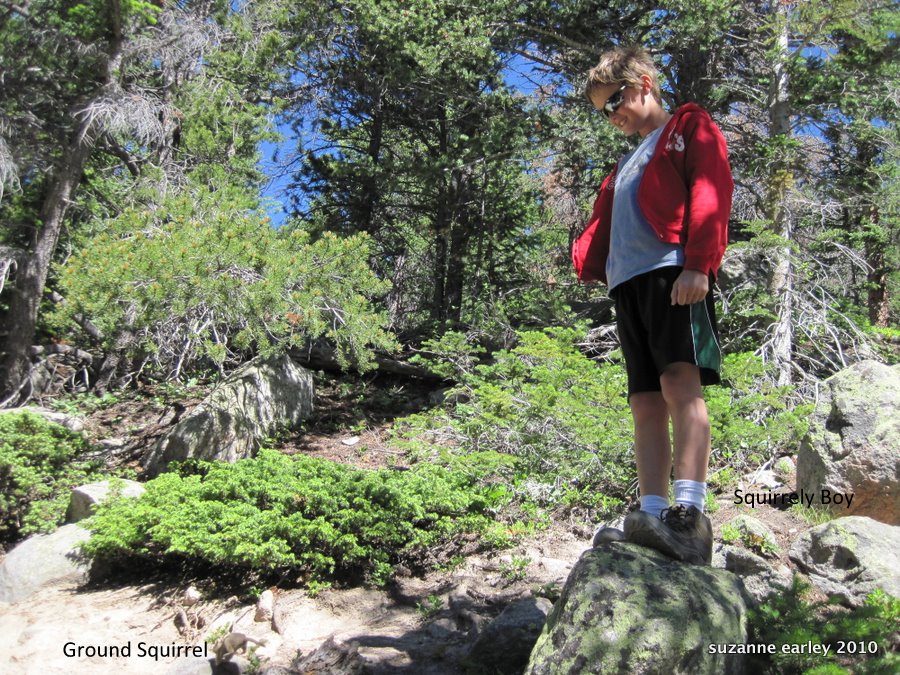 Next, we headed for a series of lakes:  Nymph Lake, Dream Lake and Emerald Lake.  It was quite a hike to get all the way to Emerald Lake.  Lots of really amazing views, interesting dead trees to hide behind, rocks to climb on, even some snow to throw at each other. 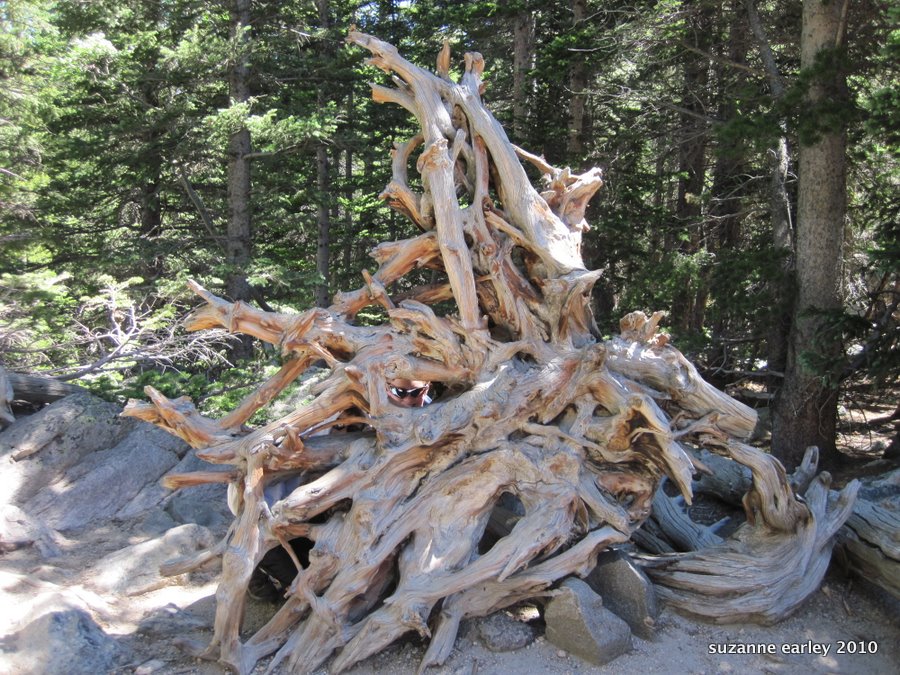 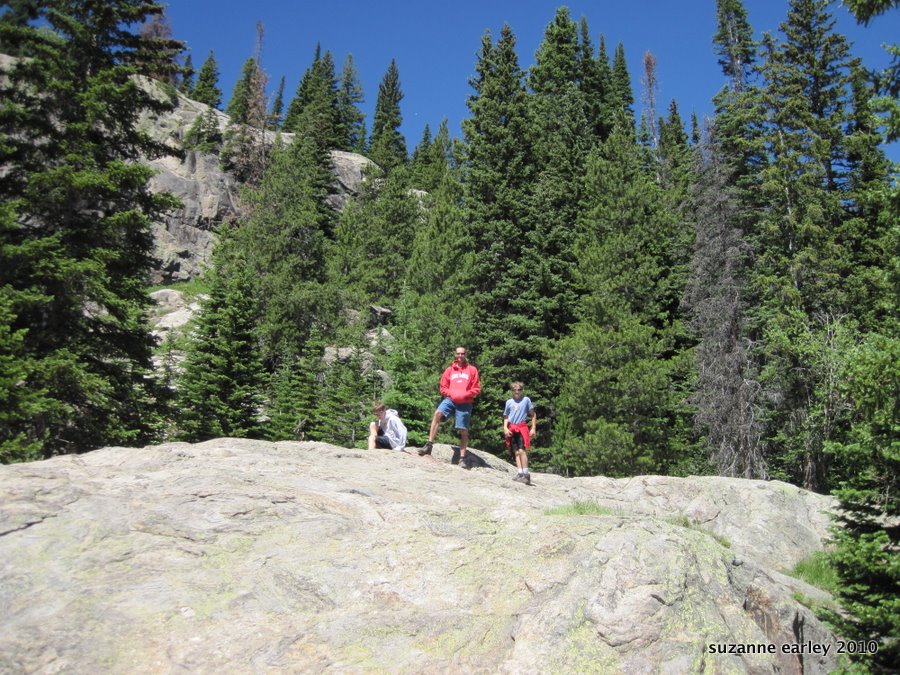 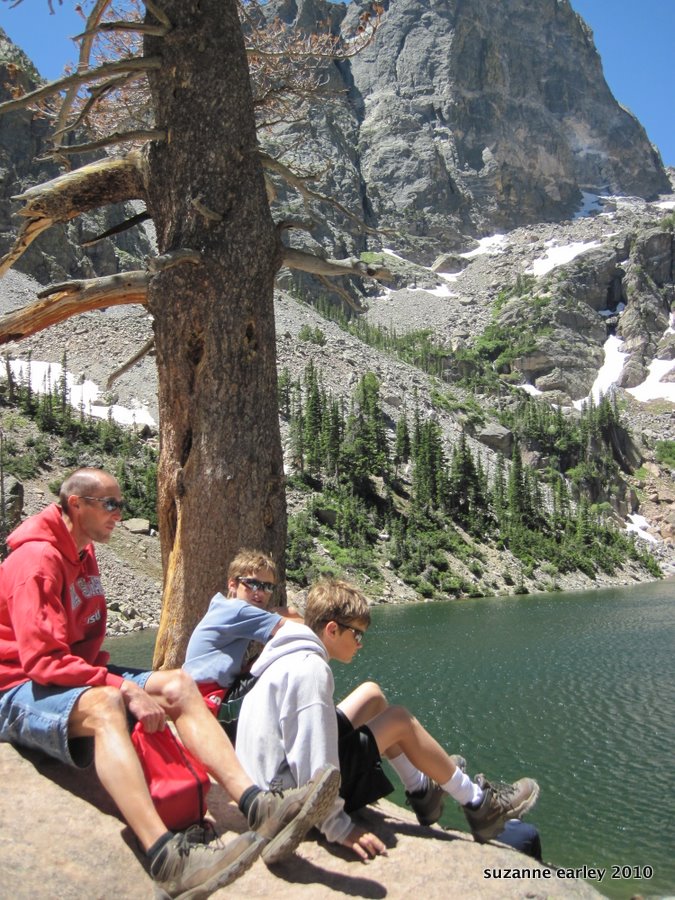 That last one was taken at Emerald Lake.  The elevation at Bear Lake, was 9475 ft, Emerald Lake was another 605ft up.  We were sure feeling the effects of the thin mountain air.  Round trip, the hike was 3.6 miles, and it took us longer than expected.  Everyone (read…Will and Joe…) got hungrier, too.  After our hike, we decided to go back to Estes Park for a late lunch.

Holy Hordes of People.  And cars.  Estes Park had been practically empty when we drove through at 8:30 in the morning!  We did end up finding food, and then we headed up Trail Ridge Rd.  We stopped several times for phoot ops and did some shopping at the Alpine Gift Shop. 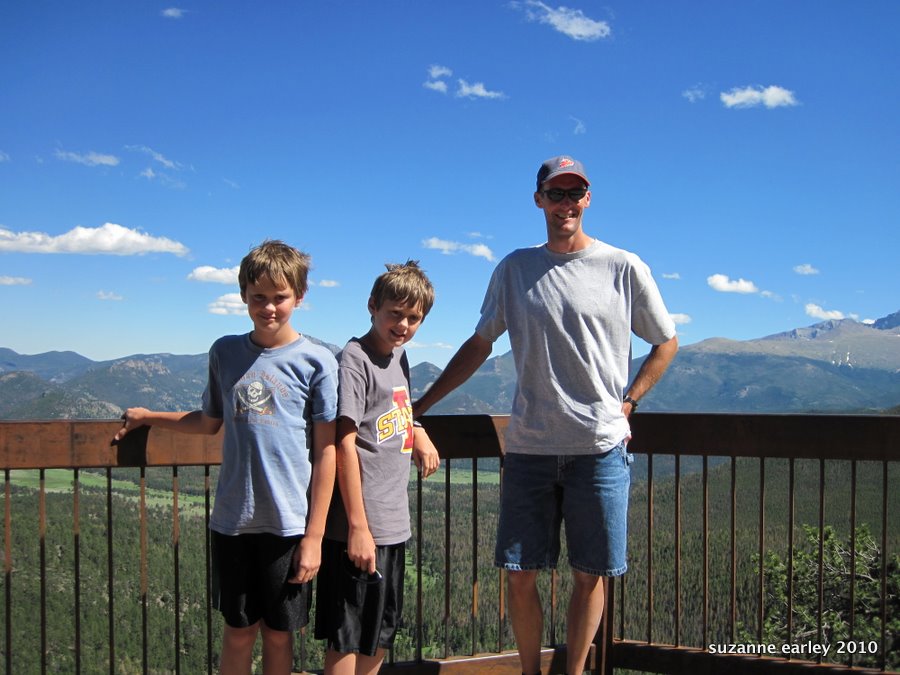 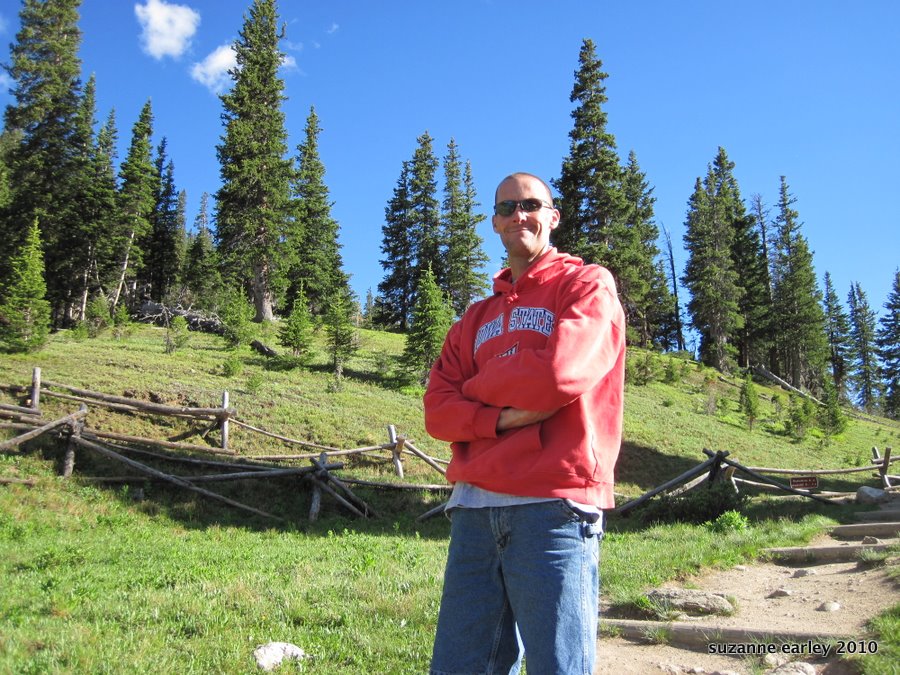 We took the obligatory Continental Divide photo, and then drove down through some hairpins that had me scared to death…and then off to Grand  Lake. 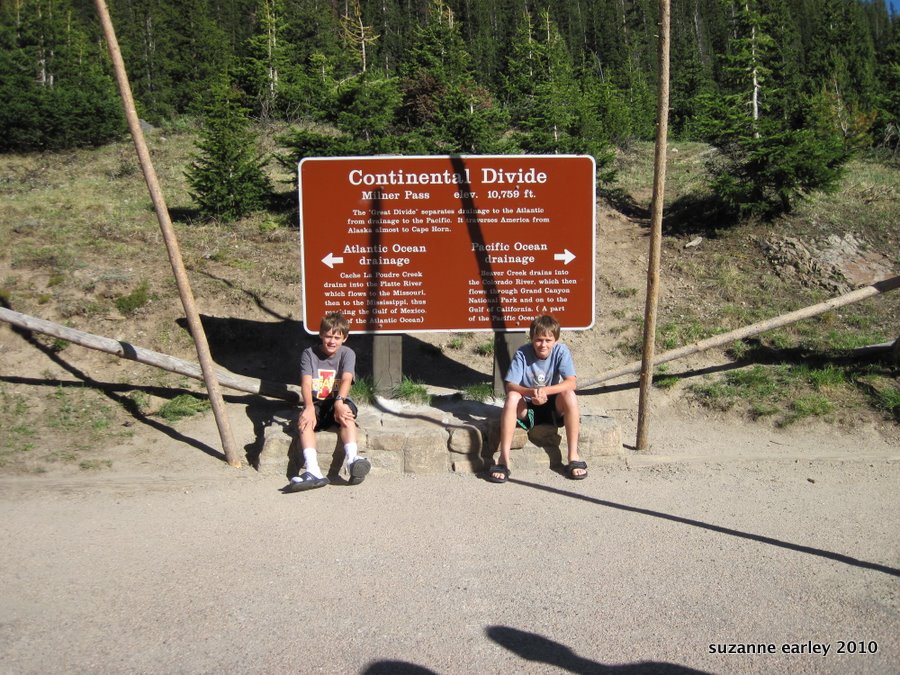 I had a hard time looking out the windows during a lot of the drive.  In many places there is NOTHING between you and a very long drop.

The Inn at Grand Lake was OK — nothing special.  Kind of loud, actually, and none of us slept particularly well.  We did check out the tourist shops in town, but I forgot to walk back far enough to check out the quilt shop.  Oops.  We ate a late supper at the Sagebrush BBQ place and the boys were introduced to throwing your peanut shells right on the floor.  Will didn’t eat any, but he was happy to help his Dad get them out of the shell so that he could toss shells.

I’ve just shared some of the photos that had my people in them, we also took lots of scenery pictures.  I’ve uploaded everything from July 5th to my Flickr Account, you can view the set below on my website or directly at Flickr.