What can I complain about today?

The snow?  The wind?  The lack of school?  The fact that I had to call city hall at 11 to see if someone was actually going to plow my road any time soon?

How about the new carpet we picked out on Saturday that we hoped would be in stock so that we could get it installed next week?

Yeah.  It’s delayed and won’t be SHIPPED until February 26th.

So, I’ll have to take a paint sample down to Staker’s tomorrow to try to find a DIFFERENT carpet that I like just as well.  That’s hopefully not more expensive…

How about Mediacom, who SAID we could have cable Internet (12Mpbs, baby!), only the technician came out and said…Not So Much.  He had no idea why they sent him out as there isn’t a cable node anywhere near my house.  That was Friday.

I’ve gotten calls two days in a row from guys wanting to reschedule my cable install.

Huh?  I mean, it’s great that you are all proactive and stuff, but…why are you calling me?  Why are you taunting me with something I can’t actually have???

Wait.  Maybe I won’t complain at all.  Maybe I’ll just show you a sneak at the knitting pattern I started today — because it makes me smile and makes the rest of the crap not bother me quite so much. 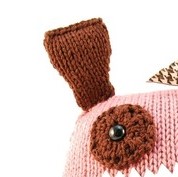 And yes, I don’t really need a new knitting project, but it was a snow day, right?