You know, as much as I like to whine about snow, I have to admit that I’m a little bit grateful that I live here in Iowa, where at least we expect snow, and we have the infrastructure to deal with snow.   Those of you that live in places that aren’t used to snow, but are now covered in it have my deepest sympathies.  I hope it goes away quickly for you.

The boys were scheduled to go to the dentist this afternoon, but the current snowstorm we are experiencing has convinced me that staying put is a wise choice.  Of course, it’ll be more than a month before they can get a  rescheduled appointment, but maybe by March 18th it won’t snow.

When I showed off my cupcake, I mentioned that I had gone looking for something else to make.

I ended up deciding to do an ice cream cone: 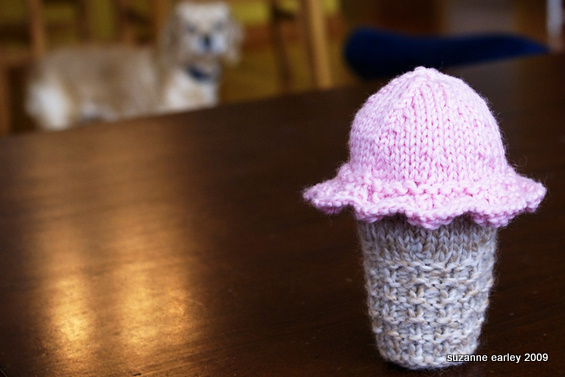 Pattern from I Like Lemons, yarn is some more Cascade 220 (same as the icing on the cupcake) and the cone is Dive Autunno. There is much improvement from the cupcake, primarily because it occurred to me that I prefer doing socks on 2 circulars (vs. DPNs), so…there wasn’t any reason I couldn’t do these crazy projects on 2 circs.

Still, there are issues. I was working on the ruffly part of the ice cream scoop during the end of the Super Bowl last night. I thought I was concentrating, but…I managed to mess up the counting a bit. You can’t tell…and heck, it’s a knitted ice cream cone, it’s not like perfection is required here.

Feather Boot Camp kicked off today, so I actually spent a lot of the weekend getting ready for that, and today is technically my day off, (well, off from the shop).  I have plenty to keep me busy for several lifetimes, so I probably shouldn’t really be making knitted ice cream cones, but dang, it’s so cute.