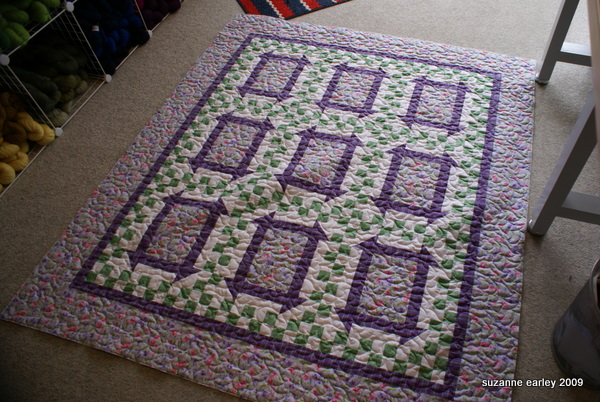 I meant to bring this quilt home so I could get a better picture of it, but I forgot.  I’m just glad I remembered to get the memory card out of the printer so that I had the pictures I had already taken…

I started making these blocks some months ago, but they got set aside in the heat of…several other quilts.  After getting Sweet to it’s current state, I looked around at the disaster that masquerades as my sewing room and decided that I ought to take the opportunity to clean up a bit.

Then, I came to my senses and pulled these blocks out in order to get this quilt finished.  Only, this isn’t exactly the quilt I had in mind when I was making these blocks.  I had originally intended a twin size quilt, with 16 blocks, but I had an epiphany over the weekend:  I could use 9 of them to make this quilt, and turn it into a year-belated baby gift for Mark’s cousin’s baby…and then I could make a smaller block wallhanging as a sample for the shop.

It was while I was sewing on the borders to this one, that I realized that 16-9=7, not 5.  I was thinking I would only end up with 1 orphan block, but this plan would result in 3 orphans.  7 is practically 9, so…I guess I’ll be  making 2 more blocks, plus the required checkerboard sashing…and end up with a 2nd quilt this size.

I was so productive today:  got the whole quilt quilted, plus a bunch of other stuff done.  Of course, that’s only because I let IQ do the quilting…this is a panto from Keryn Emmerson called Bramble, it came on the IQ.  I thought it was quite pretty.  I used wool batting, and a lavender thread on the quilt top.  Hopefully I’ll have it labeled and bound sooner than the kid’s 2nd birthday… 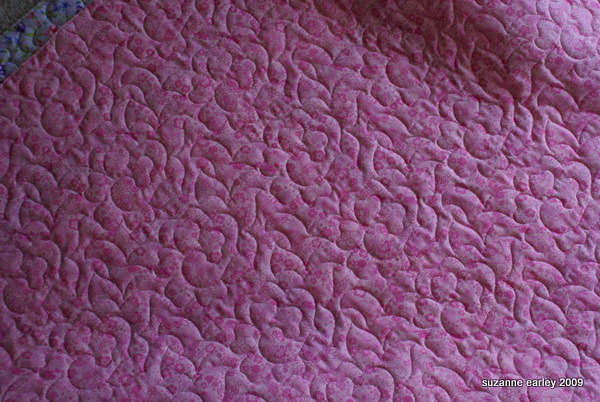 I’m not sure how it’s possible, but:  tomorrow is the last day of school.   I’m going to have FIFTH graders.  I’m pretty sure I haven’t given them permission to grow up so quickly.