As previously mentioned, today was the last day of school.  As you might expect, the boys are thrilled to e out of school for the summer, and are already looking forward to next year: 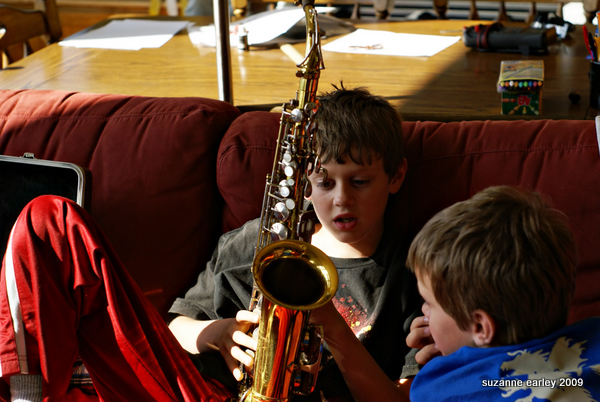 Our school starts band instrument instruction in the 5th grade, guess what Will is playing next year?  One of Mark’s coworkers had this (and a clarinet for Joe) hanging around that he was willing to part with for cheap.  Both need a trip to the instrument-doctor, the sax needs more work (repadded, a dent, something else…), but their soon-to-be band teacher looked at the instruments and thought they looked like decent instruments that would work well for them to get started on.  The best part is they won’t break the bank.

I’m moving along quite nicely on a sock: 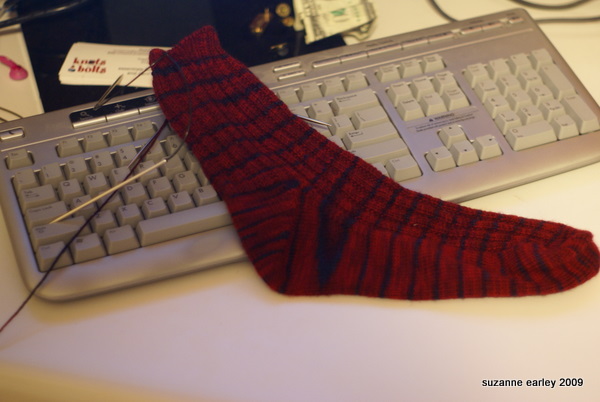 What?  You didn’t know I was making this sock?  Yeah, well, I haven’t been posting much lately, have I?  I actually started this way back before I went to New Hampshire, but then I got stuck on the heel.  It’s a toe-up sock (which I love, I actually ripped out the blue socks I was making and will start over on those, toe-up….but after the red pair is done…maybe…I’m so fickle…).  Turns out that I was making the heel much harder than it needed to be.  The fact that I tried to do it late at night in a hotel room when I was overly tired might have something to do with the problems I was having…

Speaking of making sock heels, I finally put on my big girl panties and tried working on a heel on the circular sock machine.  I ran out of time (I had to get home), but I’m part way through, and while I have a long way to go before I actually make a sock on that crazy machine, I’m “getting it” and I may even have something to show soon.  Or not.

I’ve only got about an inch of the cuff left of that sock, I’m debating about staying up and finishing it…