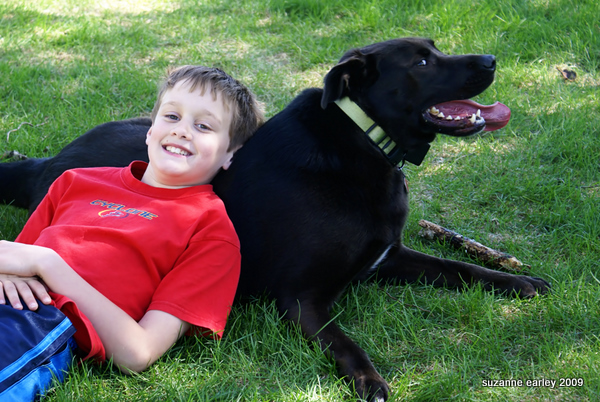 Last weekend, Mark got to babysit Wrigley, his sister’s dog.  Does that make him our nephew?

Wrigley got to come over to our yard for several hours and the boys had a blast playing with him.  They were really thrilled that he let them lay down on top of them, and I think that I heard that it was even funnier when he was laying on top of them.  (Katie pretty much ignores the boys and wants nothing to do with them.  Unless one of them is are sitting on the couch, and then she’ll decide that he is her new best friend and jump up to sit on the couch with them…)

Will took this picture.  I have a whole bunch of pictures that the 2 boys took of Wrigley.  Unfortunately, many of them are of Wrigley’s backside, as we was walking away from the camera.

And we won’t even talk about the series of photos in which the poor dog’s privacy was invaded while he was, um, answering the call of nature…

Mark’s been keeping his eye on the swap sheet, looking for just the right dog that needs a good new home.  I’ve given the 3 boys my blessing, but I’m trying to stay out of it.  I’ve told them to go ahead, but they shouldn’t

expect me to fall in love with a new dog.

Yeah, I don’t believe me, either.