You are here: Home / Blog / Other / Not a morning person 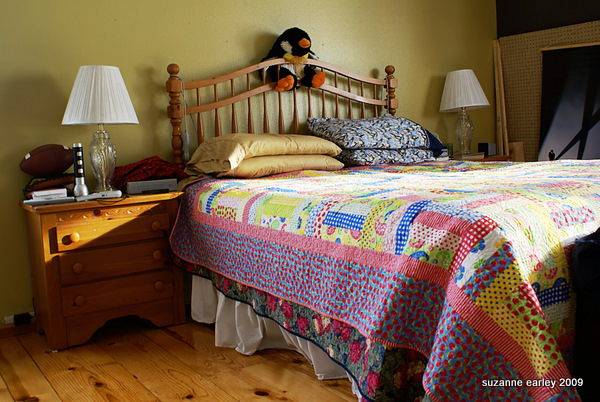 I’m not really a night person, either, but here I am at midnight, still up.  Gee, wonder if that’s part of why getting up in the morning is so hard?

I realized that isn’t morning specifically that I have a problem with, it’s having to be up at a specific time that gets me.  If I don’t HAVE to get up at 7, it doesn’t bother me as much to GET up at 7, if that’s my choice.

A week or so ago, the boys were setting their alarm, and got up on their own for several days in a row.  It was lovely.  Their motivation was having game time before school — which meant they didn’t need me to hurry them along, they were choosing to get ready in a hurry to have more time playing. And so, I snoozed until an obscene time, but still got up in plenty of time to drive them to school in my pajamas.

I’m not sure why they didn’t continue the alarm thing.  I’ll have to suggest it again

For THEIR sake, of course.  No ulterior motives here,  no way.

(picture is my January 9th daily photo.  doesn’t that bed look inviting?  wouldn’t you want to stay in it as long as you could in the morning?  gee maybe i should go get IN it right now!)