On the way home from MQX, I had a brainstorm for a decidedly nontraditional wholecloth quilt.  I started doing some scribbling in my sketchbook, and got to work yesterday.

As these things often go, the resulting quilt is going to look nothing like my original brainstorm.

The original idea was going to use a piece of fabric that shades from dark pink to light pink across the width of the fabric.  (Or maybe it was going to be the piece of lime green fabric that does the same thing….).

But then I had a better idea.  Well, not necessarily better, just different.  I may go back to the ombre fabric, but this project went a different direction.

I wanted to experiment with texture, so I thought about using a piece of red wool that I had purchased to make a jacket.

I’m going to show you the scribblings from my sketchbook — you should be able to click on them to view them larger and try to decipher my messy handwriting.  The first shows the original ideas.  You can see that I was playing with the shape of the quilt itself, as well as how the plumes were going to flow from top to bottom. 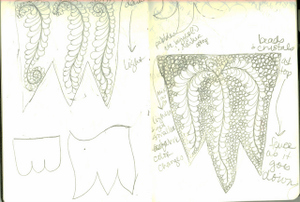 It’s hard to see, but the plumes on the right extend from a heart in the center.  In the next sketch you can see where I decided to experiment more with the heart shape. The real Ah-Ha! moment is a tiny sketch on the right — the asymmetry really tripped my trigger, especially because I was concerned about how to get the heart perfectly symmetrical in the size that I wanted it to be.

I pinned my wool up on my design wall, got out my white chalk, and started to work.  I marked off a square about 57 by 57 (the wool is 57 inches wide).  And then I drew a large asymmetrical heart.  I think I only redrew a small part of the bottom left plume.

I loaded up the wool and started quilting.  This is what I came up with during the afternoon on Monday. I took it off the frame so that I could look at it and see where I wanted to go next.  This part went quite quickly. You can see the white chalk marks.  The swirl in the lower left hand corner was an experiment in trying to fill the space.  I didn’t get the marks wiped off before taking the picture.

I had already pretty well decided that I wanted to fill the rest of it with “pebbles” or “bubbles.”  I’m contemplating beads and/or crystals, but don’t know exactly what that will look like.

Here’s what it looked like by the end of last night.  I took it outside for some photos, because the lighting inside wasn’t cutting it. 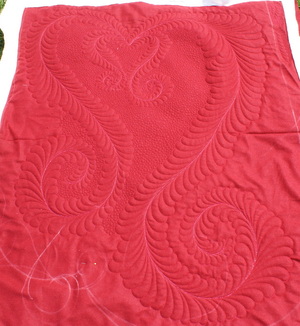 Not the greatest pictures, but when it’s done I’ll do a better job of photographing it.  What you can’t see in this picture is that I couched some thick metallic red thread (not sure what it is?  maybe razzle dazzle?  Vicki W sent it to me) along the spine.  The couching was done on the longarm.  Also, you can’t see that the feathers are done with a Superior Highlights variegated thread (reds), and the pebbles are done with a dark red Superior Bottom Line.  Again, ignore the stray chalk marks.  After getting the heart done, I redid the outer dimensions, it is going to be a rectangle about 45 by 55 or so.

It has a very interesting texture.  I love the way it is turning out.  Even my DH was impressed last night.  Mostly by the pebbles, I think.  It’s only made of 2 layers of the red wool and a layer of Hobbs 80/20 batting, but the feathers are going to have great dimension.  I don’t like cutaway trapunto, and I hate using 2 layers of batting.  The wool is so thick that it is puffing up nicely.

I need to think of a name for it.  Any ideas out there?

Well, my break time is up, I must get back to my books and make another run to the Post Office.