You are here: Home / Blog / Uncategorized / What Remains 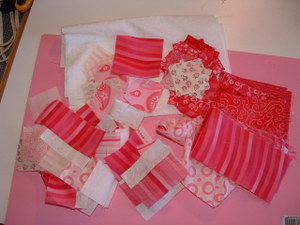 Yesterday I showed you a picture of the fabric I bought last week.  Vicki says that I’ve violated quilting rules by not allowing the fabric to properly age in my stash before using it.  She’s probably right — but — I just had to make this quilt.  I had to.  Honest.  I would be a raving lunatic if I hadn’t gotten this one out of my system.  I just had to know what it was going to look like in fabric.   Picturing it in my head or playing with in Electric Quilt was just not enough.

The amazing thing is that what you see above is all that is left of the fabric I used for the top.  The white fabric was in my stash.  I used a few strips of light pinks from my stash as well.  The dark pink stripe was the largest cut of fabric I had purchased — all that’s left are some scraps and the one strip (about 3 inches wide) that you see on the lower left of the picture, the other dark pinks were fat 8ths and I didn’t use very much of those.  I  went in to the fabric store with a plan of sorts, but didn’t have exact amounts — and when I got to the cutting table, instead of asking for a yard of each (like I might have in the past), I made myself stick to 1/3 yard cuts of the light pinks.

The top is all put together.  I think it measures somewhere around 63 by 63.  I’m not going to show it to you the whole thing, yet, though.  I will let you see one of the blocks. My inspiration was a quilt designed by Judy Laquidara called Gratitude. Did you notice that it is a Churn Dash variation?  Have I mentioned that Churn Dash is one of my very favorite blocks?