I’m not entirely sure what happened to August and September, but a great big monster called “School” swallowed most of those two months up whole.

Photographically, there wasn’t much going on that could compare with having been in the Grand Canyon, so it became very hard for me to want to take a picture of ANYTHING. Also, school happened.

The start of school has been very busy this year, and I think maybe I’m finally coming up for air, although I won’t say that too loud because some new debacle will hear me and decide to descend upon us. Debacle is our new principal’s favorite word for whatever craziness is occurring, and believe me, we’ve had an awful lot of crazy.

The thing about school is that I can’t really talk about a lot of it, so I wind up saying nothing on the blog and Facebook, because there isn’t much else to say.

I have pulled out the sewing machine, though, and have made myself a dress. Actually, this is the second dress. THe first dress was a disaster, but I learned a lot from it. 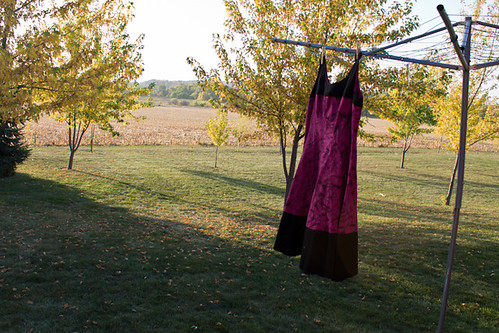 It’s not finished: the lining in the bodice needs to be hand-stitched down, and I still need to hem it. Actually, I’m thinking that the entire thing needs a lining, and if I do that, I will probably take out the lining that I put in the bodice and redo it.

I know. It’s hard to believe that I would even make a dress to begin with, let alone talk about RE-doing a lining. Most of you probably won’t even believe that I put the zipper in by HAND. It’s true, though. Hand-stitched the zipper.

Actually hand-basted quite a bit of the dress, which I think made a big difference.

But that’s all a story for another day.

Today, I will leave you with Miles, exploring the outdoors. 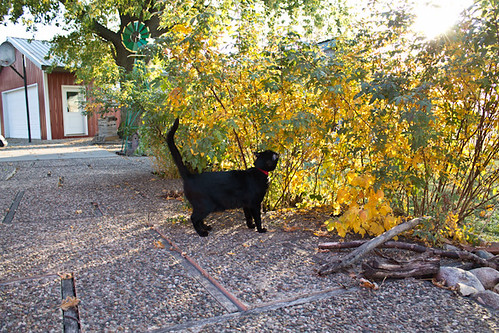 He’s trying to eat the leaves off the rose bush. After this, he walked over to the driveway and starting rolling around in the dirt.

After that, he had to go back inside, whereupon he spent the better part of two hours howling, scratching the storm door, and jumping up at the door handle, trying to get back outside.