I know, finally, right? I was on a roll last night, and thought I’d go ahead and tackle another day of our trip tonight — and we’ve finally reached the Grand Canyon.

Our trip was a guided tour by Western River Expeditions. This company is HIGHLY recommended. They were fantastic, from the initial booking, through prep, straight on through to the entire trip down the river. I can’t say enough good things about them.

Day one of our river adventure started when I woke at 5AM, more than a little nervous. The boys managed to eat pop-tarts, but I couldn’t eat a bite of anything.

We checked out and met up with our group in time for the first plane from Las Vegas to arrive. Then we got to hurry up and wait for a really long time for the second plane. Some of our group met up in Vegas, while the rest of us had driven in to Marble Canyon.

Finally, everyone had arrived, we piled in vans and headed for Lees Ferry, where I discovered that the spare camera battery was still plugged in to the wall in the hotel room. Thankfully, the van driver was super awesome and made the drive back to get it for me.

Once we were at Lees Ferry it was controlled chaos. There were two Western River Adventure trips leaving that morning (as well as trips guided by several other companies). 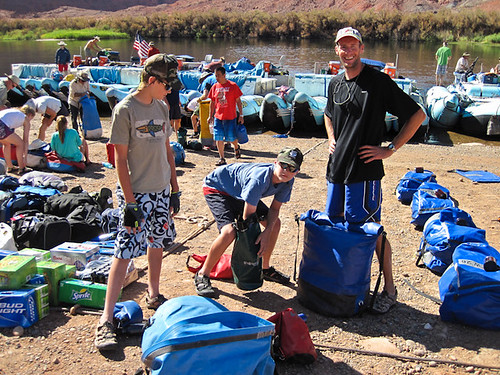 At the river, everyone had to grab a big dry bag: Mark is kneeling on his, squishing the air out: it contained your small day bag (what Joe has his arm in, there in the center), a sleeping bag, sheet, and tarp, as well as a mug that was yours for coffee and water throughout the day. Your 20lb duffel went in the day bag with the sleeping gear, and then you rolled it up, squished the air out, and clipped it closed.

Those bags all got piled up in the middle of the boat, and covered with a tarp, and were inaccessible during the day. Everything you thought you needed, like your camera, or sunscreen, or whatever, went in your day bag. 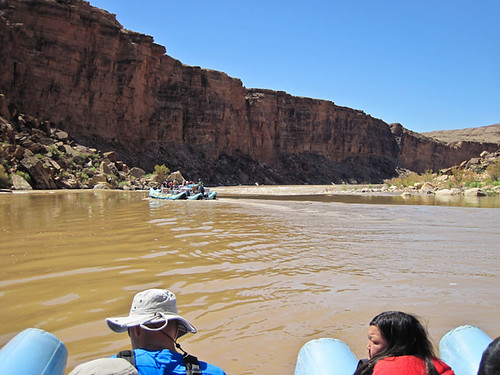 Our trip included two boats, we floated down the river together, always within sight, but not usually in shouting distance. There were 28 guests and 4 guides spread across the two boats.

It took awhile to get loaded up, but finally we were underway, and everyone gave a great big cheer as we crossed under the rope that marked Mile 0. Distances on the trip are marked by their distance from this rope that was hanging across the river at Lees Ferry. No pictures, sorry…. 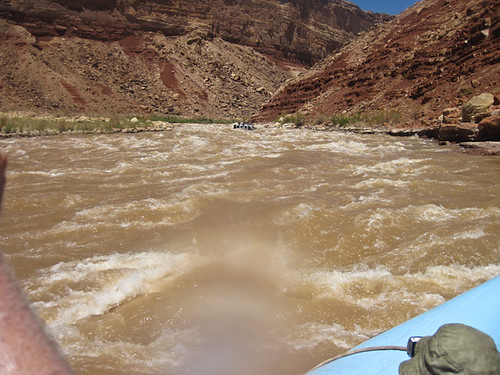 (At some point my camera lens got a streak of…something…on it. I think I fixed it later in the day.)

We ran a few rapids, mostly smaller ones, but a few BIG ones. Some of the names that I wrote in my notes are Soap Creek and Roaring 20s. Those must have made an impression that day. The water was SOOOO C.O.L.D. The air temperature was near 100 (Fahrenheit) most of the time, but the water was only about 50 degrees. That is shockingly cold, no matter the air temperature. We were in the shade enough, that some of us were actually kind of cold that first day. 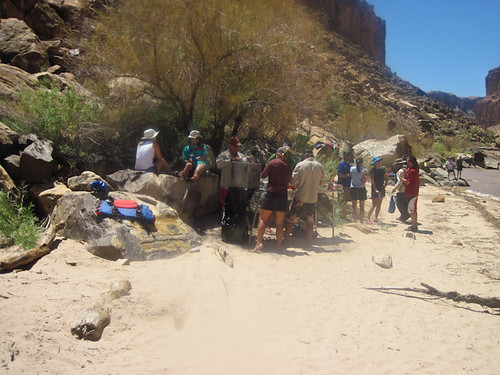 We stopped for lunch at a beautiful beach. The crew made chicken salad (cooked chicken, tomatoes, nuts (pecans?), low-fat plain yogurt, onions and curry powder) that we ate in wraps. There were cookies and chips, and the kids (and adults!) learned really quick to eat as many cookies as they wanted, because anything leftover had to go in the trash. 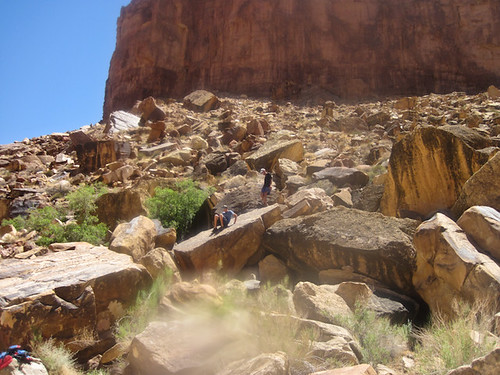 Mark and Joe did some climbing while they waited for lunch.

We all tried to keep sunscreen on during the day, but we kept getting wet, so I did burn the tops of my legs. It was really important to stay hydrated, so we were encouraged to drink a LOT. They had unlimited ice water and lemonade, and some people did bring beer and pop, but they still had to drink lots of water, too.

You are probably wondering: but Suzanne, if you are drinking a lot, doesn’t that mean, you have to GO a lot? And yes, you are right. You do, but I’ll address the whole bathroom issue in a different post… 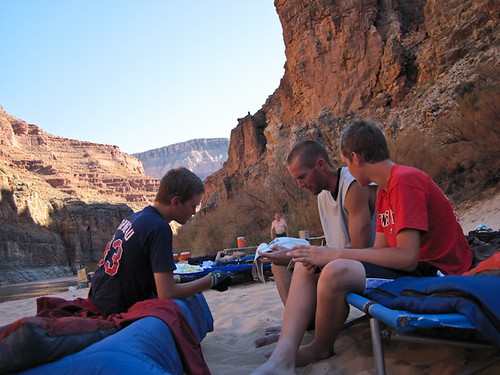 We stopped for the night at about 4:30. We made it to Mile 30.5 the first day, our camp was called Fence Fault. Lots of the places in the Canyon have funny or interesting names. There were LOTS of stories told throughout the trip. Every night we consulted our river guide to see where we’d been and where we were going. 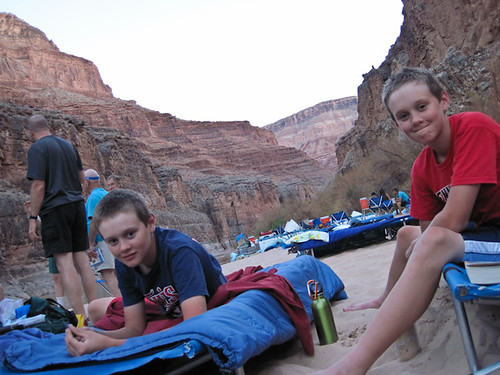 Camp was just a beach, we all just kind of spread out along it. Everyone got a cot and their sleeping bag. There were tents, but you didn’t really want to sleep inside them — it was another 20 degrees hotter inside…there was one couple that set up a tent every night, even though they didn’t sleep in it, they used it to change, and store their stuff. 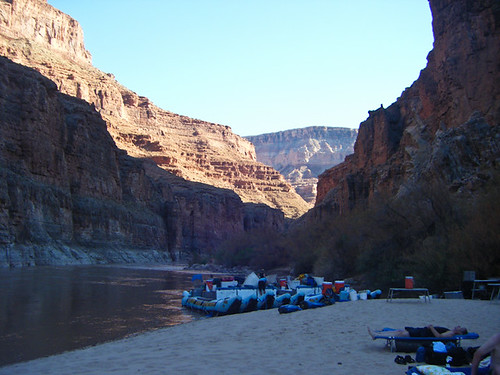 The crew slept on the boats, the idea being that if they came loose, they’d wake up in time to deal with the situation before going over the next rapid…

Just to the very center right, you can see some metal tables — those were the “kitchen” — for supper the first night we had Spaghetti (try eating that on a plate in your lap….), salad with strawberries, blue cheese and walnuts with a raspberry vinaigrette, and garlic bread. There was Sara Lee cheesecake for dessert.

Many of us did take “baths” in the river, which is just as cold and awful as you can imagine. Everyone did brush their teeth, you took a water bottle or mug of drinking water with you, dipped your toothpaste filled brush in it, brushed, and then walked to the edge of the beach and spit in the river. Rinse the toothbrush in the clean water, take a swig to rinse, spit again, and done!

It was a pretty exhausting day, and when it gets dark, you are pretty much done for the night.

And that’s about it for my report on the first day of our trip. I promise not to leave you hanging for too long before I post more…