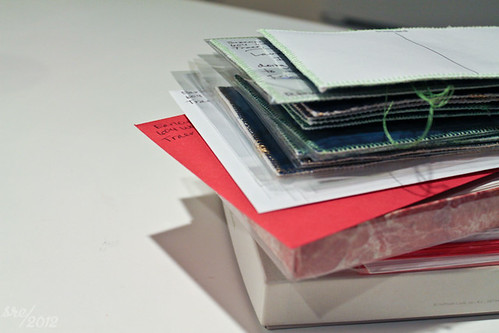 Today is day 1 of the Month of Letters challenge. I have stacked my deck — I have a bunch of  partially made fabric postcards that I worked on finishing over the weekend, I bought a few cards, and I gathered up some stationery. I have a list and I bought stamps — so I’m all set to write postcards and letters and mail something every day this month.

I have 2 postcards and some other letters going overseas, so it seemed easy and logical to start with those at the beginning of the month, seeing as how they have the farthest to go.

I’m not going to show my postcards until later, though, as I’d like them to be a little bit of a surprise for the recipients. They aren’t spectacular, but they are kind of fun, and hopefully they will bring a bit of brightness to their stacks of mail.

Has anyone else decided to try the challenge out themselves? Anyone else interested in getting a bit of mail from me this month? Post a comment or send me an e-mail! To be clear: I am not asking you to send me anything in return. I mean, it would be nice of you, but it is not “required,” just in case you are hesitating because you think I expect you to be signing up to “swap” with me.