You are here: Home / Blog / Other / Making those hats

Google is my friend, and he helped me find inspiration online for my hats, and my primary source was Martha Stewart, but I made a few changes, and thought I would document them in here, just in case anyone else was looking for an easy fleece hat project and liked the look of mine.

My rectangles were cut at 23 by 13.  That seemed to fit my team of 11/12 year olds, plus the adults pretty well.  It was  little bit on some of them, and a little snug on others, so you’ll want to customize the width as appropriate.

(The width is the longer number.  Measure the circumference of your head, and add about an half an inch for seam allowance.  My head is 23, and the hats are a tiny bit snug for me, but the fleece is stretchy, and you want it to fit snugly for warmth!!  And so it doesn’t fall down in your eyes…) 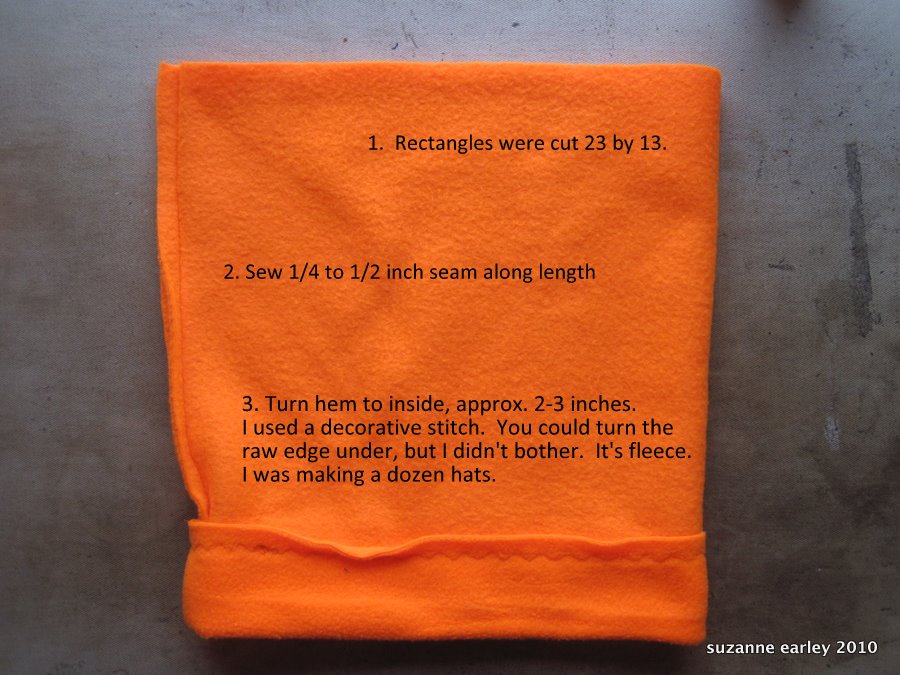 After sewing a tube, down the length, turn the bottom hem to the inside and sew.  I recommend using a walking foot if you have one, for the entire project, but especially for the last step, when there are a lot of layers. 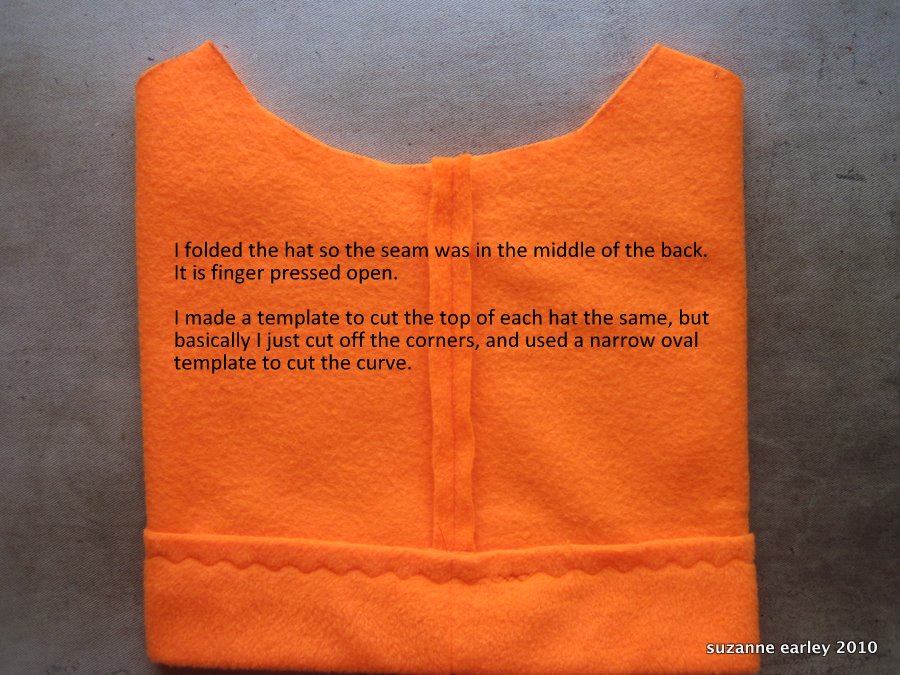 Cut the shape of the top of the hat.  I made two points at the “corners,”  you could make it a crown, with three points, or you could sew it straight across without the curve.  Or whatever you wanted! 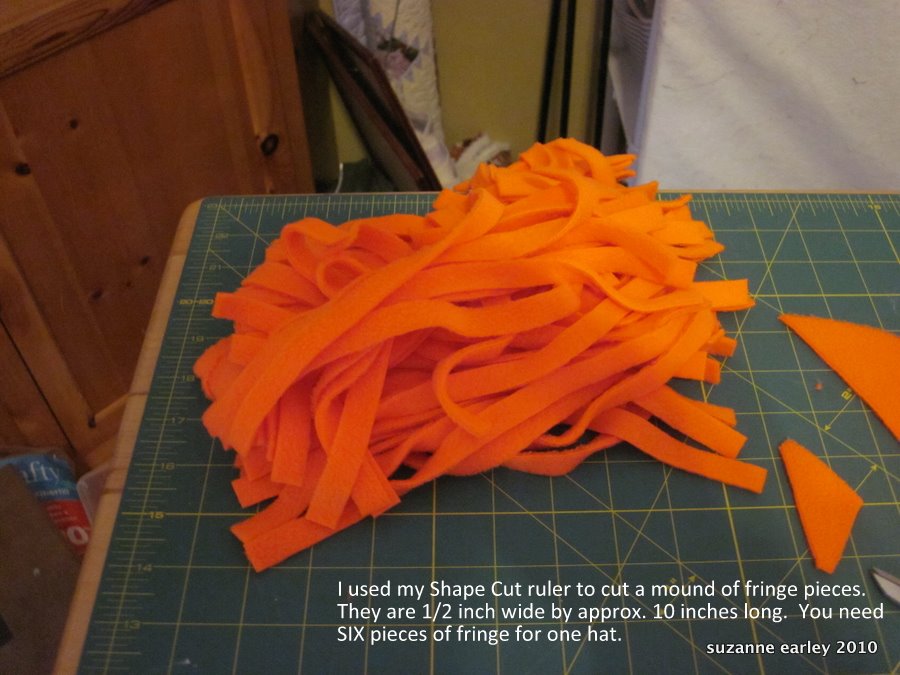 I needed a lot of fringe (have I mentioned that I was making TWELVE hats?).  You only need 6 pieces for one hat.  You’ll fold them in half so that each corner gets 3 folded pieces.  Any more than that, and you won’t be able to sew through it.  Yes, I tried more.  It didn’t work. 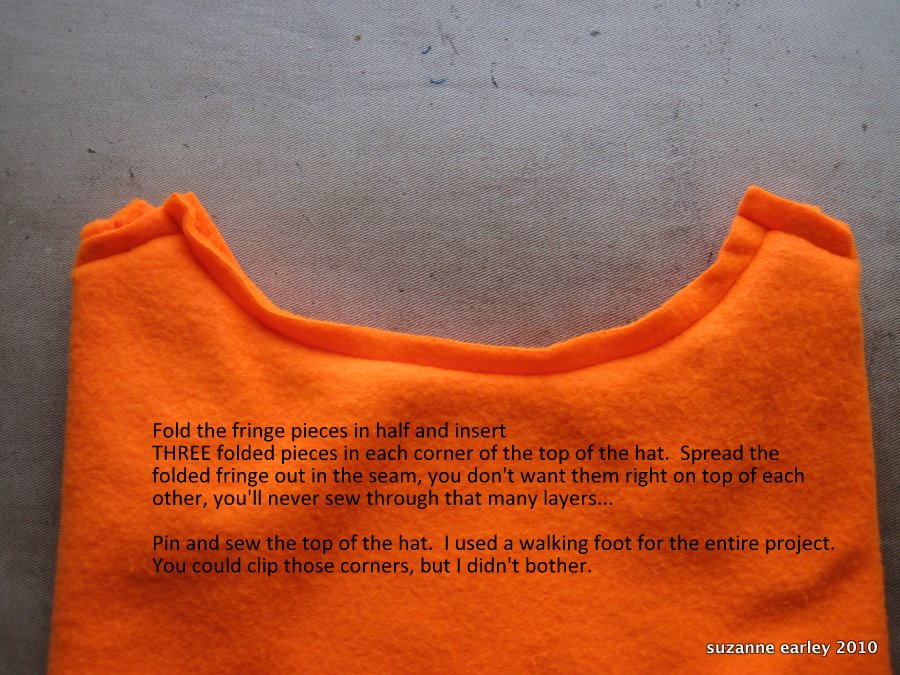 I forgot to take a picture of this step when it was just pinned.  I’m not sure how I would have taken a picture that really showed what was going on, especially in those corners, where the fringe is inserted.  Remember, it’s the folds that are inserted into the seam, so that when you turn the hat inside out, you get:

And I definitely recommend that Static Guard.  I was worried about the static while I was working on my computerized sewing machine, and as an added bonus, the hats don’t inject your head with high voltage static electricity when you wear it.  You know what I’m talking about:  the “I stuck my finger in a light socket” hairstyle you get when you pull off the hat…

The boys don’t it, but Mark is going to make them wear these when they go skiing, so he can easily spot them on the hill…