24 Days until I Race for the Cure. (I still have a long way to go on my fundraising goal, if you can help, here’s my personal fundraising page. If you CAN help, I’ll be eternally grateful).

Today’s run/walk: 2.44 miles total, 1.04 running. I had Mark get my bike down — I was afraid I’d hurt myself, if I tried to pull it down. Plus, the tires needed air, and as it turned out, the seat needed to be raised — he had lowered it to let the boys ride on it one time. I didn’t actually decide to ride it today, I find I have to work into the idea of trying something new. Not that the bike is new. Good grief, that thing is…older than the boys, certainly. Actually, I can remember buying it at the Target in Cedar Rapids, so it must have been shortly after we got married — which makes the bike 14-ish. I never did ever ride it very often, gee, I wonder if that’s because I was out of shape back then, too? Or that I get excited about something, only to abandon it shortly thereafter? At any rate, it’s waiting for me to hop on it when I’m ready for it, as a cross-training option.

And…now I’m going to include a really cute picture of one of the boys right after he had gotten his first haircut, in order to distract you from the fact that I don’t have anything else. Wasn’t he cute? Doesn’t Mark look young? 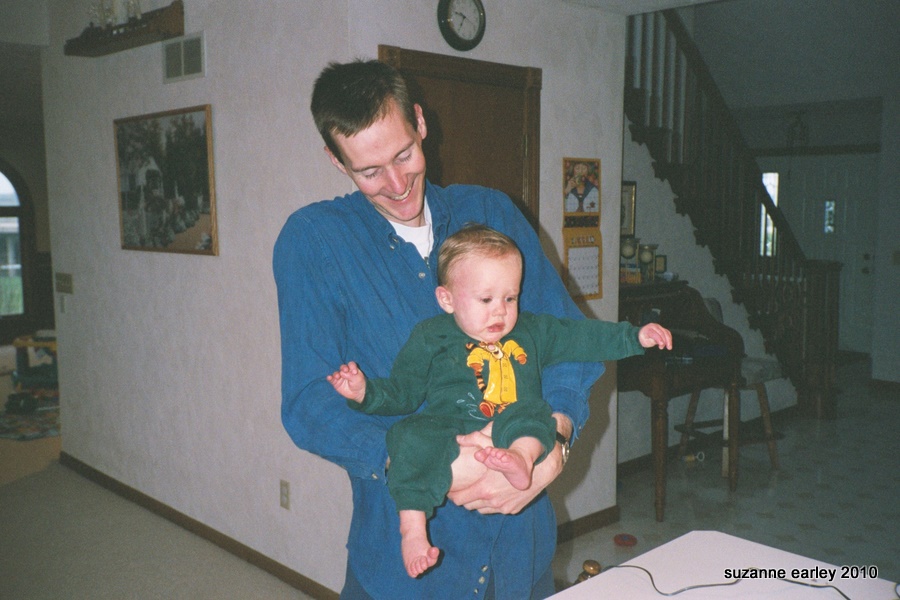 Umm…and because someone’s going to ask, that’s probably Joe, because he was wearing green.