You are here: Home / Blog / Family / What I Did on My Summer Vacation

I just kinda left with no notice and no real indication of where I was going or what I was doing.  Sheesh.  How rude!

Apparently I needed to go on vacation…

On the way we checked out Gettysburg, PA.  I didn’t know what to expect, but I wasn’t expecting monuments just stuck out in the middle of fields.  We didn’t have a lot of time, so we only checked out one field, plus the cemetery.  Oh, and the boys climbed up one of the big observation towers.  I stayed on terra firma.  The report was that the tower was swaying, and that’s what I’d been afraid of…

We arrived at my sister’s house in time to go check out her town’s fireworks on the 4th.  Sunday was a quiet day laying around her house.  She lives in New Jersey in a really cute house in a really cute neighborhood.  I don’t want to get in trouble for providing too much detail that her privacy feels invaded.  Suffice it to say that they live close enough to Manhattan that her husband has about a 30/40 minute train ride to get to work.

Monday was a trip into the city to visit the USS Intrepid, an aircraft carrier that has been turned into a museum.

This is my absolute favorite picture from the whole trip: 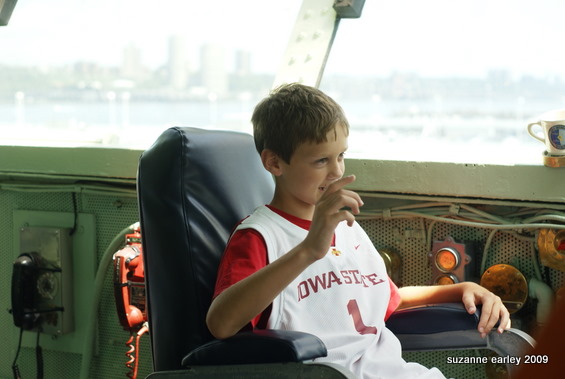 If you aren’t a Star Trek fan, you’ll be excused for not being able to “hear” what he’s saying.***

My other favorite picture is this one: 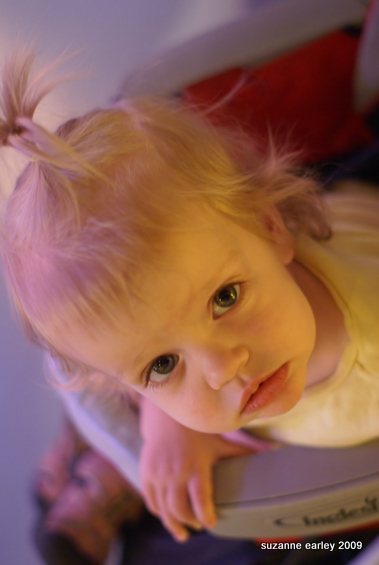 Hannah and I got to hang out quite a bit during the week.  She finally figured out how to walk while we were there.  She’d been knee-walking.  Craziest thing.  Looked hard on her knees, but they were surprisingly unscathed.

The walk from Penn Station to the Intrepid was a lot longer than we were expecting.  Luckily everyone was in a good mood.  Or at least they didn’t complain too much. 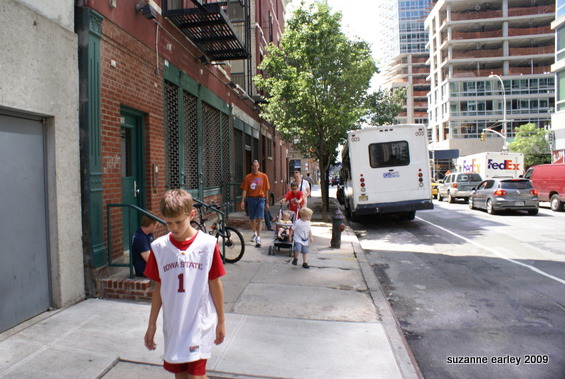 Some of us got rides: 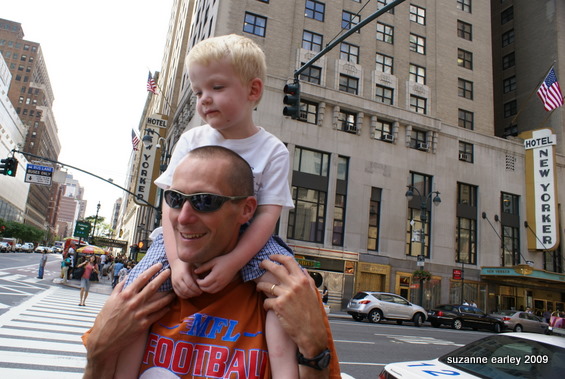 Tuesday was a lazy day, with an attempted trip to the pool.  Unfortunately, two things conspired against us:  one, a storm blew up and we had to leave after we’d only been tehre for about an hour and two, the rules for the use of the pool were a lot stricter than our pool here at home.  I’m not sure nay of the rules made anything any safer, but the thoroughly bummed the boys out as anything they considered “fun” was…against the rules…

Wednesday was a trip to Philadelphia. I remember going to Philly with my Grandma Smeigh, possibly with my brother? David? That was…a long time ago.  I remember sitting in the room where they give the lecture before taking you into Independence Hall — it was just the way I remembered it.  The only thing that was different was that I remember getting a copy of the Declaration (or maybe the Constitution?)

I don’t really remember seeing the Liberty Bell, but I do know that the hall it is in is pretty new.  It wasn’t mobbed, but there were still a lot of people.  Unfortunately, our enjoyment was marred by a little bit of excitement:  Will accidently bumped into Joe, causing Joe to kick a big scabbed over scrape on his ankle.  Next thing we know, Joe has blood POURING down his ankle.  Luckily Aunt Debra packs for small children, and she was able to mop him up and slap some band-aids on him. 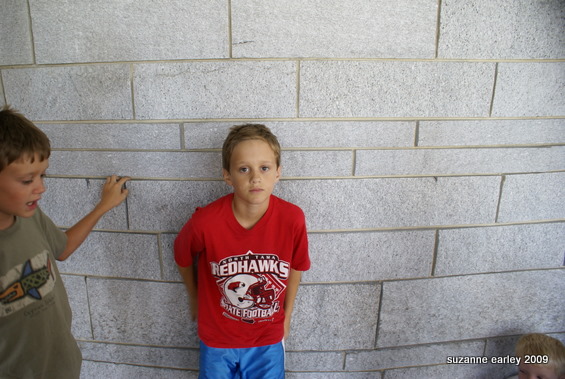 Luckily he never actually passed out.  It was a near thing.  Aunt Debra to the rescue again with some Goldfish crackers and water to revive him.

The trouble with trying to take pictures of your offspring with the Bell is that you get pictures of everyone else, too. 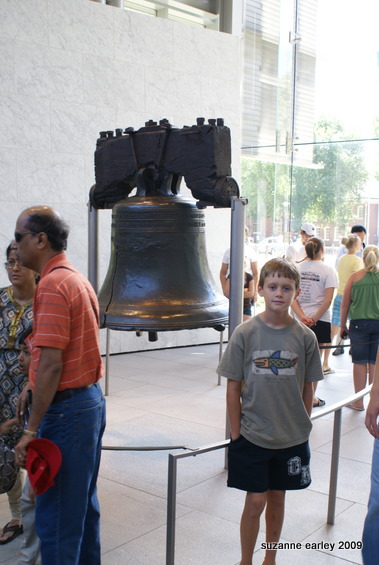 The highlight of the trip to Philly was actually the trip into the US Mint.  Unfortunately, I didn’t get to go, as they don’t allow cameras, and Deb and her kids weren’t with us at the time, so someone had to stay out and hold onto our stuff.

Unfortunately, after Philly, I never managed to pull my camera out again.  Mark did, but I don’t have copies of his pictures yet.

Thursday was a trip to Six Flags.  Mark and Joe only missed one of the Roller coasters.  Will likes some roller coasters, but he pretty much refuses to go upside down, so he spent time hanging out with me, Deb, and the little kids, or later…just me… The craziest thing was that it was cool all day long, and by the end of the day we bought SWEATSHIRTS for the boys, they were so cold.  In July!!

Friday was a trip back into the city, we got to do the NBC/Universal Studio tour, plus visit the M&M Store and the Toys R Us in Times Square. The sheer amount of PEOPLE in Times Square was…off-putting.  Can you ever go to Times Square and not have it be mobbed anymore??

Friday evening we got on the train and headed out to Queens to Citi Field and a Mets game.  My brother-in-law got us the most amazing tickets — we were at field level, 4 rows up.  We could see blades of grass.  Very cool.   The game?  Not so great.  It wasn’t very exciting and the Mets lost to the Reds.  We then had to figure out how to get BACK to NJ, by ourselves (without Deb and Matt helping us), at night, with a million other people.  I’m not sure who was more worried, Deb or us.  Luckily we figured it out, got on all the right trains at the right time, and found our way back to our car with no incident.

Saturday it was time to hit the road:  we headed for Hershey, PA and a visit to Hershey’s Chocolate World.  We had thought about goign to Hershey Park, but are glad we didn’t bother:  it was more expensive than Six Flags, had fewer rides, and…it rained.  We did the Chocolate tour, ate some really amazing Peanut Butter Cup sundaes that had amazing amounts of peanut butter and chocolate on them, visited some outlet shops, and then headed west.  We actually got farther than we originally planned, and managed to make it all the way back home on Sunday.

And so that’s what I did on my summer vacation.  There are more stories, of course, and maybe a rant or two about hotels and other things, which you might get to hear in the days to come.  In the meantime, I’ve probably bent your ears for far too long, so…until tomorrow…