You are here: Home / Blog / Other / Rebooting a project 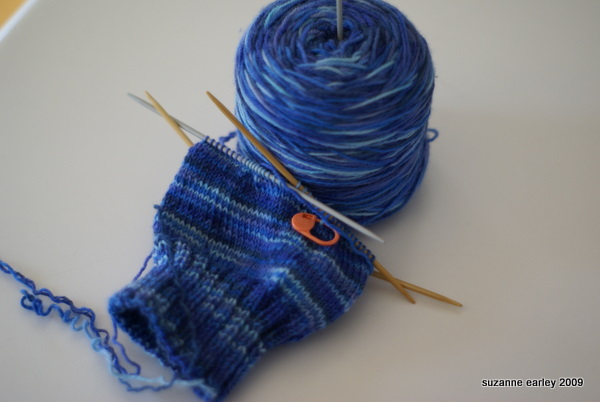 Way back in October, I started making a sock using this scrump-dilly-icious sock yarn.  Over the course of many months, I even got as far as turning the heel and starting the foot.  I even posted pictures of the sock in progress.  Said sock was also the source of Dramatic Exit post

After I got the heel turned I decided to try it on.  Slipped te stitches onto some waste yarn and pulled it over my big honkin size 11 feet.

Many bad words were said and the sock was set aside.

See, I hadn’t made it BIG enough.  It was sort of big enough, but not really.  I could get it on, but it was just too snug.

I rilly rilly rilly want to WEAR a pair of socks made from this yarn, and I was afraid that if I continued on the path of not-big-enough, I’d never actually wear the damn things, and I was NOT going to give these socks away to anyone else.

Ironically, I’m finding that this sock is going faster than the previous non-sock ever went.  I think there are several reasons, one, I’m a better knitter and two, I fixed a technical issue I had with the WAY I knit, and now my tension is looser, which makes it easier to slide the stitches.

Also, the fact that I sat at the computer and watched not one but TWO episodes of Grey’s Anatomy last night whilst knitting away might have something to do with the progress being made as well.