We had an appointment with our financial advisor this evening, it was our annual “how are we doing” meeting.

The poor guy.  I asked him how many times he has said the phrase “stay the course” over the last few months.  I think he’s glad to see 2008 gone, and he tried to sound hopeful about 2009.

After the meeting, we ate supper and then I went and did my part to stimulate the economy, because we needed groceries, bad.

One of the things I bought was new bath rugs for our bathrooms.  Our old bath rugs were wedding gifts, and we’ll be celebrating our 13th anniversary this year.  The rubber backing on the old ones is disintegrating, leaving messes allover the bathroom floors.  Yuck.

I also bought new towels and cannot wait to use them in the morning!

The boys and I arrived at our appointment early, and the only thing I had with me was my camera, so I played a bit with camera settings, while taking pictures of the Visitors Only Parking sign, my checkbook, and the steering wheel.  Really fascinating stuff.  In truth, I learned a few things I didn’t know before, but the resulting photos are nothing to write home about.

I also took a bunch of quilt photos earlier, but I’m running out of energy (and desire) to do anything about them.  Tomorrow.

In the meantime, I leave you with today’s photo.  Will sits directly behind me in the car, and it’s hard to turn around and take a picture of him.  I kind of stuck the camera behind me, and just randomly snapped, and got this one.  It’s slightly out of focus, but I still thought it was sort of cool in a totally “I’m not a real photographer” kind of way.

And then, I played with it in Photoshop and ran an action from Pioneer Woman called “Seventies” and made it even a bit stranger.  Plus, I spot-healed a weird red spot on his nose.

So, yeah.  Here’s the photo SOOC (straight out of camera): 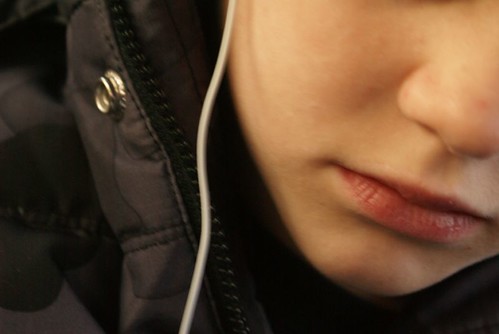 And the retouched photo with frame: 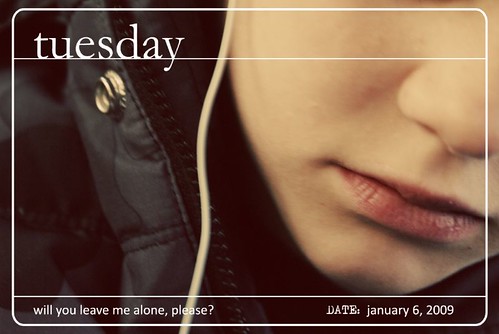 I think it’s got kind of a cool, funky feel to it.  I’m not entirely sure about the caption I gave this one.  I was trying to be clever, playing on the fact that it is Will in the picture.

I can see that I need to learn how to smooth out his poor chapped lips a bit.  Of course, I could always give the poor kid some Chapstick or Blistex or something.

Speaking of which, DANG IT.  Blistex was on Mark’s shopping list and I just now remembered that I forgot it.

It was even written down for me.  As you can imagine, he won’t be surprised that I forgot it.  I got everything else on the list.  I think.

Except.  I returned a gift that needed to be returned, but didn’t manage to go look for a replacement gift.  Oops.

I think I’d better quit rambling and go hit the sack, so I can wake up refreshed and sort through the quilt pictures I took.

p.s. speaking of unforgettable, you should check out the pictures my mom posted on her blog today.  she’s been digging out some more doozies.  wow.