These were actually done last night, but it was too dark to take pictures.  And the pictures I took this morning aren’t all that great, but I wanted to have them “modeled” by my helpers.

Get it?  Fraternal Twin Quilts?  The same, but not the same? 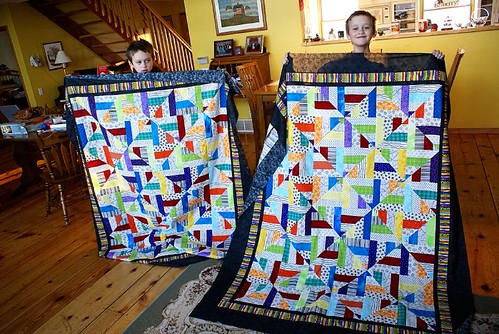 I guess it helps to know that the boys are Fraternal Twins.  (Speaking of which, I never did write any more posts about having twins, did I?  I’ll have to remedy that).

Excuse all that stuff you can see laying around in the background.  And the Be Merry sign in the window.

Honey, I found another Christmas deco that didn’t get put away.

We had our Christmas countdown calendar (frozen on 7 days til Christmas) on the wall until a few days ago.

The pictures I took this morning weren’t great.  The boys had no interest in helping me. 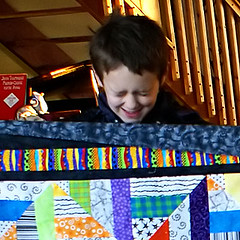 But I wanted to show you what the original picture that I showed above looks like: 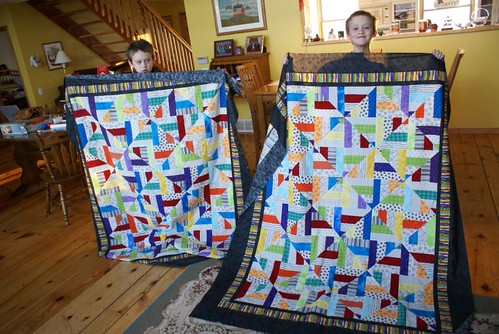 I still have a lot to do to figure out how to get the picture coming straight out of the camera (SOOC) to look good, but I feel like I’ve been let into a secret society now that I’ve figured out to make the pictures I do take look better.

And then the two side by side:

(to see it larger, click on the picture, then click on ALL SIZES (up above the picture) which will give you different size options to look at)

I did several things to this picture, including sharpening it, running a noise reduction filter, and running an action called Boost, from The Pioneer Woman.

My aim is not professional photography, or doing lots of fancy touch-ups…and I’m not saying the fnial result is great, but it sure is a lot brighter and sharper.  Of course, I’m also something of a geek (OK, a LOT geek), and this sort of thing thrills me in the core of my geekiness.

Time for my inner geek to go shower and get breakfast and get moving.  Have a great day!