I think that might be the new name for my blog.  “Adventures of Easily Distracted Girl.”

But first, I needed to put some laundry away.

Plus, I needed to help Mark with his haircut (he does most of it, I clean up the back of his neck).

Plus, he mentioned something about looking at new cars, so I had to go look up some things about the car we were talking about.

At some point, I managed to return to my room to re-discover the pile of clothing on the floor (that I was going hang up) and take care of it.

And eventually the rest of the sewing stuff that was piling up on the MBR floor got moved upstairs.

But first, I had to have Mark help me readjust the table.  When I got my Bernina (4 years ago?) I got a sewing table with it, that the machine sits down in, so that it is flush with the table-top.  Only, the shelf the Bernina sits on needed to be adjusted so that it was actually…flush…instead of sticking up about a 1/4 of an inch.

I’ve been cursing that out for 4 years, and of course it only took him about 20 minutes to fix.  Why do I let stuff slide like that????

So.  Here’s why I needed to spend time clearing a space: 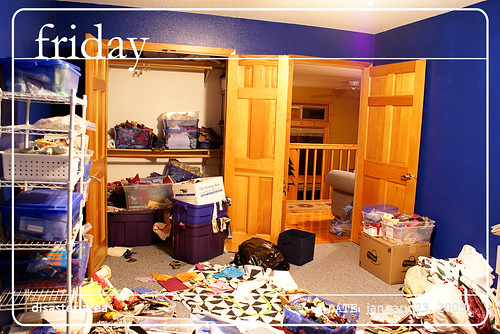 Here’s a (blurry) picture looking at that room from the other direction: 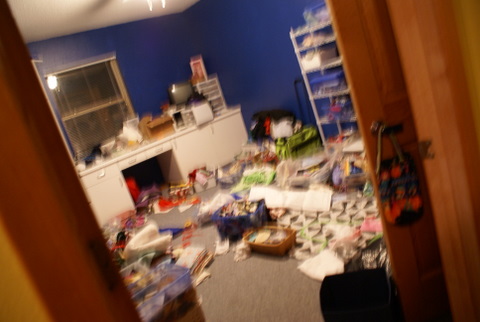 I’ve just been piling and setting and stashing and pulling things out (and not putting away…).

The closet (in the top picture) has shelves on either side that you can’t see. Those are full of fabric. I still don’t know where everything’s going to go, but I did make a lot of progress today. Though, it doesn’t look like it, because the room is even more crowded now that the sewing machine table has been moved in. 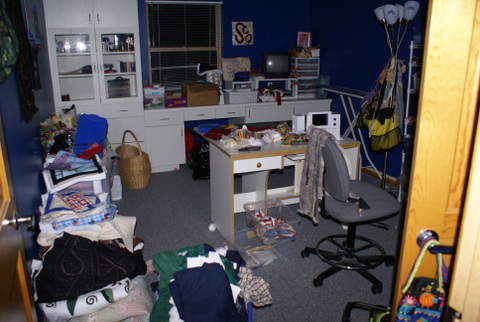 The hard part was the uncovering of things that I wanted to work on. This one just needs borders, that one just needs another block, this one needs to be started from scratch. I did not allow myself to be distracted, though, which was painful. Because as soon as I start working on something, I’ll just quit the organizing and go back to the mess-making.

But first, I need to do about a million other things.