You are here: Home / Did you miss me?

Did you even notice I was gone?

I wish I was still here: 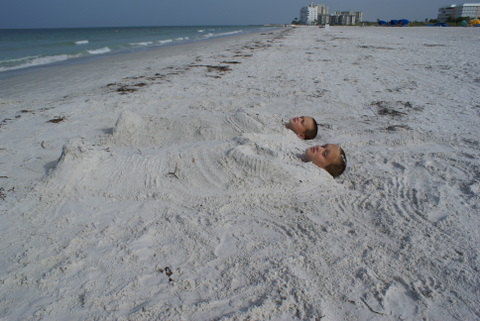 We thought about leaving the boys buried in the sand, but they escaped.

More about the trip later, I’m beat.  We drove to Florida, spent time in the St. Pete area with Grandpa Carl and Grandma Judie (and my sister and her family), drove over to Orlando to go to Seaworld, and then further over to go to Kennedy Space Center.  Back to the Gulf side to spend a few days at the beach (including a trip to the water park, Adventure Island), and then north to come home.  Through Great Smoky Mountains National Park (where it was foggy and rainy, and we couldn’t see anything.  Oh, and the boys were sick), and then on to Mammoth Cave National Park.  Made it home this afternoon and have a gob of laundry to do, plus maybe some sleep to catch up.

Mark did the bulk of the driving, and I managed to knit like crazy most of the way.

We had a wonderful trip, and even though my body is tired of being cramped in a car, I am refreshed and (almost) ready to get back to work on the millions of things on my to-do list.

But maybe not until Monday.

I don’t want to bore anyone with a big huge trip report, but you’ll probably have to endure a few of the best pictures and stories from along the way.

The keyword from our trip was DUDE.

Dude.  Put on a shirt.  (directed at people of both genders)

Dude.  Don’t pull in front of us and slow down!

Dude.  That cave is humongous!  Mammoth even!

(Dude is obviously said with varying inflection depending on the circumstances).