You are here: Home / Blog / Uncategorized / Did you miss me?

I didn’t go anywhere.  I’ve been here.  But really, there’s been so little to talk about, it hasn’t seemed worth bothering you with a blog post.

Well, I haven’t exactly been here at home the entire weekend — I took my mom to the airport on Saturday, so she can spend a week cuddling her new granddaughter and playing with her adorable 2 year old grandson.  She’s not going to want to come home to Iowa!  The first thing she told me when I talked to her after she’d finally arrived (which was an ordeal thanks to weather…) was that there was not a lick of snow to be found anywhere in New Jersey (at least that she could see).

We actually had some melting action going on today, it was all of 35 degrees!  Wheee!  With any luck the kids will actually get in a full week of school this week.

The only sewing that has been taking place has been done by the two monsters I’ve created.

“Mom, can we work on our blocks now?”

We actually had a nice time this weekend working on their blocks at various times over the weekend.  I’m doing all of the cutting, matching, pinning, etc.  They are doing 99% of the sewing.  I say 99%because Joe’s block actually requires a partial seam, and I’m helping him with that part.  They are also getting to do most of the pressing. That’s a learning curve, too!

Here are Will’s first two finished blocks.  The quilt he picked is called “Ozark Maple Leaf.”  Both quilts are from the book Nickel Quilts.

He is doing an excellent job of sewing a nice straight quarter inch seam.  Any lack of precision is in his blocks is solely due to his mother’s cutting.

Joe’s block is made of quarter square triangle units, and are made in such a way that you end up with units that “face” different directions.  We still aren’t exactly sure how he is going to make use of all of his pieces.  His original plan was to make the blocks as shown in the bottom left corner of the photo, and then make the pinwheels as shown in the upper left (and make them into a Quilt of Valor quilt).  He has since decided that maybe he wants to make some of his blocks like the block in the lower right.  I’m letting him make the creative decisions, we’ll see how it goes. 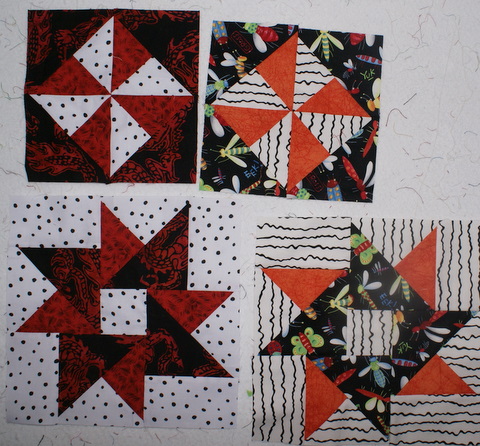 He is doing quite well, also.  His blocks require sewing on the back on drawn lines to make the initial units. It’s more sewing than Will’s, and he’s been a little bit frustrated, but I think that being able to see what the blocks are going to look like has helped.

I haven’t taught them how to use the seam ripper yet, but I’ve had to use it on several different blocks.  Veering drastically off the drawn line…forgetting to set the needle to the correct position when we switch between boys who are working on different techniques….

It’s all part of the process, and I know that not only are THEY learning a lot, but I’m learning (and relearning) a lot as well.  Explaining why I do certain things has been interesting.

Well, maybe I’ll get some of my own sewing done tomorrow.  Wouldn’t count on it.  For one thing, my sewing room looks like it exploded with bits of the boys’ projects strewn all over (all my fault, not theirs…)

For now, though, it is time to say good night!