Unfortunately, I wound up with another cold, and  my head feels like it is going to explode again.  Flying with congestion is not recommended.

I’m not sure how many vacation pictures I’ll share, but I’ve started going through what we took and thought I’d share a few.  These will probably end up being completely out of order

Our list of Things We Really Wanted To Do in New York City included a trip to the Statue of Liberty.  We ended up doing that on Wednesday, which, ironically, was the day that had the worst weather.  We could barely see Manhattan from the Statue.  And it drizzled on us most of the day.

Couple of things I wasn’t expecting:  first off, technically Liberty Island is “in” New Jersey.  Second, she wasn’t nearly as big as I was expecting.  Don’t get me wrong:  she’s big, and she’s pretty amazing, but…not as big as I thought she was from seeing her in movies and in pictures.

We did get to go up into the pedestal (visitors are no longer allowed to go up into the Statue itself:  after 9/11 they started enforcing fire code, which would have made it nearly impossible for anyone to go up, so they just stopped letting people up at all.  Prior to 9/11, they would let something like 300 people up at a time, fire code would have limited it to 5 people an hour.)

It was still a pretty impressive view (even with the mist and fog) and they have a nice museum inside the pedestal.

One of the things you see is this replica of her face:

This is probably sacrilegious, but you do know what the next picture is, right? 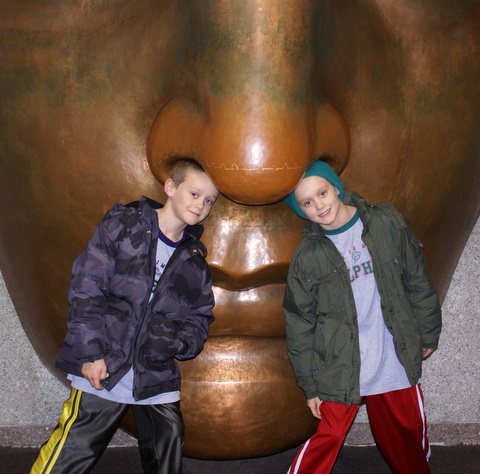 I mean honestly, how can you expect two 8 year old boys NOT to put their heads up her nose?

I can’t remember how long we had to wait to actually get into the pedestal/museum.  It wasn’t so much the quantity of people as it was the security check.  We had had to go through security in order to get on the ferry, but this was an additional security check which included a machine that checked for explosives.

We did go to Ellis Island, but didn’t spend much time there.  The boys were completely uninterested, and we didn’t want to miss our assigned time for the trip to the Statue.

And even though the weather was a little bit yuck, we were glad we took the time to go see Lady Liberty.

More later, I have to go blow my nose.