You are here: Home / Saturday report

I’ve been quite busy the last few days, but not with anything I can really blog about at the moment.  I’m testing a pattern for a friend, and do various other sundry things.

Here’s the palette for the quilt I put together as I tested the pattern: 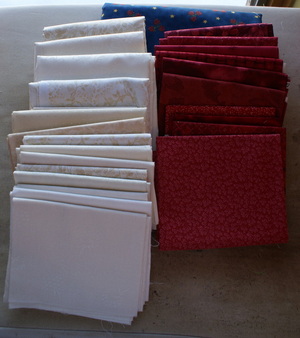 Reds and whites with a little tiny bit of blue….it’s a ery cute, relatively fast quilt, and as soon as I can say more  about it, I will!

I signed up to take a MOnoprinting class from Joggles.com.  My friend Lynn talked me into it.  I’m really excited about it, but upon receiving the first lesson, I discovered that I had not managed to order the Soleil paint that I needed for the first lesson.  Oops.  It’s on its way now, and hopefully I’ll get to play with it early next week.  We’ve actually had quite a bit of sun the last few days.  I just wish we had warmth to go with it.  We’ve been hovering around 0 F for quite some time now. It feels like months, but I think it’s only been about a week.  I have circulation problems with my fingers and toes, and walk around half the time with white, numb digits.  Brrr.

It is very quiet at my house today.  Well, except for the sounds of my DH doing his small construction project in our basement.  Free from the sounds of small boys — Grandma offered to take them for the afternoon/evening.  We’ll be heading to the Big City later to have supper and do some shopping.  Mark thinks I’m going to let him take me to Burger King or Wendy’s.  Ha!  I want to be SERVED, not carry a tray from the counter!