Yesterday was supposed to be my "reveal" day, but I didn’t quite make it.  As I attempted to say in yesterday’s post, it’s not completely done, because I’m not sure where I’m going with it.

My theme is supposed to be the Alphabet.  For no real reason, I decided to start with T — for Tree.  I drew some sketches in my altered book (you can see those here).   I used a piece of 12×12 paper to play a little with the layout, and drew/colored a tree that you can see here.

It then dawned on me that I could bring in another "T" word and decided to use Threadpainting for my tree.  My first experiment involved my longarm, some cotton and poly threads, and some dissolvable stabilizer.  It wasn’t a disaster, but it didn’t turn out like I expected.  I know what I did wrong, and if I ever try it again, I have some ideas of what to do differently.

From there, I decided to load up a layer of batting, a layer of Vilene stabilizer, and some background fabric to which I had fused a tree.  I used a variety of my brand-new ARC Poly thread to do the thread-painting.  I forgot to take a picture before I started stitching, but here it is in progress.  You’ll note that the tree is flipped from previous pictures.  Fusible web appliqué will do that to you if you don’t think ahead… 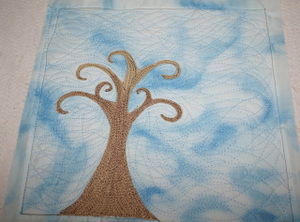 Once I all of the threadpainting was done, I blocked it, added the black frame and did some outline quilting with clear thread: 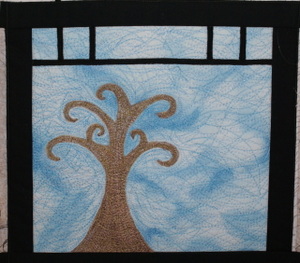 And then I started to bead.  And while I was beading I contemplated.  For one thing, both my husband and my mother said they thought it looked like a window.  That wasn’t my plan, but, yeah — it does, and I really like it.   So the internal debate was — do I go with my original plan — the upper sections are supposed to be where I put the lettering — Big T little t, etc…(and how was I going to implement the lettering….) or do I do something different.

And then I thought some more.  I thought about other ways I could use this same layout and do trees.  Maybe trees with fabric leaves, instead of beads, maybe focus in on a branch.  Maybe, experiment with different ways of creating the same tree (i.e. start with the same shape, but try out paints, or ink, or silk fusion, or, or, or….).    I’m also undecided about how to finish it off — will they be individual 12×12 quiltlets, or will they be pages in a book, or will they be put together into one larger piece?

Last night I did end up finishing my beading.  I might add another 1 or 10 here or there, but for now, it’s done.  I don’t have a lot of time to decide how I’m going to tackle February’s piece, but the wheels are turning.  As I said yesterday, I have found myself thinking about this in terms of "the trouble is…."  I realized, though, that I have no TROUBLES — just OPPORTUNITIES. 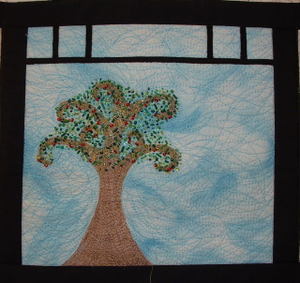 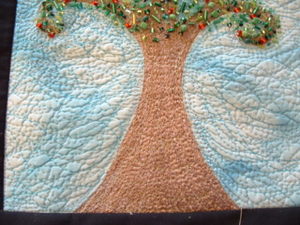 Very shortly, I’m going to create a photo album to put all of these pictures in, so you can see all of the steps/progress in one place.  I’ll plan on adding to that album as the year progresses.