You are here: Home / Online Learning / Shakespeare so far — #ShakesMOOC and #FLShakespeare

As you may recall, I am taking two different online Shakespearean courses. One is called Shakespeare: On the Page and in Performance (hereafter referred to as ShakesMOOC), and the other is Shakespeare and His World (aka FLShakespeare).

Before everything gets away from me, I wanted to post some thoughts on the plays that I have read thus far. I’m trying to keep this brief, but then I start to get carried away, so please, bear with me. 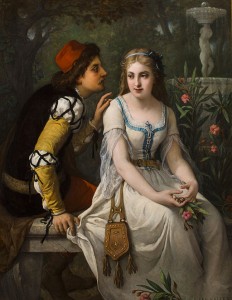 I read this originally in HS and was turned off by it, and thus Shakespeare in general. Reading it as an adult for ShakesMOOC, several things come to mind. First, seeing performances of it, especially Baz Luhrmann’s Romeo+Juliet from 1996, brought home the emotion of their tragedy more completely to me than just reading it.

I resisted the love story the whole through — I don’t have a lot of patience for the overly dramatic. To me, the leap they both make from being instantly in love to suicide being the only option in the face of obstacles is unfathomable to me. Maybe that makes me a pragmatic old fogey, but I kept thinking DUH. Use your resources! Better to live apart now and retreat a bit, to come up with a better plan later!

This will never be my favorite play, but I have a much better opinion of it now. This is, in part, because I am more comfortable with the language, and I came to it with a much more open mind than I probably did when I was a sophomore in high school.

The Merry Wives of Windsor 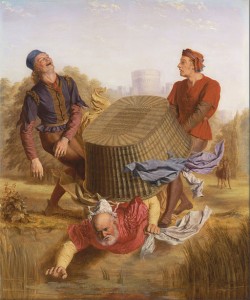 This was read for the first week of FLShakespeare. The focus of this class is a little more historical rather than literary — it isn’t dissecting the text as closely, and is using the play as a vehicle to draw out certain aspects of Shakespeare and his life and times.

MWW was a bit of a palate cleanser after the deep, dark depths of R&J, although a lot of the humor and puns went right over my head. I did enjoy it, but don’t’ have a lot more to say about it. That makes it sound forgettable, and it wasn’t, I just didn’t have as much of a connection with it as I do with the others that I’ve read. 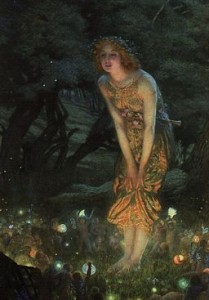 This is one of two plays shared between the two classes. I read this for FLShakespeare about two weeks ago, and we are now starting on it for ShakesMOOC. I am a fan of the comedies. I don’t think (at least I hope!) that this isn’t because I am shallow or superficial and just want to laugh. Even the comedies have serious moments, and challenging themes and language. Just in the first videos of the ShakesMOOC class on MND, I’m learning about the topic of transformation, and how prevalent that theme will be, from the first scene to to the end.

I suspect I’ll have more to say on this play later.

This is another one that I read for FLShakespeare. I read some of it by reading the text, and then checking comprehension with a modern text translation, and also watched parts of it on YouTube — various staged and film versions of it. I find myself a little surprised that I’m looking forward to watching a full filmed version. I thought the history plays were probably kind of boring, but….there is still plenty of humor throughout, and seeing it performed makes such a difference. I was also surprised (and yet, not…) to learn some cultural references that are familiar to me…are originally from this play. The phrase Band of Brothers — is a Henry V reference to what I have since learned is a fairly famous speech from the play.

I’m not even sure what to say about this tragedy. To me, this is far more heartbreaking than R&J could ever be, I think because everything starts off between the two lovers in a way that I was much more willing to buy in to. The main thing I’ve gotten out of the class videos and subsequent discussions is that there really are no easy answers. Iago is evil, but I just can’t let Othello off the hook. Race is involved, but is it a racist play? One of the exercises we could choose to do is a close reading of a short passage. I managed to write 350 words without even trying analyzing just 4 lines of the play. So much detail and so many layers to dig through — so many interesting word choices that give so much meaning that a reader doesn’t even completely grasp at first. Or even second or third! It’s definitely a lesson for someone that might want to be a writer to consider how much weight different words can convey. A lie is one thing, but slander — so much more meaning wrapped up in that word. Slander isn’t just a falsehood, it’s a lie that is malicious and intended to harm.

Overall, I’m glad to have read this, and will be revisiting it for FLShakespeare in a few weeks. I know that it will continue to haunt me.

As I mentioned above, ShakesMOOC has just started discussing A Midsummer Night’s Dream. The Merchant of Venice is up next for FLShakespeare. I haven’t started reading it yet, but when I contemplate it, I keep getting Shylock conflated with Sherlock in my head. Which isn’t all bad, because then I get to think of Benedict Cumberbatch.