So, my last post was all about how I intended to write more and sooner about the books I had read, and yet here it is, however many weeks (um, months…) later, and I haven’t written another word. I’m going to just post about all of the 2011 books in one go (I’ve still been reading). And then move on.  (In April 2015, I started reading all of the Michael L. Printz award winning books. Here‘s a summary of what I’ve read and what I have left). 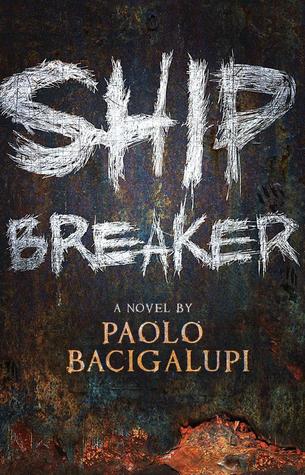 Ship Breaker by Paolo Bacigalupi — I don’t think I would have picked this up on my own without the Printz Project. I’m a little weary of post-apocalyptic dystopian fiction and I had trouble getting into it, but over the past few days, it’s been hard to put down. It’s pretty horrifying and brutal, but compelling. The world-building is quite original and well done and the main character, Nailer, is very likeable. (4/5 stars)

Stolen by Lucy Christopher — I did not care for this book. I didn’t like the story, I didn’t care about the characters, I disliked being manipulated by the author. I know that’s ironic, because so many times, that’s what’s going on: the author wants you to feel something, and in this case, I didn’t like what she wanted me to feel. (1/5 stars)

Please Ignore Vera Dietz  by A.S. King — I gave this one 4/5 stars on Goodreads when I finished it. Apparently, it didn’t make much of an impression, because it hasn’t stuck with me. I’m reading a few of the other reviews and I just don’t remember many of the details, or even what I really thought of it. I guess I do remember the narrator having the kind of humor I like to read.

Revolver written by Marcus Sedgwick — Short, very spare, and thought-provoking. Yet another book I would have never picked up if not for this project, but I have liked everything by this author that I have read (and I see that he won in 2014 and is on the honored list for 2016).  (4/5 stars)

Nothing written by Janne Teller – Thankfully, this was a quick read.

I try to make a distinction between “this isn’t for me” and “this was terrible” when I read books that I don’t care for. I’m trying very hard not to lean towards the latter on this one, but considering that this book won tons of awards, I guess I’ll stick with the former.

It was a bit of a train-wreck kind of an experience. I couldn’t look away and the direction this book took was all kinds of messed up. I had a hard time suspending disbelief (these were 7th graders? even if they are a year older than US 7th graders, really??), and I wonder if some of the writing style worked better in the original Danish, because some of the writing was very jarring. (1/5 stars)

So, either I liked the book or I loathed it for this batch. Nothing really in between. Ship Breaker and really anything by Marcus Sedgwick are definitely recommended.