The quilt on the frame doesn’t really appear much different than it did last week — I have made some progress, but didn’t get as much done over the weekend as I hoped.

The pink/blue/green quilt I’m piecing doesn’t look any different either — although I do have some more small units put together.

Today ended up being a day off of school (snow and cold. blech….) and so, instead of doing something like straightening up or putting away my laundry or anything useful like that, I pieced something new. I’m allowed: it’s a gift, with a deadline in March. I had some color ideas, and bought some fabric last night, but had no idea what I was going to make. I made some abortive attempts at a few things, and then poked around Pinterest where I found exactly the right thing (the sample was even made in the colors I wanted to use!).

And…I got a LOT done today: 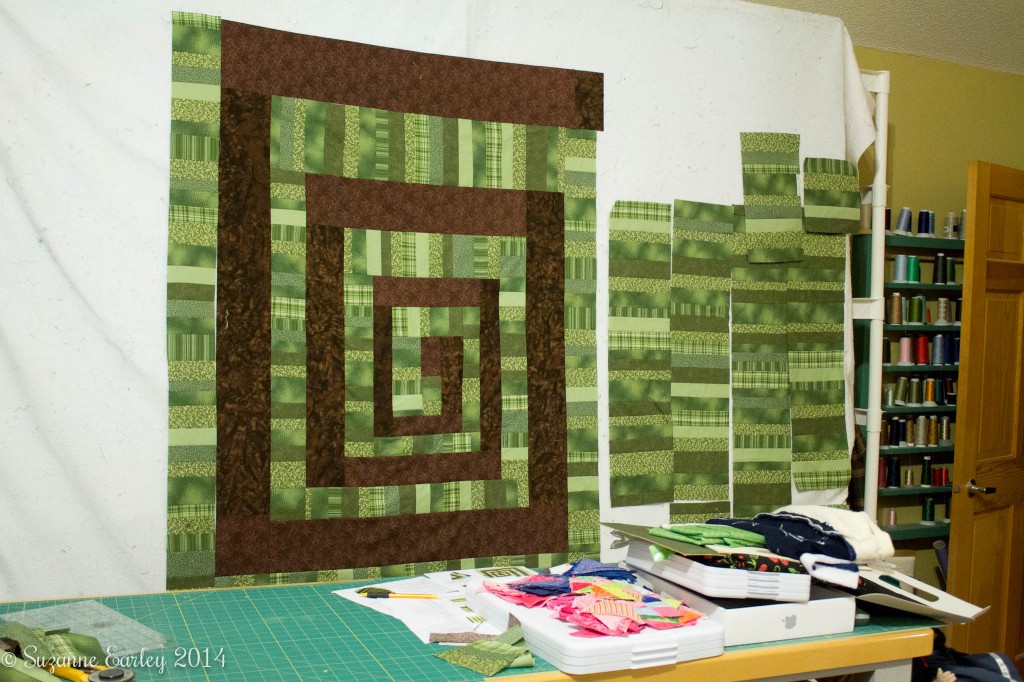 The pattern is called “Helix,” it’s from an ebook by Emily Herrick, called “Geared for Guys.” I was trying to figure out how to make it myself, based on pictures, but that only lasted for about 5 minutes before I realized I was being stupid and making myself crazy, and there’s too much crazy around here already.

Several episodes of Castle, Bones, and Elementary later and…I’m nearly at the point in this where I get to whack off the corners at 60 degree angles and then continuing adding pieces to make it a rectangle again. Quilting is funny, isn’t it? Cutting things apart and then sewing them back together….

I can’t wait to finish piecing this, I think it’s going to be great fun to quilt. As I said, it’s a gift, so I’m not going to say much more specific about it until later, but this will probably show up for the next little while as it moves through the process.

We are on a two hour delay for tomorrow, and hopefully we’ll actually have school. It’s the second day of conferences, and Friday is already scheduled to be a day off, as a comp day for the teachers, so…I suspect I’ll get a bunch more sewing and quilting done during my three day weekend!