You are here: Home / Blog / Quilting / Starting an unfinished object

On Wednesday, I posted a pile of fabric, as my “work in progress,” and I’ve been messing around here and there since then, trying to decide what to do with all of it. The fact of the matter is that I’m running out of UFOs! Sort of.

See, in my mind UFOs fall into different categories:

And the quantities of the above have fallen to:

And that’s it. Crazy, right? Especially when I read Kay’s blog,  she’s documenting her unquilted tops and her list is up to 80, heading towards somewhere around 100!!

So, I’m in the mood, and have absolutely no guilt about starting a new quilt. Well, maybe a little bit of guilt, because what I should really do is clean up some of my piles, instead of shifting them around. I’m pretty good about ignoring guilt, though.

My original inspiration is coming from a mystery quilt from Quiltville (the free mystery posts are gone, it was called Celtic Soltice), but of course, I want to change up the colors a little bit. And use a different alternate block with the 54-40 or Fight blocks, because I’ve found that I’m incapable of following other people’s directions any more.

I don’t currently have access to Electric Quilt, so I was thrilled that a quilter from MQResource was willing to create an outline for me that I could color. She got what I wanted on the first try, but ultimately I figured out that I didn’t actually want to use the Corn and Beans block as my alternate block….so back to the graph paper I went, and I think I have a plan. I haven’t pieced a quilt with a lot of intricate piecing in a very long time (well….I haven’t done a lot of piecing, period…)

I fussed around with cutting bits and pieces of fabric so that I could make some test blocks, and now my cutting and sewing tables are even messier than before, but I was able to get 2 blocks together. I took pictures and pulled them in to Photoshop, so I could look at what they were going to look like when I got bunch made, and I’m pretty pleased: 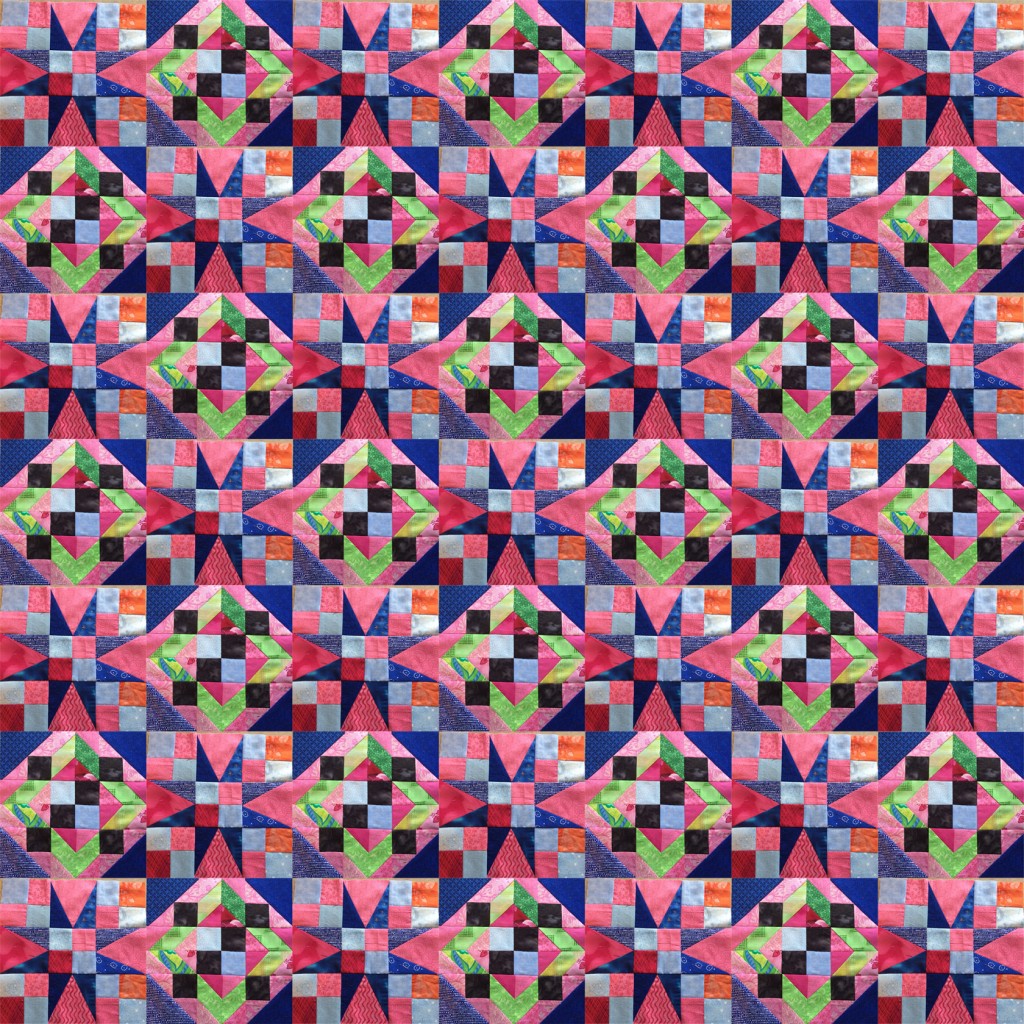 Everywhere that shows up pink is going to be…well, pink, but I’m going to do something crazy (for me!) and throw in some O.R.A.N.G.E to add some sparkle.

Now that I think I know what I’m doing, it’s time to start pressing some fabric and doing some cutting. Well, before I do that, I need to find my ergo rotary cutter. I took it with me to Minnesota at Christmas time, and it came home, but I put it somewhere safe. If I can’t find that, I need to find a replacement blade for my other rotary cutter. Actually, even if I do find the ergo cutter, I should probably look for a new blade.

There’s nothing better than slicing up fabric with a brand-new blade.

There’s nothing worse than cutting yourself with said blade, though, and I promise to be super careful….