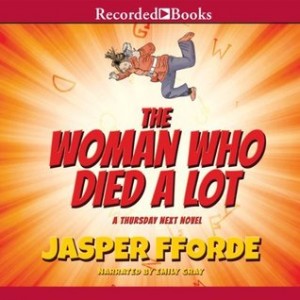 Title and Author: The Woman Who Died a Lot (Thursday Next #7) by Jasper Fforde, Narrated by Emily Gray

(from GoodReads)
The Bookworld’s leading enforcement officer, Thursday Next, has been forced into a semiretirement following an assassination attempt, returning home to Swindon and her family to recuperate.

But Thursday’s children have problems that demand she become a mother of invention: Friday’s career struggles in the Chronoguard, where he is relegated to a might-have-been; Tuesday’s trouble perfecting the Anti-Smote shield, needed in time to thwart an angry Deity’s promise to wipe Swindon off the face of the earth; and the issue of Thursday’s third child, Jenny, who doesn’t exist except as a confusing and disturbing memory.

With Goliath attempting to replace Thursday at every opportunity with synthetic Thursdays, and a call from the Bookworld to hunt down Pagerunners who have jumped into the Realworld, Thursday’s convalescence is going to be anything but restful as the week ahead promises to be one of the Next family’s oddest.

I don’t really remember why I picked up my first Thursday Next novel, all those years ago, but I have sure liked every single one of them. The last few, I have chosen to get as audiobooks from Audible, and I think that has enhanced my enjoyment. I’ll probably mention this once or ten times more: I tend to read really fast, so I sometimes miss really clever word play, and this novel (like the rest of Fforde’s work) is dependent on you reading (or listening) to every word at times.

I would not start here, I would go back to the beginning, and read the first one (The Eyre Affair). I say that, though, as a completist. If I’m going to read a series, I want to read the whole thing, starting all the way at the beginning.

The world of Thursday Next is very strange and wacky and you won’t know if you are coming or going. At one point, I thought the author was making mistakes, and then I realized that no, the story was just that crazy.

A lot of the reason I love these books, and this one in particular, is that they are ABOUT books — the whole premise is that the book world — the world of the characters and stories created in written books — is a real place that people can visit. The imagination that is on display by the author is mind-boggling, and the humor keeps me coming back for more. And this one is about librarians! Librarians who do some awesome insane things (like dawn raids to get books back from delinquent borrowers!!)