OK, I’m just going to go for broke and show off all of these partially quilted quilts, because, hey, why not. My motto has always been “If you can’t be a good example, then you’ll just have to serve as a horrible warning.”

(I will add that I’m feeling quite smug that unfinished quilts #1 and #2 are now quilted and have their bindings attached to the front, which is, like, 99% finished). 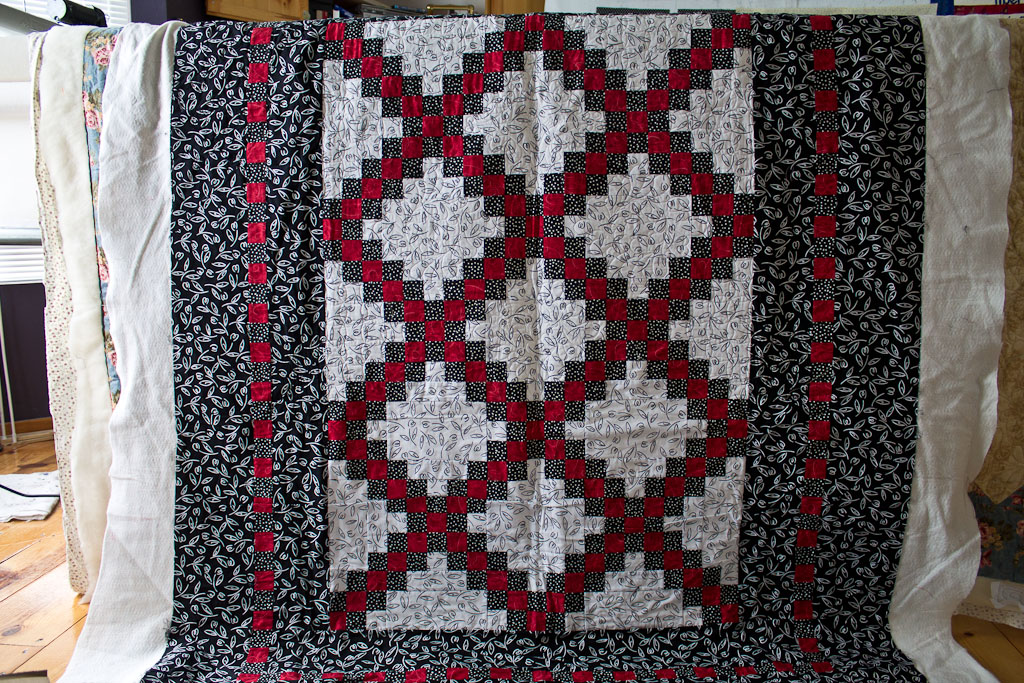 I tried way too many different options for quilting the white fabric in this. I have at least one block that needs to come out, plus part of the black border. The fabric is gorgeous to look at, but nothing shows up on it, a simple allover would have been a better choice for this one. 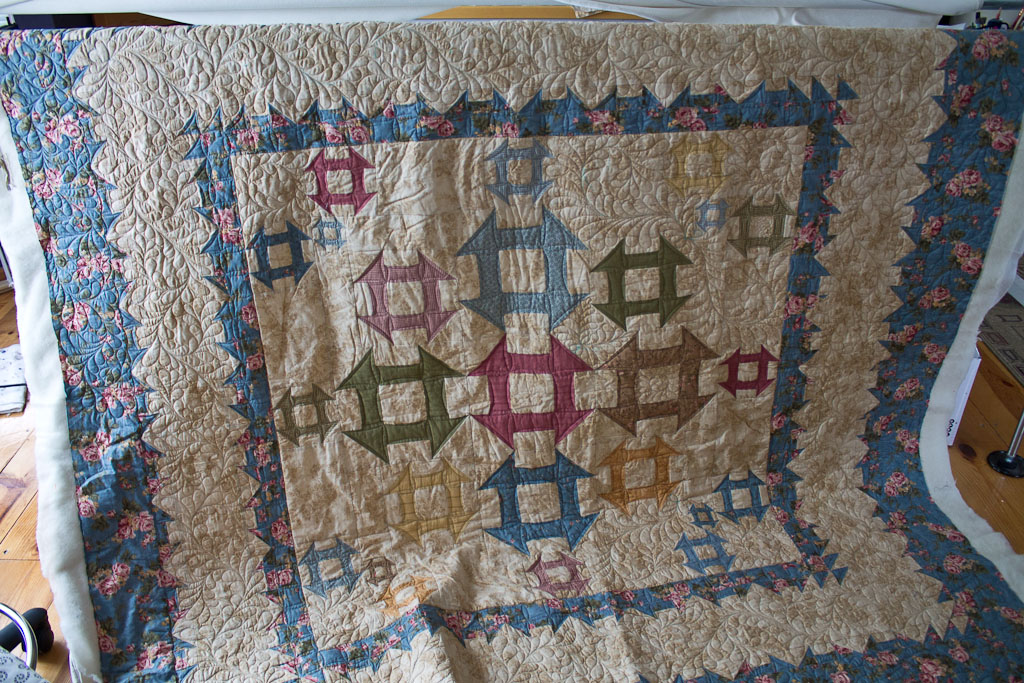 Another misbegotten double batting choice. Why, why, why, did I do this. Also, this was done long enough ago, that the feathers are a style that I haven’t used since…oh, about when I was working on this quilt. There are several block motifs that need to be finished, plus half of two sides of the borders. Also, I started quilting a tiny background fill around the cream border motif. Thankfully, I didn’t do much, because it is totally coming out. 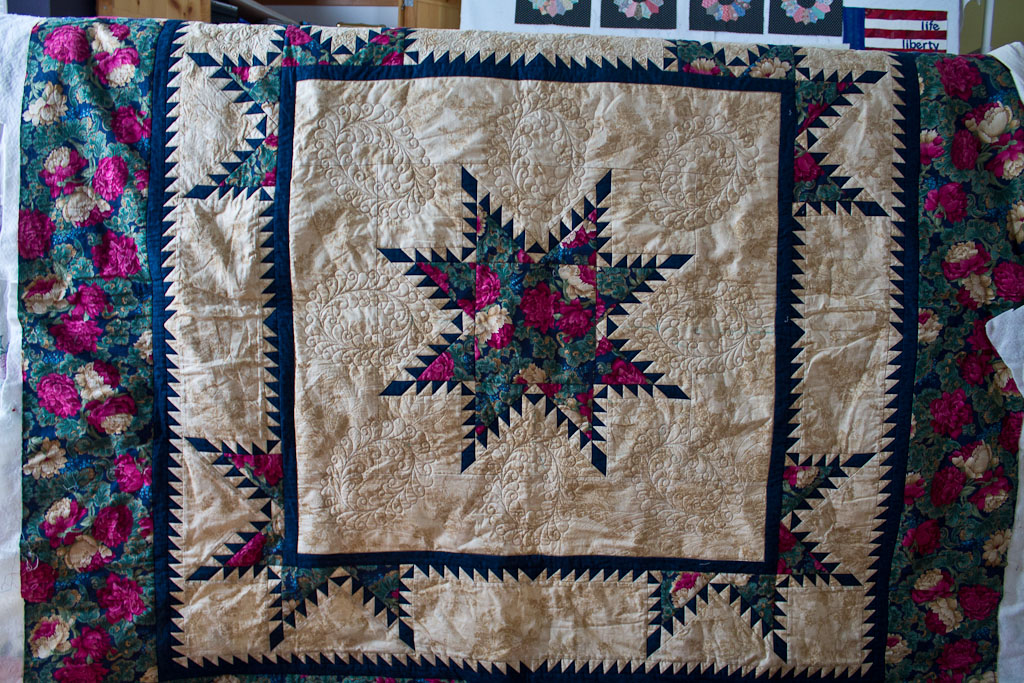 Oh feathered star medallion, how I loved you. And then I totally mucked up your quilting. Twice. I’ve already taken out a bunch of motifs, and redid some of them, but then I started an incredibly ill-conceived background fill (which you can’t see, it’s folded back at the top of the photo). The motifs got completely lost in the texture. Luckily, it’s in invisible thread, so is coming out fairly quickly. I don’t really know what to do instead, though. 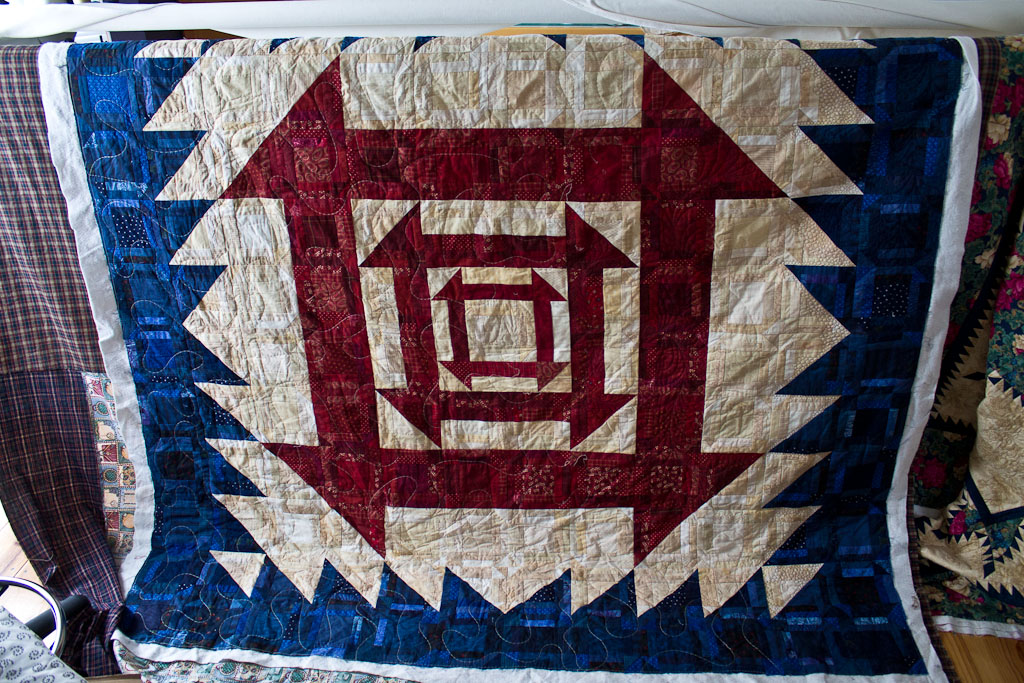 Once upon a time, I saw a quilt that was big Churn Dash blocks made up of little churn dash blocks, and I had to make one of my own. I figured this out on my own, no pattern, and yes, every single block is a churn dash, even the ones that are half and half. I started doing pebbles in the cream and I HATED it. So I don’t know why I kept going as long as I did. Also, I did some work in the dark blue and part of the red that I HATED. So I stopped. All of that is coming out. It’ll take awhile. I don’t know what I’m going to do instead. 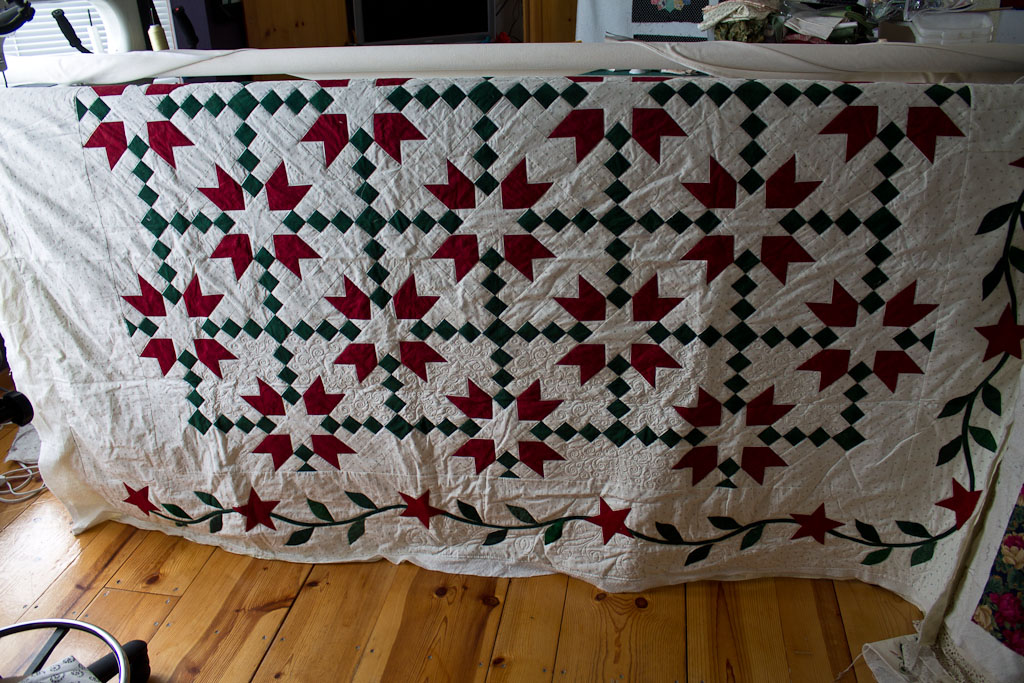 This is probably the oldest quilt in the bunch, I’m pretty sure I pieced this when we stilled live in the Quad Cities, and we’ve been back in Traer for…12 years? It took me a long time to decide how to do the border (ironically, I ended up deciding to follow the pattern. I know. (This is from a Possibilities book.) Very little of the quilting is done. I was using a design on the Intelliquilter, and I think maybe it was just taking too long, so I stopped to work on something else. 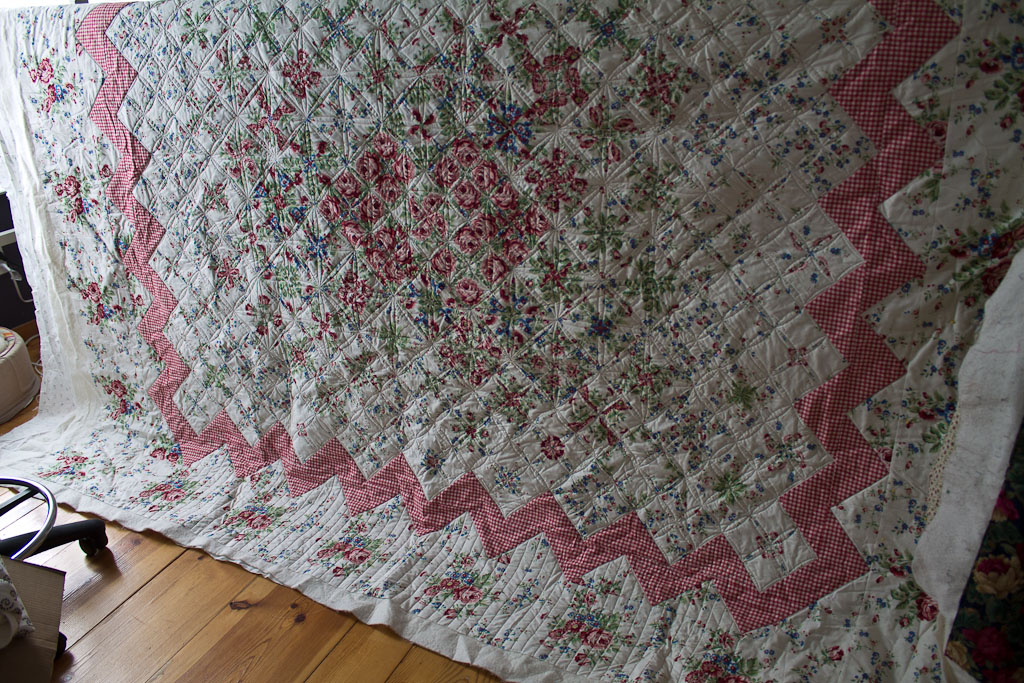 And this is the most recent of the bunch, with fabric from my shop, that’s now been closed for…2 years? My, how time flies. Looking at it, I think the problem is that I couldn’t figure out what to do in the red check border, and the piano keys in the outer border was going to take forever (what you see here is all of the border that is done). The center is completely quilted. As I look it, both in person and on the screen, what I see is that really: I don’t think I actually want any quilting in the red check. I kind of like the way it pops out. So, just finish all of that straight line quilting, and voila. Also, find the binding.

I had another partially quilted piece out to photograph, but it was actually too embarrassing to even post here. And then there’s the quilts that need to have their bindings finished. And we won’t talk about the partially pieced tops. Or the thousands of yards of fabric still waiting to be made in to quilts.

I know I won’t get all of these done before I go back to work next week, but it’s nice to get them out and see just what it is that needs to be done, and to contemplate figuring out how to carve out some time from everything else to actually work on these. I don’t really need to have 2 solid weeks to quilt, I can get it done in 15 minutes here and there. Cleaning up and figuring out just what needs to be done will help. I just hope I can survive basketball season.