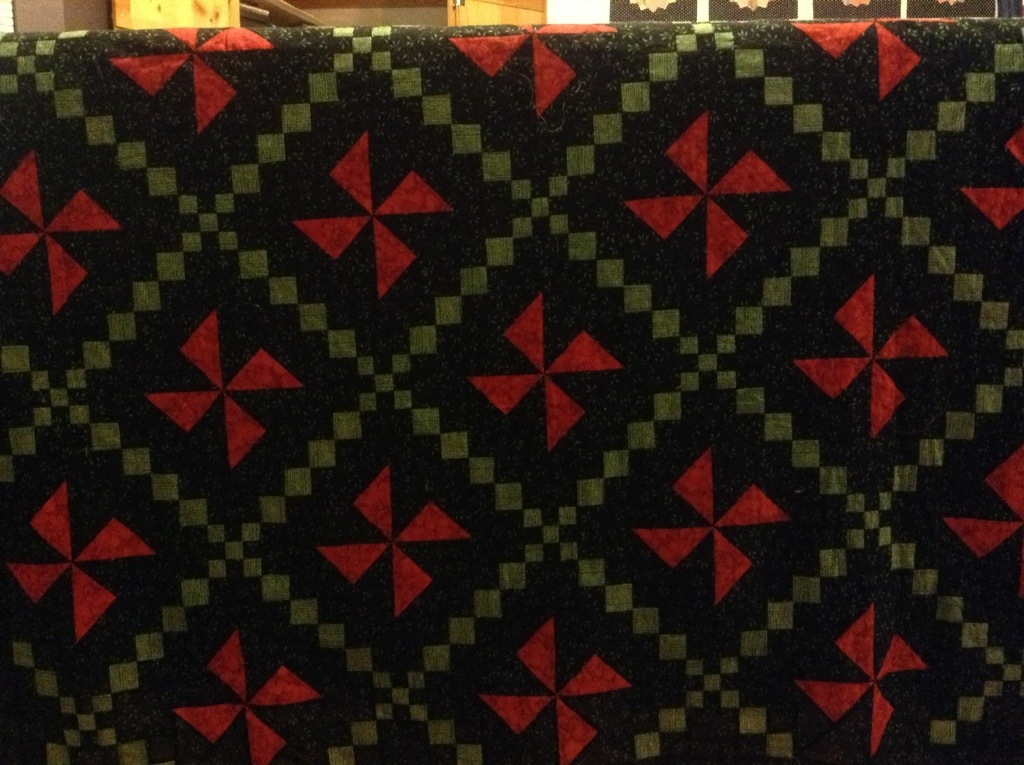 Yesterday’s unfinished quit has moved from being partially quilted to fully quilted, waiting to be bound. Which is practically finished in mind, so that’s progress.

Except, I just realized that there was a king-size quilt sitting on the shelf above my desk that has been sitting there unbound for something like 2 years, so that’s kind of sad.

It’s really too dark for pictures, so yesterday’s quilt will have some beauty shots tomorrow.

Next on the frame: I finished the UNquilting of this bad boy, which is much prettier than this picture shows. It’s lap-sized, and I will put it on the frame tomorrow and see what I can do with it.

I’m guessing, based on a few clues, that this quilt top dates to around 2002/2003. The fabric and pattern are from the quilt shop that was in town when I first got my machine. The biggest clue that it is from early in my machine quilting career is that the backing had a notch to mark the center — which I learned from the Gammill guy that delivered my first machine….I haven’t notched like that in FOREVER.

The quilting itself was black thread (or a really dark gray?), very poorly done feathers on the black fabric. What was I thinking? The quilting was impossible to see unless you got really close, and when you did see it, you wished you hadn’t gotten quite so close.

I don’t know why I did as much of the bad quilting as I did. I have a habit of convincing myself that even thought the voices are telling me it’s going badly, I figure, what? THat if I do more of the bad quilting, it will all cancel out and magically become good? Yeah. Right.

Clearly, I came to my senses before I got too much done, and I pulled it off the frame, but it was enough quilting that I couldn’t face the time it would take to undo it. Every so often, I have pulled it (and several others in similar situations) out of the closet that it’s living in, shuddered, and shoved it back away.

Not this time, though: after several hours of an audiobook, plus a number of episodes of How I Met Your Mother and Warehouse 13, it is all undone. I managed to rip several holes in the backing fabric, so I’ve doctored that with some replacement fabric, and I will start with a fresh batting as well.

I’m thinking MUCH simpler quilting this time. Not sure what, though. Still debating about thread color, too. But I WILL get it finished, and it will NOT sit around for another 10 years. Yikes.