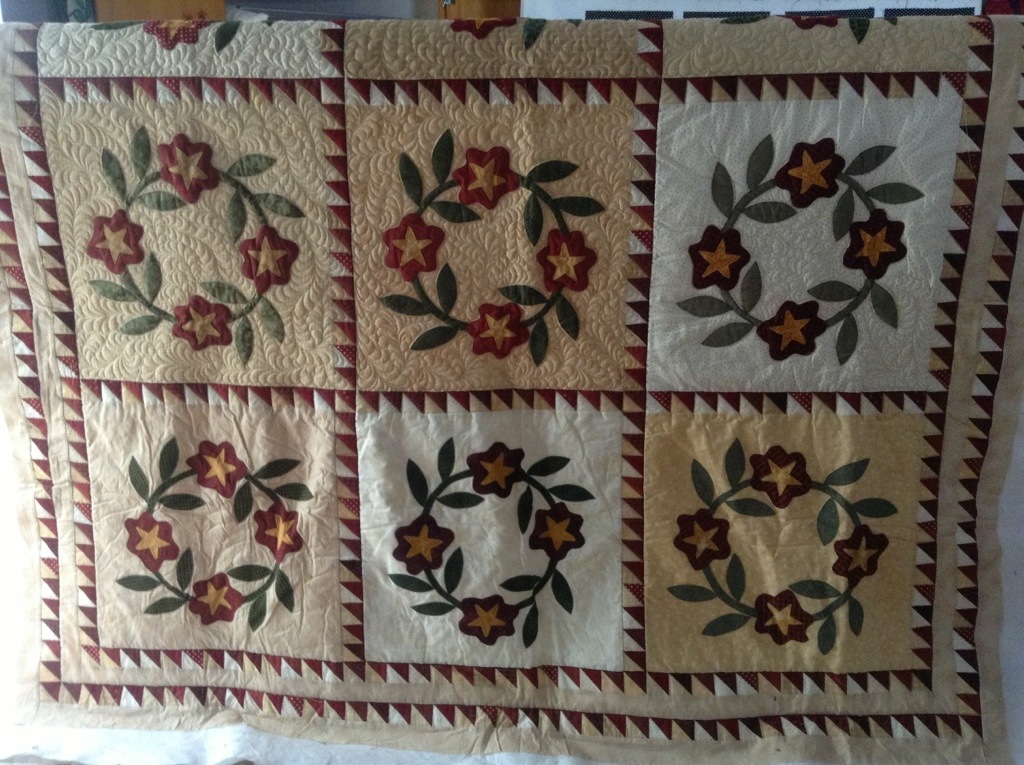 I just finished quilting something for my chiropractor’s wife (we barter. I’m not sure who gets the better deal). I thought maybe I’d work on something of my own, before doing her other 2 quilts, and discovered something shocking:

Unless things are hiding, there are only 2 unquilted quilt tops (both wallhangings) in my studio.

Everything else is either not pieced yet, or partially quilted and abandoned, waiting for me to regain interest.

In some cases, those partially quilted pieces got pulled off because I was frustrated. Some of them need quilting taken out before they can be finished. Some of them, like this one, got taken off the frame because…well, I’m not entirely sure. There’s nothing wrong with the quilting as is, I *think* that what happened was that I had to pull it off to do something else for an actual customer. And then it got shoved in a closet and forgotten.

Also, the quilting I was doing on it was pretty time-consuming, and I’m guessing my back rebelled.

I’ve been trying to thinking about the timing on this one: I used a picture of a block in the original Meandering Magic, so, that tells me that this quilt has been in this state for….somewhere around 6 years now.

I have spent some time over the past few days taking out some quilting in another top, but I think that this applique quilt is going on the frame next, to get finished, finally. The trickiest part will be figuring out what thread I was using. Someone smarter would have made note of the exact thread brand and color. I might have to make do with “close-enough.”

There might be a mental breakdown or two about how I have lost my touch and can’t possibly finish it and match the original quilting. But then I’ll slap myself and get on with it, and it’ll be just fine.