(Want to catch up on What I Did On My Summer Vacation?  All of the vacation 2012 posts are HERE.)

I’m on a roll, so I’d better keep going.

The notes I actually wrote on July 20th, day 3 in the Grand Canyon, are very short: I was exhausted. Luckily, between the four of us, when I woke up the next morning, I was able to reconstruct the memories of the previous day before they slipped away into the river of the new day’s experiences…

We started with blueberry pancakes, canteloupe and great big sausages. Some of us might have played in the sand for awhile. 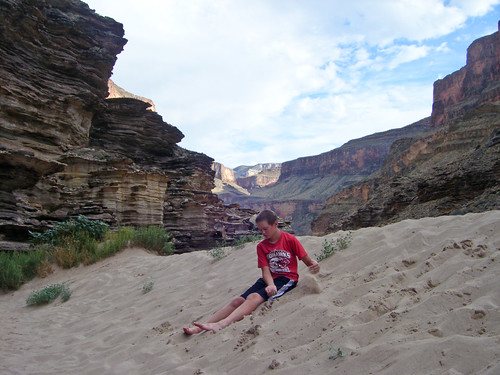 Then we all geared up in our rain jackets and pants, the ones that we thought “Really? Are you sure we need these?” — even though every packing list and e-mail from the company said “BRING RAIN JACKETS AND PANTS. FOR REAL.”

They mean it. Take rain jackets and pants. Spring for the really nice ones. You’ll want them. Especially on RAPIDS DAY. 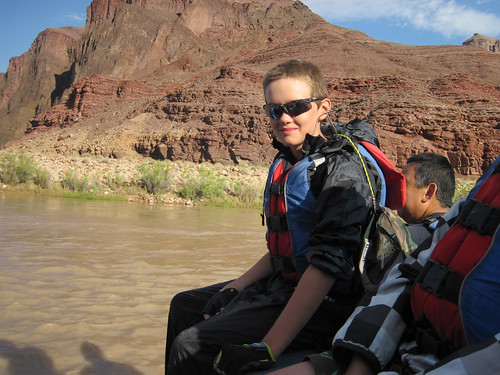 (Joe is sitting on the coolers in this picture)

The rapids were really amazing. By far, the favorite was Hermit. It was quite a ride. Mark was out front, and I was back in the “chicken coop”. One of the waves knocked Vern, one of the other passengers, loose from his seat on the coolers (right in front of the coop), and he ended up in my lap. We were sure Mark was going to be next to lose it, he was SO far up in the air, he was almost over our heads. It was really something. 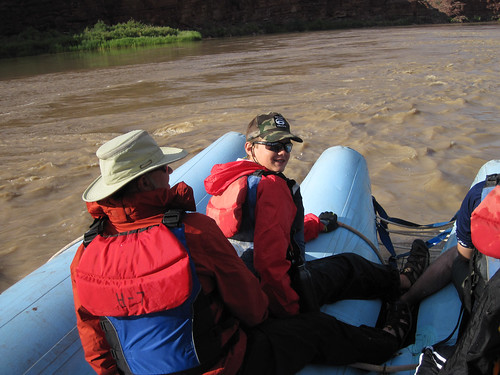 (Will was up front. He got cold and didn’t last up front very long.)

We could tell it was going to be a big ride when the motor would stop and Wiley would walk up to talk to us (the previous days, his swamper, Haley, would be the one to prep us for a rapid). He would do a pretty good job of scaring all of us, we’d run the rapid, hanging on for dear life, and then when we reached the bottom, he or Haley would come back up and tell us all of the REALLY scary stories about crazy things that had happened to other people on the rapid we had just survived. 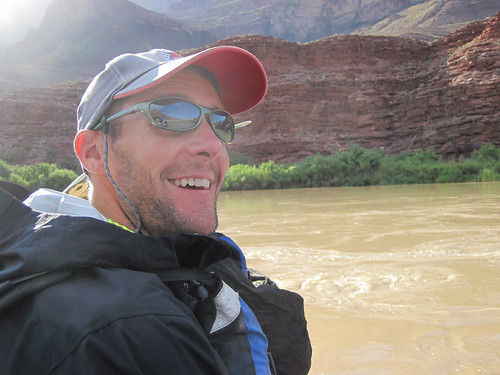 Some of the names I wrote down were Hance, Hermit and the Gem Series. I don’t remember all of the Gem Series names, but when we ran Ruby, it knocked ME off the cooler and on to Vern’s lap (who was in the chicken coop, we had traded places…). I was laughing so hard, I could barely breathe. 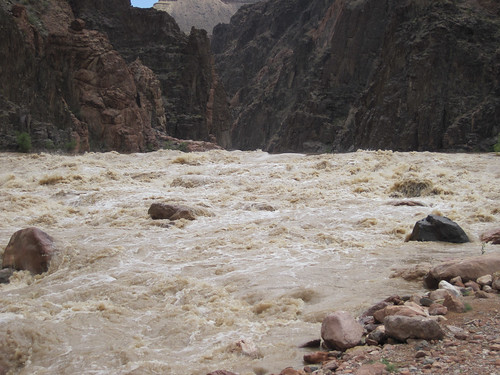 (We stopped for lunch just above Granite Rapid, the water of which is pictured above. Yikes.)

I think that Crystal Rapid was the last one of the day. We had done enough reading ahead of time to know that Crystal was a pretty gnarly rapid. It could be extremely dangerous, and as Wiley explained: anything could happen: sideways, backwards…luckily for us, he had a PERFECT Plan A run through it. (Apparently he had plan B, C, etc…mapped out just in case…). I forgot most of the details as soon as he said them, but you have to steer towards certain spots, and then steer away at just the right time, else you’ll wind up stuck or going in a crazy direction, or heaven forbid, flipped, which is a trip-ending showstopper.

I don’t mention this in my notes, but apparently this is the day we stopped at Phantom Ranch (I know this because of the photos…). It’s not so much a ranch, as a campsite, and we didn’t actually go to the campsite itself. This is the spot where trails from the rims reach the bottom of the canyon, and there’s a bridge so you can cross the river.

I’d have to look at a river map to remember the timing, but at some point we stopped at Shinimu Creek, which we hiked up through the clearest, warmest water. It was a little rough-going, as we were walking up the creekbed, on the shifting rocks, but at the top was a stunning waterfall. Everyone stood underneath to get a “shower,” and one of our guides dunked down in the pool and came up holding a fish! 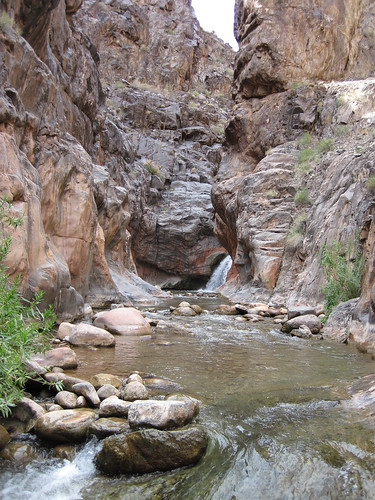 After we got back on the boat, we were hoping for the camp site that was 2 minutes away, but it was taken by a private party, so we ended up having to go quite a ways further to mile 118 (Below Elves Right was the name of the camp…). It made for an awfully long day.

After we got our camp set up, I started making notes, fell asleep, and then woke up when the music started for our Mexican Fiesta — we were all ABC — Alive Below Crystal, so we had to have a party!

I don’t know if I’ve mentioned this, but even if I did, I’ll say it again: we chose to go with Western River Expeditions, and they are HIGHLY recommended if you want to take a trip like this, or go on one of their other adventures. They were wonderful to work with, from start to finish.