So, in my last post on the subject of our trip to the Grand Canyon, I promised I wouldn’t leave my faithful followers hanging for long, and…apparently I’m a big fat liar, because that was way back on the 5th of September. Oops. (For newcomers, my family and I went on a summer vacation that included a 6 day rafting trip in the Grand Canyon. To read more, and see other pictures: Vacation 2012)
I would have gotten back to this sooner, but my computer died in October, and I have spent the last few months working on my laptop which is a great machine, but not real conducive to photo editing.

When last we spoke of this subject, the Earleys had just finished their first day in the Grand Canyon, headed for their first night sleeping on a beach under the stars. By the time the stars came out, though, I was so tired: I had a hard time staying awake to look at them. Also, there are SO FREAKING MANY STARS: it’s really hard to comprehend and focus on what you are seeing.

Despite the fact that we were in sleeping bags on cots, I think everyone slept pretty well. We woke around 5AM and had a huge breakfast of hashbrowns, thick cut bacon, eggs to order and orange juice. 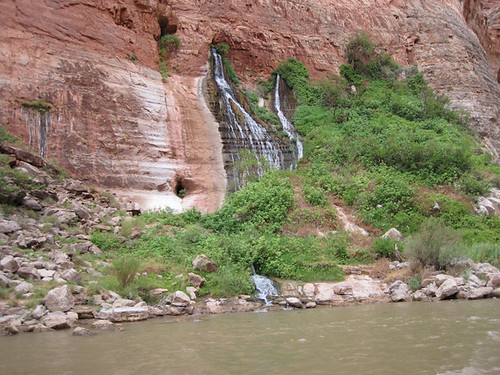 We were expecting it to be hot, but there was cloud cover and cool breezes, so it was on the chilly side most of the day. The rapids we ran were pretty mild. We continued to descend through the layers of rock, and while I wrote down the mnemonic, I not sure I can remember all of the layers themselves:

Know The Canyon’s History, Study Rocks Made By Time. (Here’s a description of the layers, with a diagram, if you are interested.)

I think our favorite layer was the Bright Angel Shale. 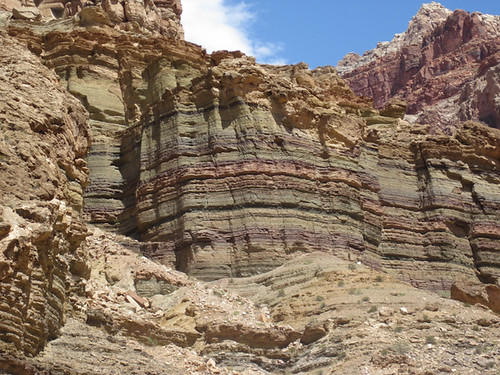 The pictures don’t do it justice, of course. Some of those layers were the most beautiful dark purple, gorgeous.

The waterfall above is called Vasey’s Paradise. One of the rapids that I wrote down was President Harding Rapid — many of the rapids or features had names like that, with stories that went with them. This one was named because the men on an expedition in 1923 heard of President Harding’s death on the radio the night before the reached it.

We took lots of pictures of rocks and rock formations, several of which are included in the gallery at the bottom of the post.

Lunch was cold cuts, fruit and chips. And cookies. Afterwards, we hiked up the Little Colorado River so we could go “swimmming” — and ride a rapid on our backs! Mostly the whole operation was a mud bath.

I decided to be brae and tried the rapid. Oh. My. I wasn’t expecting my head to go under, and it was all a little scary. I’m glad I tried it, though! Mark wasn’t going to go, but after I was brave enough to do it, he HAD to. I think he ended up doing it 3 times. Both of the boys went 7 or so times. They could have done it all day long if we’d let them. 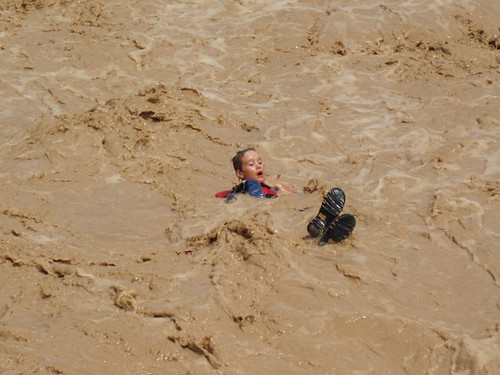 I believe that’s Joe. The water was warm and looked like chocolate milk, and you had to do your best not swallow very much of it. 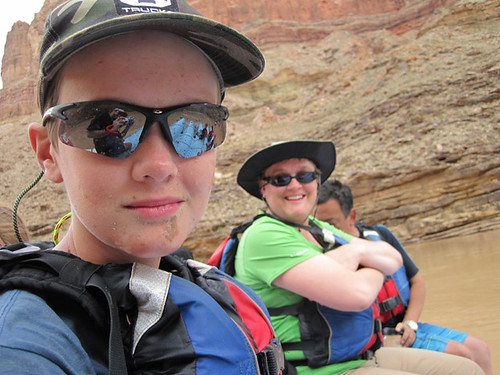 (If you look really closely, all 4 of us are actually in this picture, I knew Mark’s reflection was, but I didn’t realize until just now that Will is in the other lens!)

After the Little Colorado, we had about 30-45 more minutes before we reached out camp at Lava Canyon, Mile 66. We could hear Lava Canyon Rapid roaring just downstream from our camp. The outdoor toilet was quite a climb up loose rock, but it was at the opening of an old mine shaft and had a really amazing view. I never did think to take a camera to the toilet with me, though.

Before we had started the trip, on the first day, Wiley, our main guide, said “This is the most difficult vacation you’ll ever take.” He wasn’t kidding. Despite the sun & heat & dirt & gnats & everything else, though — it was so worth it.

I’ve got several galleries of photos here. The first is just the general “these the best pictures of the day” gallery. After that is some more pictures of people riding the rapids in the Little Colorado River. And finally, this particular night had a particularly amazing sunset. The colors of the rock, the way they glowed: a lot of us had our cameras out for quite awhile trying to capture it.

Sunset in the Grand Canyon