Day 5 was our last full day in the Canyon. One more sleep and then we’d be packing up and leaving in the morning.

Speaking of sleeping, my notes tell me it was really warm the night before, and only just cooled off in time for us to get up for breakfast, which was cereal, with MILK! There was also yogurt and bagels.

Our first rapid was Doris, and the second one (that I don’t know the name of??) was MUCh bigger than Wiley and Haley expected it to be. That’s the thing about the rapids — they are always changing. Some trips they are bigger than others, and this one must have been enough bigger (meaning: wilder ride…) than previous trips, that they made a big deal of it, and I wrote it down.

The main attraction for the day, after some more smaller rapids, was a several hour stop at Havasu Falls for hiking and swimming. (If some of this is familiar, it’s because I posted about it earlier in the month.)

The water was a beautiful turquoise and it was amazing to see it meeting up with the chocolate brown water of the Colorado.

It was a really scary hike to get to the pools, but it was worth it. I was glad I hadn’t been warned how scary it was going to be. Although, I had a clue when we tied up to the rock, instead of a nice, sandy beach. 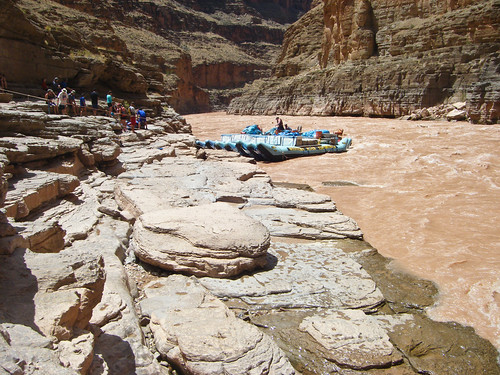 It was a pretty sheer drop to the water for quite as ways. Gorgeous, though, and when we got to the pools where some of us ended up hanging out, I was glad I had made the trek. Not that I had had an option, no one was allowed to stay back on the boats… 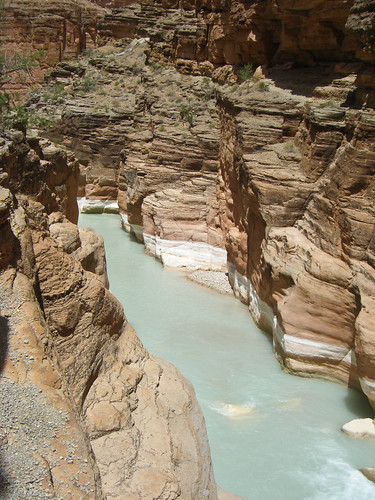 Mark walked up quite a ways to see more falls, but I found a shady spot in a pool to sit in. I played with the rocks on the bed of the creek for a very long time. It was really relaxing. 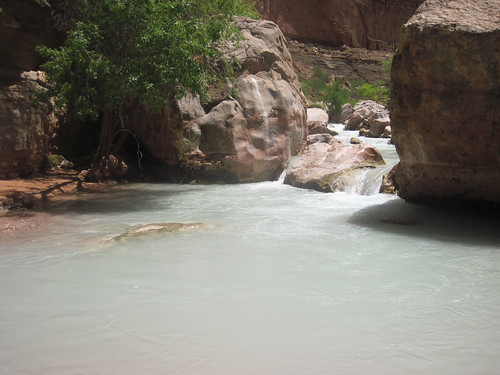 We heard lots of stories on the trip, and many of them this day, because the ride itself was a little more boring. Haley read several really funny stories from a book called There’s This River (which we ended up buying and enjoying…), lots of boatmen stories, one about peeing in the river that had all of us roaring with laughter.

Our guides were really surprised by the changes to National Canyon, which I didn’t manage to take pictures of. Most of them had been through the canyon on a trip about 2 weeks previous to this one: between then and the time of our trip, a flash flood had come through and completely covered what used to be a big beach and campsite with massive boulders.

At out last pit stop we were invited to a Captain’s Dinner, and informed that we had to dress up: using our bedsheets! No sheet: no eat.

Most of us used our sheets at Togas, but my boys had to be different: 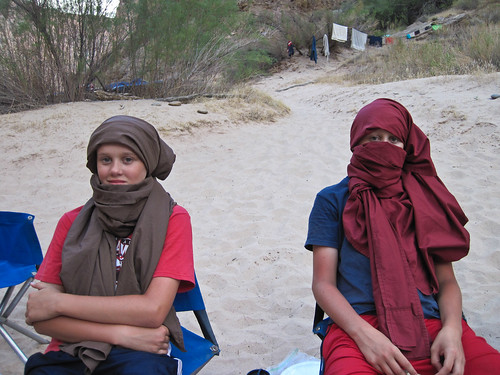 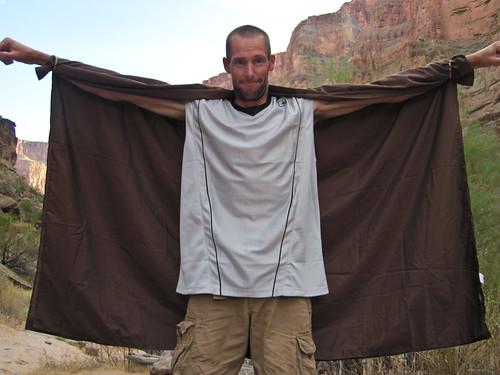 At each meal, Wiley would call us with the conch shell. He had pretty healthy lungs and could keep the sound up for quite some time: 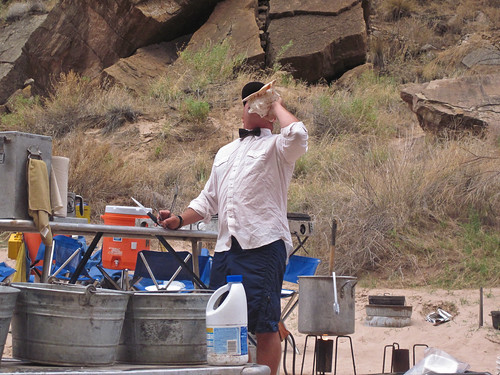 Supper that night was steak (huge), baked potatoes (also huge), and green beans. Oh, and shrimp cocktail for the appetizer. Dessert was chocolate cake and a yellow cake, both frosted.

And ice cream. On day 5. Ice. Cream. It was delicious. Our lovely crew did bring dress up clothes: they were so amazing. Friendly, funny, and extremely good at their jobs: 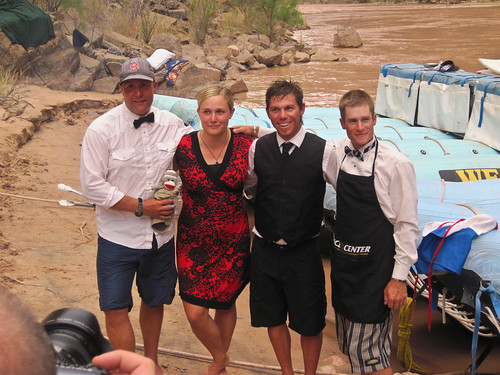 Our camp was at a place called Below Red Slide, a nice sandy barefoot camp — some of our camps were rocky, and shoes were required. I washed my hair before supper for the first time in several times. It felt spectacular, even if it required dunking my head in the frigid river water to do it.

As you can see: I desperately needed it, my hair situation was dire: 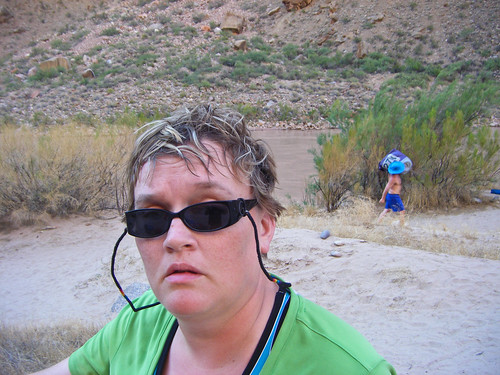