I have reached the point in this storytelling that I’m just going to get it over, darn it, so please bear with me as I continue to tell you What I Did on My Summer Vacation. I figure if nothing else, I’d better finish this story while it is still 2012.

With Rapid Day behind us, we were on to Pretty Waterfall Day.

We woke to the singing of the Canyon Wrens, and I’ve got to tell you, they did not sound quite real. I thought they sounded a lot like cartoon birds, honestly. (Here’s a site that has an example: Canyon Wren Song, there’s a little player in the middle of the page that you can click on to listen to the song.)

It drizzled on us two nights in a row, the previous night was so hot, I didn’t even bother to cover up, I just let the rain cool me off. THe cloud cover was nice, it kept it cooler than it might have otherwise been, however it would have been nice for clearer skies, so we could see more stars. 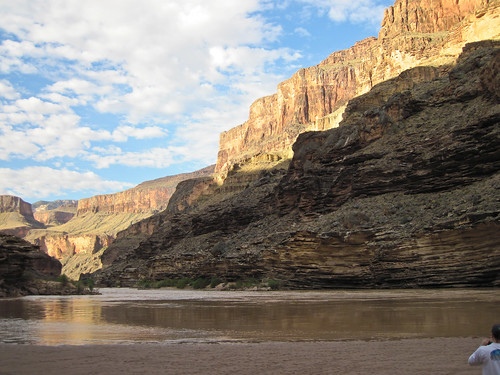 Breakfast was massive pork chops and french toast. After I get through all of the days of the trip, I’m going to go back and do a “practicalities” post: about the food and camping and the call of nature, and I don’t mean bird calls.

I decided to ride up front for most of the day, and wound up wishing for bigger rapids, and that I’d been brave enough to try it the day before. Choosing a seat on the boat for rapids is a tricky thing: the most adventuresome ride is up front, that’s the most like a roller coaster, but you can’t actually SEE anything. When they tell you to suck rubber, you put your head down and hang on for dear life. The other spots on the boat are a little tamer, but they offer the advantage of being able to watch the great big hole that you are getting ready to drop down into.

One of our first stops was Blacktail Canyon, where we got to walk up a slot canyon and then we stopped for awhile to listen to Wiley read some of his favorite quotes and some stories. (He read from a book by David Lee, The Porcine Canticles, it was ridiculously funny, especially maybe because some of us were getting to that giddy stage of the vacation where EVERYTHING is funnier.) 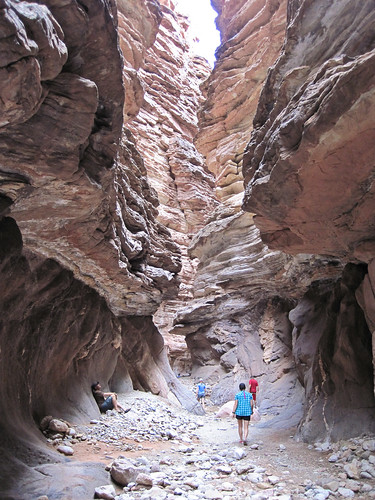 We also stopped at Stone Creek, and walked up the creek bed, which was like pea gravel. That had a beautiful waterfall that everyone stood in and had their pictures taken. 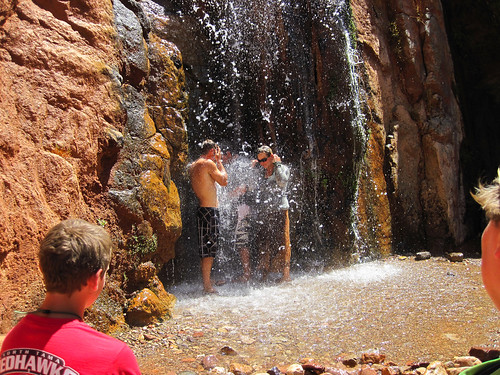 (Three of our four guides taking their daily shower.)

Deer Creek was another stop, with a short hike to a really super strong waterfall that no one could get all the way under, the force of the water just pushed you right back out. 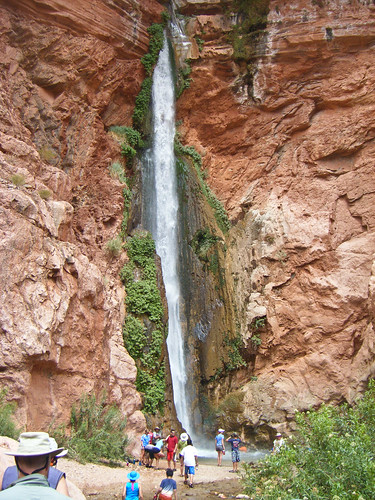 Will and I stayed at the base of the waterfall, while Joe and Mark went with a bunch of the rest of the group for a hike up to the top of Deer Creek Waterfall. It was a pretty strenuous hike, with a little bit of climbing, and it was very hot. Sounds like those that went enjoyed it, but all agreed that I was safest where I was.

At some point during the day we passed through Granite Narrows, the river’s narrowest point at just 76 feet. I’m not sure where we ate lunch, it was just cold cuts again, and there wasn’t much shade. 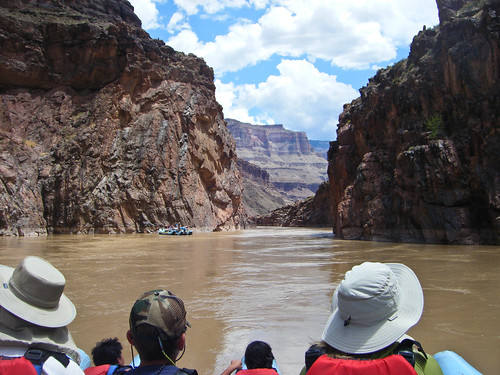 Johnny, one of the guides, doctored an Oreo: broke it apart, took out some of the filling and put in horseradish sauce. No one would admit to have eaten it, though. It was pretty funny to watch the guides watch everyone else, trying to figure out who might have gotten the spiked Oreo.

Each evening, one of the guides would make announcements — plans for the next day, things we needed to know, etc…and this night it was Johnny’s turn. He stood next to the table, with his handresting on a Dutch Oven that we were all sure was full of chocolate cake or some other fancy dish. You should have heard us all gasp when he pulled the top off and it was full of different kinds of candy bars!

Invariably the day’s plans ultimately boiled down to “Head downstream.” By the end, we were all trained for when it was time for Wiley to say that, and we’d say it with him.

Right now, as I read through my notes and sort through the pictures, I’d like nothing better than to have nothing more to do than hop on the coolers, hang on and have someone take me down the Colorado River.