Life conspired (in good ways, not bad) to make it so that I wasn’t able to take beauty shots of the applique quilt I posted about the other day. Also, I decided I wanted the binding at least attached, if not finished, before I took pictures, because it definitely looks better this way, with the final thin frame of red: 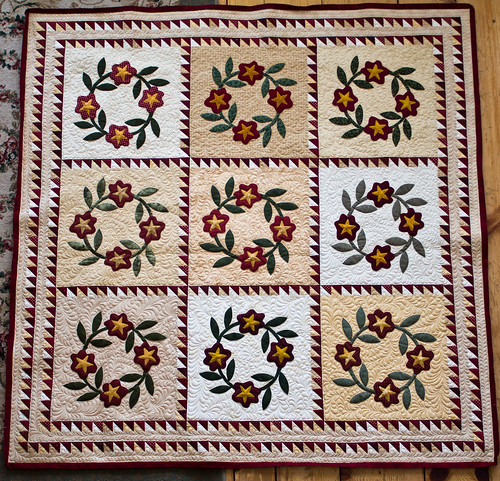 You’ll have to forgive me: it’s been so long since I made the quilt top, I couldn’t even begin to remember the name of the actual pattern or the designer. I would like to have a name for this quilt, so if anyone has any suggestions besides “Quilt That Took More Years Than It Should Have,” let me know. 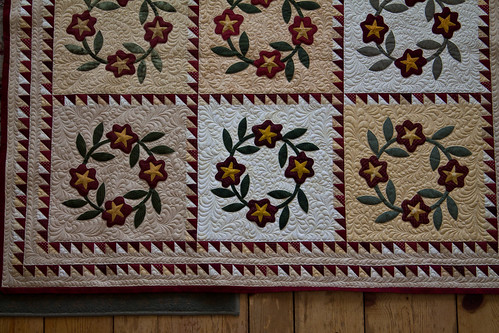 When I put this back on the frame the other day, I had 4 entire blocks to do, plus most of the feathers in the borders. (one full side was done of the borders, the rest had some outline stitching done, but not all of it.) 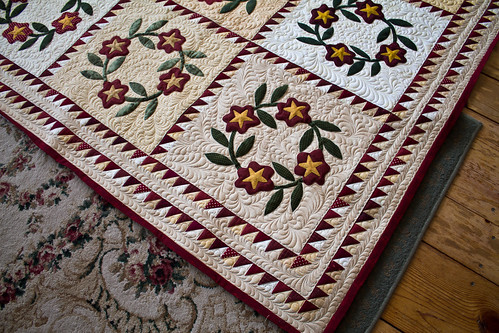 I had to throw on the invisible thread and do a bunch of the outline stitching, too. Luckily the thread mostly behaved. 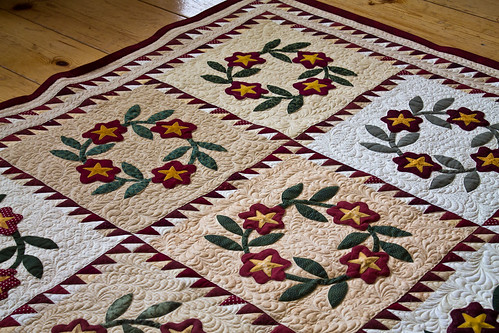 I’m even fairly confident that the thread I grabbed to do the feathers is the actual thread (or the same color/kind) that I had been using all those years ago when I started quilting this. (Signature Cotton, Sand Dollar). 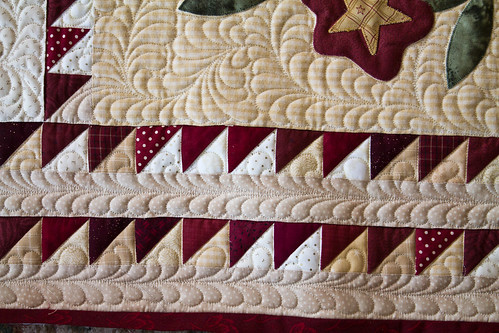 I don’t know why, but this quilt has a double batting. I hate quilting through double battings. I have never had good luck with it, and really wish I hadn’t put two layers in this. It is very stiff, which is OK, because eventually it’s going to hang on the way, and no one has to try to cuddle under it. I suppose it would soften with washing, but I still wish I hadn’t done it. On the other hand, the stitching does have nice definition.

I have no idea if I had fabric planned for the binding, and if I did, it’s probably long been used for something else. Luckily I have a lot of dark red in my stash…

The applique itself is a blanket stitch, done on the machine. I think this might have been the very first full quilt top I finished that had applique on it, so I was pretty pleased with myself at the time. I wish I had followed through and been enjoying this quilt sooner.

Starting to quilt this was a little bit nerve-wracking: what if I don’t remember what to do??? But as soon as I turned on the machine and started creating feathers, all of the muscle memory was still there. The feathers flowed as if I had just stepped away from this a few days ago, not several years.