I didn’t mean to do it, but I ended up staying up last night for the midnight (on the east coast…) launch of the Digital Writing Month project. The challenge launched at midnight was a collaborative poetry project.

It was, in a word, fascinating.

At midnight, a Google Document was opened to collaborators, with a list of rules at the top: each participant must contribute one word, must move one word, and could add or delete one punctuation mark.

Those of you that don’t know, a Google Doc is editable by up to about 50 people at one time, and you can watch the editing happen…words jump around, cursors appear and reappear, words start to appear, and then get backspaced as the typist realizes their spelling mistakes…you couldn’t delete anyone else’s word, but you could change or delete your own. Different phrases would appear and then be broken up as words got moved.

The document was open for an hour, and then that was it: no more edits. Towards the end, people started to edit the rules, and someone decided that you could add bold/italics/color/highlights. I think some of my favorite turns of phrases appeared more towards the midway point. It felt like towards the end, some of the changes were made for the sake of change. And maybe a little silliness. It was late, some people were getting punchy, I think.

You can go read the whole poem. It is only 60 words long. My word was “remarkable.”

This poem was about the process, not the product. In the midst of the experience, lots of people were discussing the poem, and other stuff, too, on Twitter, which is another interesting experience that I’m learning about….

One of the things that I was introduced to, was the concept of Book Spine Poetry. I decided to try my hand at this today, and I have to tell you: it is much harder than I thought it was going to be. Which books to choose, what story was I trying to tell. Was I making it harder than it needed to be? (Well, we know that the answer to that last one is usually a resounding YES….) 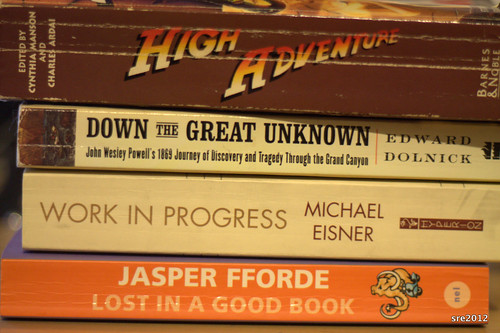 High Adventure,
down the great unknown, work in progress…
Lost in a good book!

{that last is a bit of wishful thinking. I hope that some day I can write a “good” book that people will want to get lost in.}
In addition to all of this blathering here, I do actually have about 500 words started on what I’m calling a novel-shaped idea. Not a novel, just an idea sort of shaped like a novel…I can’t decide how much of that writing is going to get shared or stay private for now. Mostly private. We’ll see.
I’m a little too tired to do much more tonight — between the late night, and a long day at work that included a trip to the doctor with a sick kid…put a fork in me….