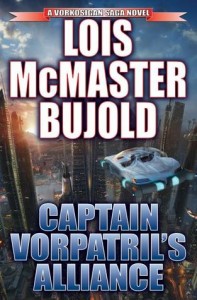 Kid-rating: Themes are more appropriate for a late-teen/grown-up, but there is no bad language (that I can remember…) and the romantic situations are mild. I would let my 13-year olds read this.

Book Fourteen in the best-selling Vorkosigan series. Captain Ivan Vorpatril is happy with his relatively uneventful bachelor’s life of a staff officer to a Barrayaran admiral.  Ivan, cousin to Imperial troubleshooter Miles Vorkosigan, is not far down the hereditary list for the emperorship.  Thankfully, new heirs have directed that headache elsewhere, leaving Ivan to enjoy his life on Komarr, far from the Byzantine court politics of his home system.

But when an old friend in Barrayaran intelligence asks Ivan to protect an attractive young woman who may be on the hit list of a criminal syndicate, Ivan’s chivalrous nature takes over.  It seems danger and adventure have once more found Captain Vorpatril. Tej Arqua and her half-sister and servant Rish are fleeing the violent overthrow of their clan on free-for-all planet Jackson’s Whole.

Now it seems Tej may possess a hidden secret of which even she may not be aware.  It’s a secret that could corrupt the heart of a highly regarded Barayarran family and provide the final advantage for the thugs who seek to overthrow Tej’s homeworld.  But none of Tej’s formidable adversaries have counted on Ivan Vorpatril.  For behind Ivan’s faÇade of wry and self-effacing humor lies a true and cunning protector who will never leave a distressed lady in the lurch–up to and including making the ultimate sacrifice to keep her from harm: the treasured and hard-won freedom from his own fate as a scion of Barrayar.

LMB is my all time favorite author, and I am a huge fan of the Vorkosigan’s. Needless to say, I was beyond thrilled when I heard that she had a new book on its way, and it was about IVAN of all people. I love Miles** (the main character of most of the other books in the series) beyond reason, but I’ve also always had a very soft spot for Ivan. None of his family has been able to figure out that just because he’s-not-like-Miles doesn’t mean he is less-than-Miles, and I was glad to see him get a story of his own.

I managed to avoid all spoilers about this book, and refused to be tempted by the e-ARCs that was available from Baen Books months ago, all because I wanted to be able to read this for the first time in hardcover. I was not disappointed. This was a very satisfying visit to the world of the Vorkosigan’s and it had plenty of good cameos from nearly all of my favorite characters.

Having said that: I’m not sure I would recommend this is as a point of entry in to the series. I think a new reader would enjoy it, but there are so many references that were made more meaningful to me because I knew the rest of the story. I’m die-hard enough about this series that I really think you should start all the way back at the beginning with Cordelia’s Honor and then work your way forward.

And know that I am jealous of you, starting these books fresh, because as much as I love re-reading them, I would dearly love to go back and read them all again “for the first time” — they are that good.

Yes, I know they are space opera, but that doesn’t really matter. They are good stories with amazing characters.

**As proof of my adoration: I named my cat Miles….