You are here: Home / Blog / Other / Post Prom Reflections

Will took the pictures, he did a pretty good job! 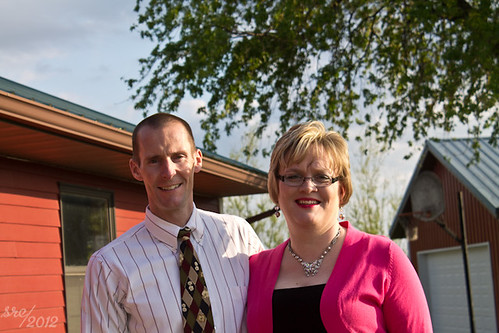 I tried to talk Mark into a pink tie, but I never got around to actually buying one, I think he would have worn it if I had presented it to him. He also learned that he maybe needs to get some solid colored shirts, apparently stripes are out. 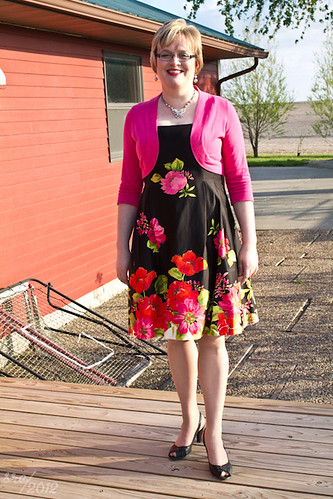 The necklace is a bejeweled butterfly. While I was waiting for the chemicals to do their trick on my hair on Friday, I wandered around looking at jewelry, and fell in love with several pieces. I decided on this one for a couple of reasons, not least of which was that it was significantly less expensive than the other options. I figured it went with the dress, with the flowers/butterflies/etc…plus, it made me think of my Grandma, who collected all things butterfly.

It was funny getting dressed thinking about how the girl in the green dress from yesterday’s post didn’t need the extra special undergarments that her future self requires. Spanx (or their generic equivalents…) are a Godsend.

Prom itself was fun. The food was good, and the company was fun (we got to sit at the special teachers table in the corner). We were as far away from the music as you could get, and we were right next to the Sunken Ship, which was the site of the photography station. The decorations were impressive: the walls of the entire room had been covered with dark blue paper (sort of like the stuff you use to cover banquet tables…). Lots of twinkle lots and cardboard fish and many tiny clever touches, like the Goldfish crackers on the salad, instead of croutons…

The dresses, of course, were beautiful, although there were a few that left me wondering things like (a) who would have actually designed that and (b) what does it say about the taste of the person that chose to wear it…not that any of them were, inappropriate, but I did think of Barbie several times, and little girl fantasies about what a fancy dress should look like.

I was also surprised by the amount of orange. Now, don’t get me wrong, orange is a nice color, but a little bit of orange goes a long way, and there were several girls who were wearing an awful lot of orange. Or rather Orange, with a capital O.

I saw one hoop skirt (how did she sit to eat? did she crowd out the rest of her companions?), and only one girl that made me worry she was going to fall out the top of her dress. Two girls in cowboy boots and one wearing a tux.

The boys were all handsome in their tuxes — mostly black, a few white and at least one that I’m pretty sure was brown. Lots of them with their sunglasses pushed up on their heads, even for the pictures, which I thought was weird. I would have made my date pull his glasses off. One young man caught our eye, but only because we noticed his orange tie. The rest of his tux (and cowboy hat!) was a camo print, so he kinda blended in.

So, that’s my prom report. I hope the kids all had a good time, and made good choices. Prom itself lasted until about 11:30, and then they all headed home to change, so they could come back for the After Prom party — I think there was more food, a hypnotist and I don’t know what else…maybe more dancing?

I was in bed by 10:30, and I was so lazy, I didn’t get up until nearly 10 this morning…feeling pretty smug that I didn’t have to be back the dance site this morning to help tear down…like the juniors did…I bet they were pretty bleary-eyed…