Today’s outgoing mail included a bill (yippee!) and postcards to Ukraine, Netherlands, Russia and Poland! I signed up to exchange postcards on a site called PostCrossing. I didn’t actually have any postcards on hand, but luckily, some of the stores in town carry postcards that show off the Winding Staircase.

(Fun fact: the town motto is Wind Up In Traer) 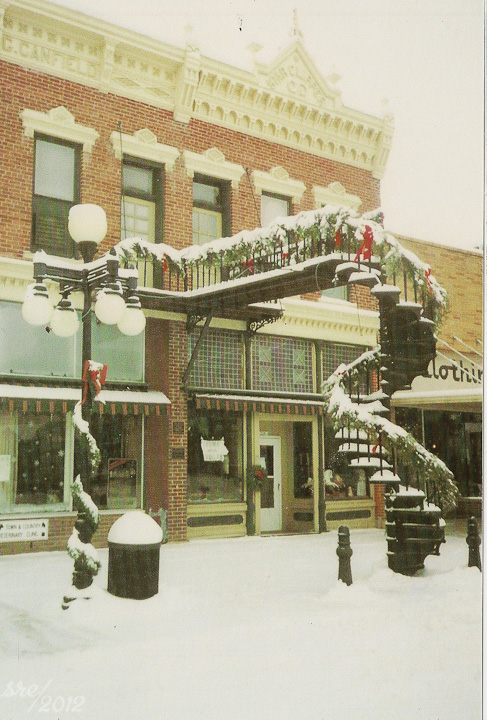 I’m not sure when this particular photo was taken. The Vet’s office is still in that building to the left, but it hasn’t had that sign under the window since I’ve lived here, which is going on 11 years. The sign in the storefront straight ahead tells me that this was taken when it was still the quilt shop — which has been closed for 4 or 5 years. That’s the spot where I first had my quilting machine, lo, these many years ago. (Seriously: it’s been 10 years…)

And we have not seen snow like that in ages. Crazy weather this year. Nice and mild, but weird.

From the back of the postcard:

Traer’s Famed Winding Staircase, Traer, Iowa. Believed to be the only outdoor winding staircase with a catwalk leading to a second-story business, this unique staircase was built in 1894 by Burlington Iron Works, leading to what was once the office of the Traer Star-Clipper, the town’s newspaper.

I’ve managed to mail something interesting (at least, I hope my recipients think it’s interesting) every day. I didn’t get yesterday’s mail to the post office until after 8PM, so it wouldn’t have gone out until today, but I’m still counting it as a win.

I’ve been saving some Valentine’s to mail closer to the day, and it occurred to me this morning that the day is nearly here and I’d better get them out, so those will be on their way in tomorrow’s mail.

Ironically, I actually sent several hundred pieces of mail today: today is a professional development day for the teachers, so students were off, but I had to go in to finish stuffing and mailing midterm reports. We send home reports for students who aren’t doing well, so for me, it’s really a pretty depressing job. Some aren’t surprising, but I find myself acting somewhat parental thinking “Doggone it, So-and-So, you need to get yourself together!” as if these are my own kids. I can only imagine how unhappy some of these parents are going to be to get the efforts of my labor…and sadly, some of the parents aren’t even going to care.

I did have a funny mail experience the other day, though, that seemed ironic what with the challenge and all…a student who was doing some work for a teacher needed to mail something. She was mailing a stack of papers in a large manila envelope and had written the address for the recipient, but then she had to ask me where she was supposed to put the return address! I guess I’d better make sure my boys know how to write a letter. I’d hate for them not to know what to do when they want to write a love letter to a girl…